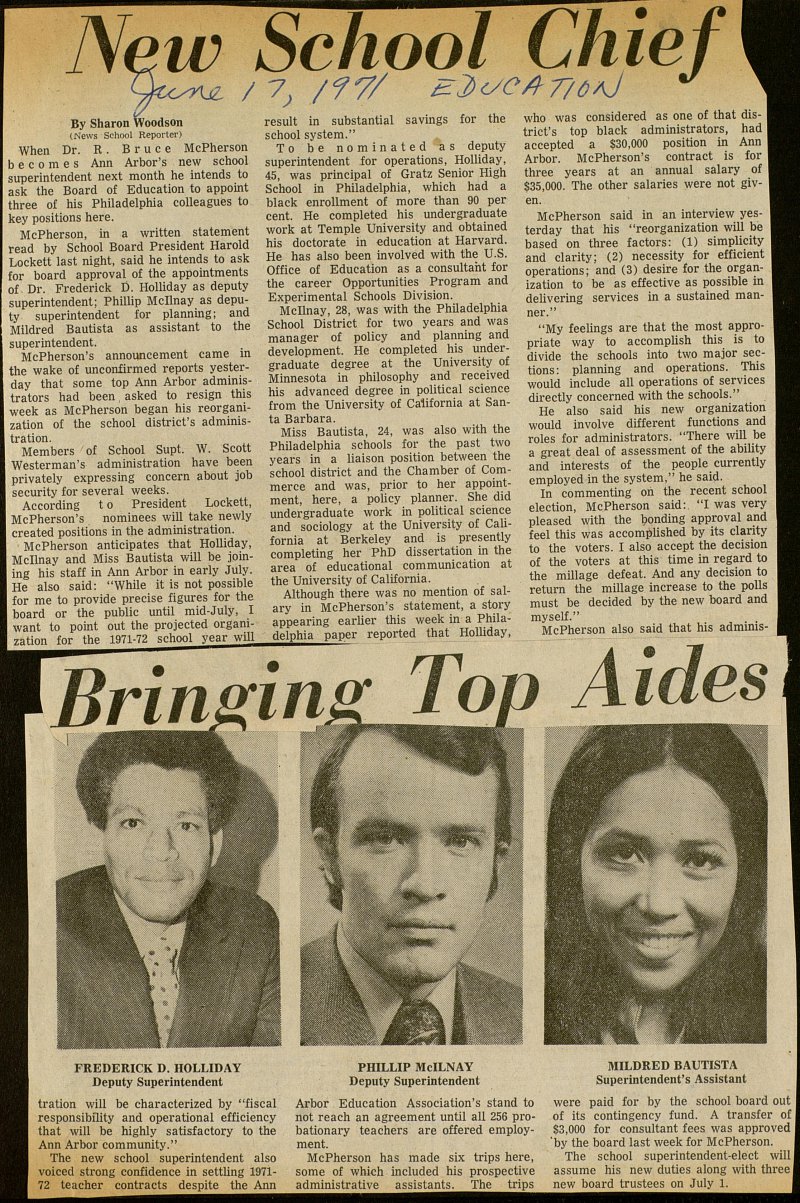 When Dr. R . Bruce McPherson b e c o m e s Ann Arbor's new school superintendent next month he intends to ask the Board of Education to appoint three of his Philadelphia colleagues to key positions here. McPherson, in a written statement read by School Board President Harold Lockett last night, said he intends to ask for board approval of the appointments of Dr. Frederick D. Holliday as deputy superintendent; Phillip Mcllnay as deputy superintendent for planning; and Mildred Bautista as assistant to the superintendent. McPherson's announcement came in the wake of unconfirmed reports yesterday that some top Ann Arbor administrators had been asked to resign this week as McPherson began his reorganization of the school district's administration. Members of School Supt. W. Scott Westerman's administration have been privately expressing concern about job security for several weeks. According to President Lockett, McPherson's nominees will take newly created positions in the administration. McPherson anticipates that Holliday, Mcllnay and Miss Bautista will be joining his staff in Ann Arbor in early July. He also said: "While it is not possible for me to provide precise figures for the board or the public until mid-July, I want to point out the projected organization for the 1971-72 school year will_ result in substantial savings for the school system." To be nominated as deputy superintendent for operations, Holliday, 45, was principal of Gratz Senior High School in Philadelphia, which had a black enrollment of more than 90 per cent. He completed his undergraduate work at Temple University and obtained his doctorate in education at Harvard. He has also been involved with the U.S. Office of Education as a consultant for the career Opportunities Program and Experimental Schools Division. Mcllnay, 28, was with the Philadelphia School District for two years and was manager of policy and planning and development. He completed his undergraduate degree at the University of Minnesota in philosophy and received his advanced degree in political science from the University of California at Santa Barbara. Miss Bautista, 24, was also with the Philadelphia schools for the past two years in a liaison position between the school district and the Chamber of Commerce and was, prior to her appointment, here, a policy planner. She did undergraduate work in political science and sociology at the University of California at Berkeley and is presently completing her PhD dissertation in the area of educational communication at the University of California. Although there was no mention of salary in McPherson's statement, a story appearing earlier this week in a Philadelphia paper reported that Holliday, who was considered as one of that district's top black administrators, had I accepted a $30,000 position in Ann I Arbor. McPherson's contract is for I three years at an annual salary of I $35,000. The other salaries were not I en. McPherson said in an interview yesterday that his "reorganization will be I based on three factors: (1) simplicity I and clarity; (2) necessity for efficient I operations; and (3) desire for the organization to be as effective as possible in I delivering services in a sustained manner." ! "My feelings are that the most appropriate way to accomplish this is to divide the schools into two major sections: planning and operations. This would include all operations of services directly concerned with the schools." He also said his new organization would involve different functions and roles for administrators. "There will be a great deal of assessment of the ability and interests of the people currently employed in the system," he said. In commenting on the recent school election, McPherson said: "I was very pleased with the bonding approval and feel this was accomplished by its clarity to the voters. I also accept the decision of the voters at this time in regard to the millage defeat. And any decision to return the millage increase to the polls must be decided by the new board and myself." McPherson also said that his administration will be characterized by "fiscal responsibility and operational efficiency that will be highly satisfactory to the Ann Arbor community." The new school superintendent also voiced strong confidence in settling 197172 teacher contracts despite the Ann Arbor Education Association's stand to not reach an agreement until all 256 probationary teachers are offered employment. McPherson has made six trips here, some of which included his prospective administrative assistants. The trips were paid for by the school board out of its contingency fund. A transfer of $3,000 for consultant fees was approved 'by the board last week for McPherson. The school superintendent-elect will assume his new duties along with three new board trustees on July 1.