U Hints At Dropping Payments To Schools 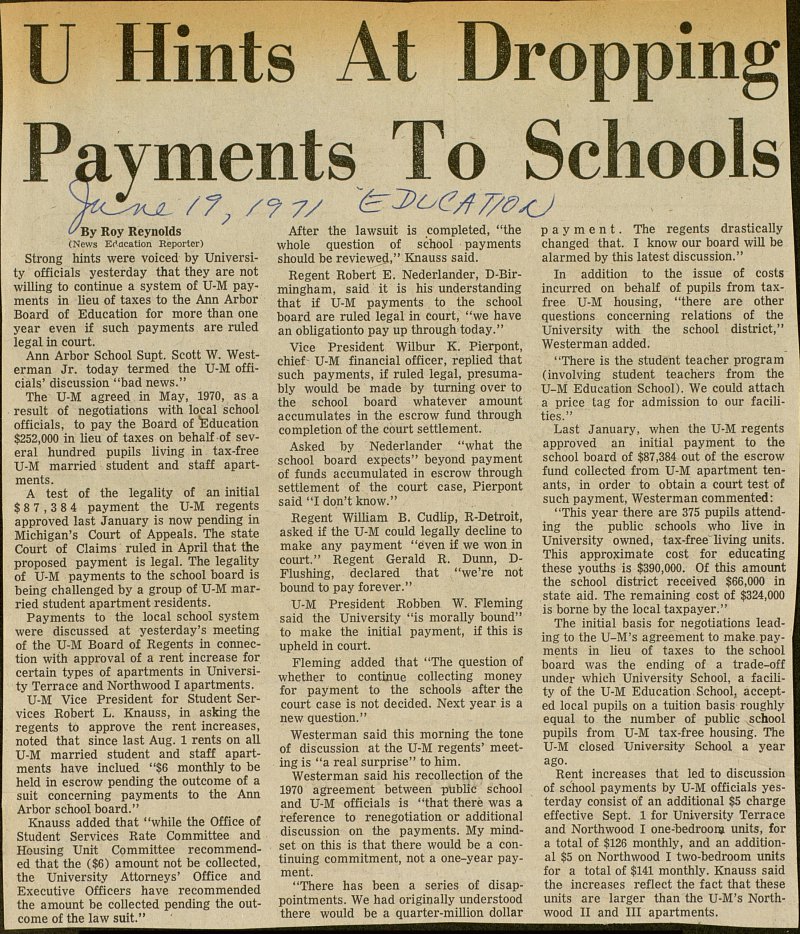 Strong hints were voiced by University officials yesterday that they are not willing to continue a system of U-M payments in lieu of taxes to the Ann Arbor Board of Education for more than one year even if such payments are ruled legal in court. Ann Arbor School Supt. Scott W. Westerman Jr. today termed the U-M officials' discussion "bad news." The U-M agreed in May, 1970, as a result of negotiations with local school officials, to pay the Board of Education $252,000 in lieu of taxes on behalf of several hundred pupils living in tax-free U-M married student and staff apartments. A test of the legality of an initial $87,384 payment the U-M regents approved last January is now pending in Michigan's Court of Appeals. The state Court of Claims ruled in April that the proposed payment is legal. The legality of U-M payments to the school board is being challenged by a group of U-M married student apartment residents. Payments to the local school system were discussed at yesterday's meeting of the U-M Board of Regents in connection with approval of a rent increase for certain types of apartments in University Terrace and Northwood I apartments. U-M Vice President for Student Services Robert L. Knauss, in asking the regents to approve the rent increases, noted that since last Aug. 1 rents on all U-M married student and staff apartments have inclued "$6 monthly to be held in escrow pending the outcome of a suit concerning payments to the Ann Arbor school board." Knauss added that "while the Office of Student Services Rate Committee and Housing Unit Committee recommended that the ($6) amount not be collected, the University Attorneys' Office and Executive Officers have recommended the amount be collected pending the outcome of the law suit." After the lawsuit is completed, "the whole question of school payments should be reviewed," Knauss said. Regent Robert E. Nederlander, D-Birmingham, said it is his understanding that if U-M payments to the school board are ruled legal in court, "we have an obligation to pay up through today." Vice President Wilbur K. Pierpont, U-M financial officer, replied that such payments, if ruled legal, presumably would be made by turning over to the school board whatever amount accumulates in the escrow fund through completion of the court settlement. Asked by Nederlander "what the school board expects" beyond payment of funds accumulated in escrow through settlement of the court case, Pierpont said "I don't know." Regent William B. Cudlip, R-Detroit, asked if the U-M could legally decline to make any payment "even if we won in court." Regent Gerald R. Dunn, D-Flushing, declared that "we're not bound to pay forever." U-M President Robben W. Fleming said the University "is morally bound" to make the initial payment, if this is upheld in court. Fleming added that "The question of whether to continue collecting money for payment to the schools after the court case is not decided. Next year is a new question." Westerman said this morning the tone of discussion at the U-M regents' meeting is "a real surprise" to him. Westerman said his recollection of the 1970 agreement between public school and U-M officials is "that there was a reference to renegotiation or additional discussion on the payments. My mindset on this is that there would be a continuing commitment, not a one-year payment. "There has been a series of disappointments. We had originally understood there would be a quarter-million dollar p a y m e n t . The regents drastically changed that. I know our board will be alarmed by this latest discussion." In addition to the issue of costs incurred on behalf of pupils from taxfree U-M housing, "there are other questions concerning relations of the University with the school district," Westerman added. "There is the student teacher program (involving student teachers from the U-M Education School). We could attach a price lag for admission to our facilities." Last January, when the U-M regents approved an initial payment to the school board of $87,384 out of the escrow fund collected from U-M apartment tenants, in order to obtain a court test of such payment, Westerman commented: "This year there are 375 pupils attending the public schools who live in University owned, tax-free" living units. This approximate cost for educating these youths is $390,000. Of this amount the school district received $66,000 in state aid. The remaining cost of $324,000 is borne by the local taxpayer." The initial basis for negotiations leading to the U-M's agreement to make.payments in lieu of taxes to the school board was the ending of a trade-off under which University School, a facility of the U-M Education School, accepted local pupils on a tuition basis roughly equal to the number of public school pupils from U-M tax-free housing. The U-M closed University School a year ago. Rent increases that led to discussion of school payments by U-M officials yesterday consist of an additional $5 charge effective Sept. 1 for University Terrace and Northwood I one-bedroom units, for a total of $126 monthly, and an additional $5 on Northwood I two-bedroom units for a total of $141 monthly. Knauss said the increases reflect the fact that these units are larger than the U-M's Northwood II and III apartments.