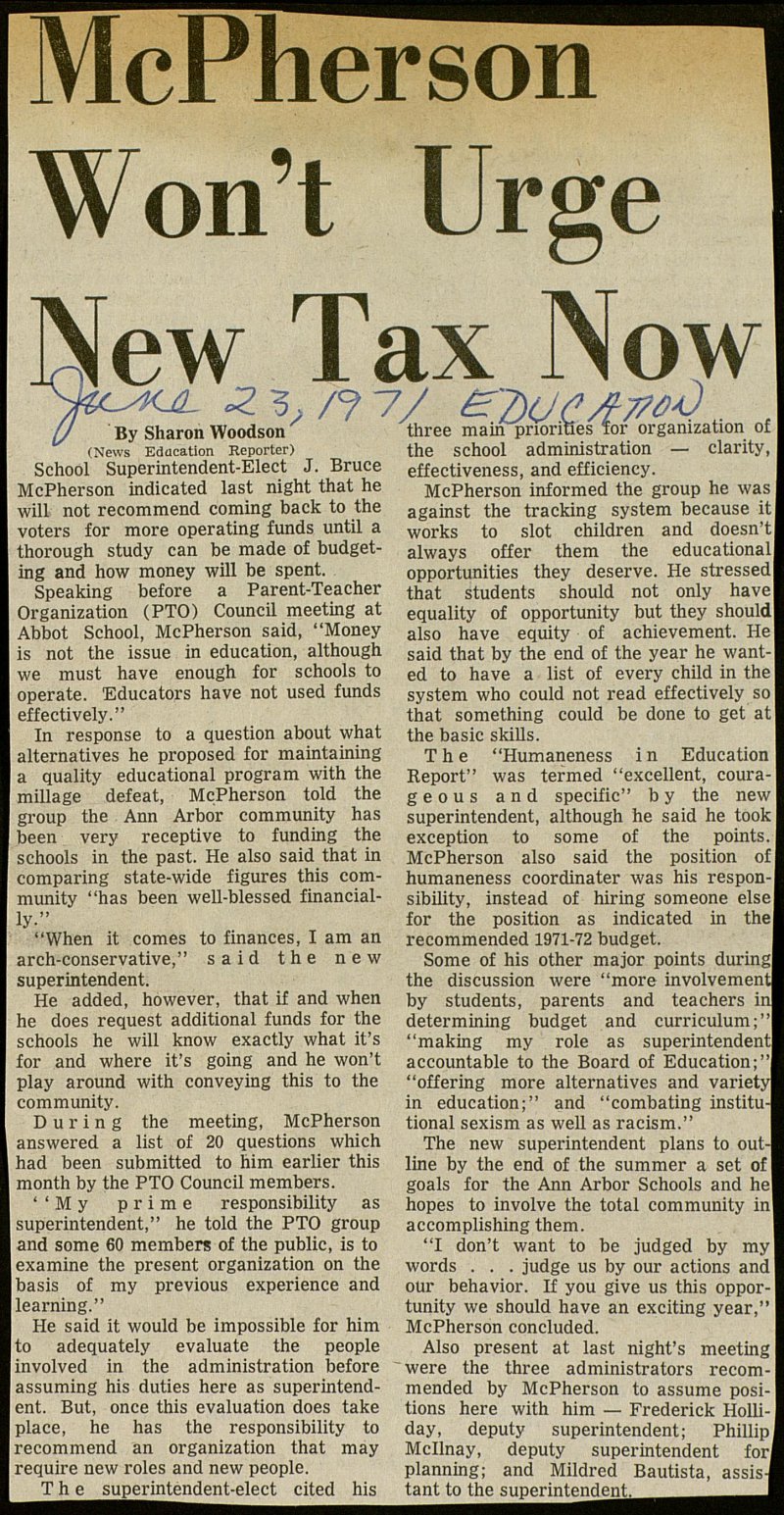 School Superintendent-Elect J. Bruce McPherson indicated last night that he will not recommend coming back to the voters for more operating funds until a thorough study can be made of budgeting and how money will be spent. Speaking before a Parent-Teacher Organization (PTO) Council meeting at Abbot School, McPherson said, "Money is not the issue in education, although we must have enough for schools to operate. Educators have not used funds effectively." In response to a question about what alternatives he proposed for maintaining a quality educational program with the millage defeat, McPherson told the group the Ann Arbor community has been very receptive to funding the schools in the past. He also said that in comparing state-wide figures this community "has been well-blessed financially." "When it comes to finances, I am an arch-conservative," said the new superintendent. He added, however, that if and when he does request additional funds for the schools he will know exactly what it's for and where it's going and he won't play around with conveying this to the community. D u r i n g the meeting, McPherson answered a list of 20 questions which had been submitted to him earlier this month by the PTO Council members. ' ' M y prime responsibility as superintendent," he told the PTO group and some 60 members of the public, is to examine the present organization on the basis of my previous experience and learning." He said it would be impossible for him to adequately evaluate the people involved in the administration before assuming his duties here as superintendent. But, once this evaluation does take place, he has the responsibility to recommend an organization that may require new roles and new people. T h e superintendent-elect cited his three main priorities for organization of the school administration - clarity, effectiveness, and efficiency. McPherson informed the group he was against the tracking system because it works to slot children and doesn't always offer them the educational opportunities they deserve. He stressed that students should not only have equality of opportunity but they should also have equity of achievement. He said that by the end of the year he wanted to have a list of every child in the system who could not read effectively so that something could be done to get at the basic skills. The "Humaneness in Education Report" was termed "excellent, courageous and specific" by the new superintendent, although he said he took exception to some of the points. McPherson also said the position of humaneness coordinator was his responsibility, instead of hiring someone else for the position as indicated in the recommended 1971-72 budget. Some of his other major points during the discussion were "more involvement by students, parents and teachers in determining budget and curriculum;" "making my role as superintendent accountable to the Board of Education;" "offering more alternatives and variety in education;" and "combating institutional sexism as well as racism." The new superintendent plans to outline by the end of the summer a set of goals for the Ann Arbor Schools and he hopes to involve the total community in accomplishing them. "I don't want to be judged by my words . . . judge us by our actions and our behavior. If you give us this opportunity we should have an exciting year," McPherson concluded. Also present at last night's meeting were the three administrators recommended by McPherson to assume positions here with him - Frederick Holliday, deputy superintendent; Phillip Mcllnay, deputy superintendent for planning; and Mildred Bautista, assistant to the superintendent.