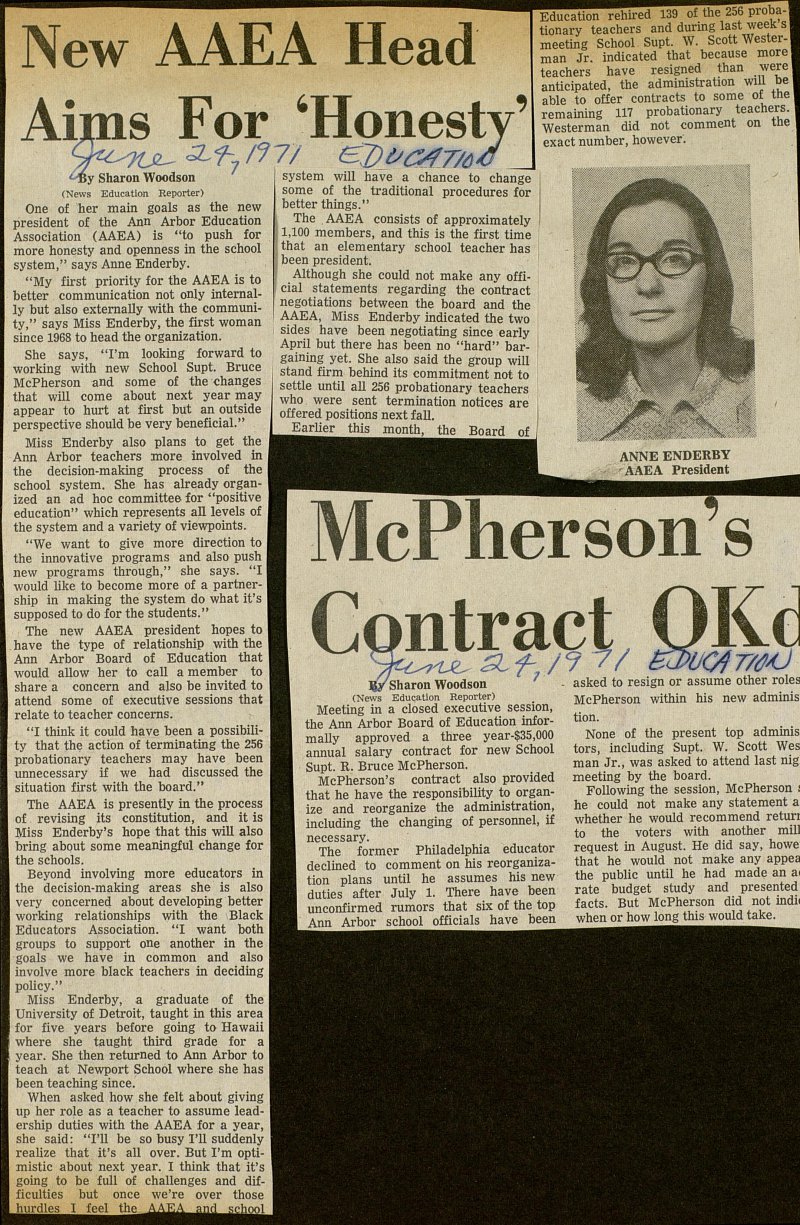 One of her main goals as the new president of the Ann Arbor Education Association (AAEA) is "to push for more honesty and openness in the school system," says Anne Enderby. "My first priority for the AAEA is to better communication not only internally but also externally with the community," says Miss Enderby, the first woman since 1968 to head the organization. She says, "I'm looking forward to working with new School Supt. Bruce McPherson and some of the changes that will come about next year may appear to hurt at first but an outside perspective should be very beneficial." Miss Enderby also plans to get the Ann Arbor teachers more involved in I the decision-making process of the school system. She has already organized an ad hoc committee for "positive education" which represents all levels of the system and a variety of viewpoints. "We want to give more direction to the innovative programs and also push new programs through," she says. "I would like to become more of a partnership in making the system do what it's supposed to do for the students." The new AAEA president hopes to have the type of relationship with the Ann Arbor Board of Education that would allow her to call a member to share a concern and also be invited to attend some of executive sessions that relate to teacher concerns. "I think it could have been a possibility that the action of terminating the 256 probationary teachers may have been unnecessary if we had discussed the situation first with the board." The AAEA is presently in the process of revising its constitution, and it is Miss Enderby's hope that this will also bring about some meaningful change for the schools. Beyond involving more educators in the decision-making areas she is also very concerned about developing better working relationships with the Black Educators Association. "I want both groups to support one another in the goals we have in common and also involve more black teachers in deciding policy." Miss Enderby, a graduate of the University of Detroit, taught in this area for five years before going to Hawaii where she taught third grade for a year. She then returned to Ann Arbor to teach at Newport School where she has been teaching since. When asked how she felt about giving up her role as a teacher to assume leadership duties with the AAEA for a year, she said: "l'll be so busy I'll suddenly realize that it's all over. But I'm optimistic about next year. I think that it's going to be full of challenges and difficulties but once we're over those I hurdles I feel the AAEA_and school system will have a chance to change some of the traditional procedures for better things." The AAEA consists of approximately , 1,100 members, and this is the first time i that an elementary school teacher has been president. Although she could not make any official statements regarding the contract negotiations between the board and the AAEA, Miss Enderby indicated the two sides have been negotiating since early April but there has been no "hard" bargaining yet. She also said the group will stand firm behind its commitment not to settle until all 256 probationary teachers who were sent termination notices are offered positions next fall. Earlier this month, the Board of Education rehired 139 of the 256 probationary teachers and during last week s meeting School . Supt. W. Scott Westerman Jr. indicated that because more teachers have resigned than were anticipated, the administration will be able to offer contracts to some of the remaining 117 probationary teachers. Westerman did not comment on the exact number, however.