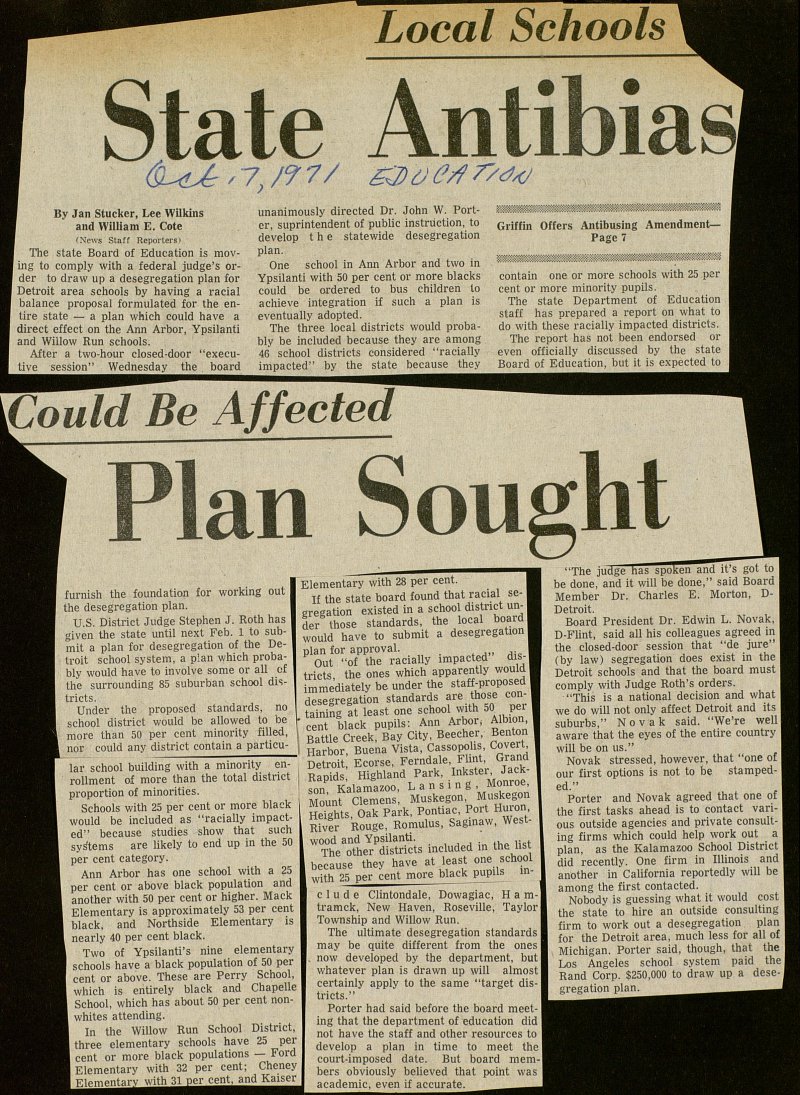 I The state Board of Education is movLng to comply with a federal judge's orI der to draw up a desegregation plan for Detroit área schools by having a racial balance proposal formulated for the entire state - a plan which could have a direct effect on the Ann Arbor, Ypsilanti and Willow Run schools. Af ter a two-hour closed-door "executive session" Wednesday the board unanimously directed Dr. John W. Porter, suprintendent of public instruction, to develop the statewide desegregation plan. One school in Ann Arbor and tvvo in Ypsilanti with 50 per cent or more blacks could be ordered to bus children to achieve integration if such a plan is eventually adopted. The three local districts would probably be included because they are among 46 school districts considered "racially impacted" by the state because they Griffin Offers Antibusing Amendment- Page 7 mmmmmmmmm:iim:mmmmmmmmmmm contain one or more schools with 25 par cent or more minority pupils. The state Department of Education staff has prepared a report on what to do with these racially impacted districts. The report has not been endorsed or even officially discussed by the state Board of Education, but it is expected to furnish the foundation for working out the desegregation plan. U.S. District Judge Stephen J. Roth has given the state until next Feb. 1 to submit a plan for desegregation of the Detroit school system, a plan which probably would have to involve some or all of the surrounding 85 suburban school districts. Under the proposed standards, no school district would be allowed to be i more than 50 per cent minority filled, l nor could any district contain a particular school building with a minority enrollment of more than the total district proportion of minorities. Schools with 25 per cent or more black i would be included as "racially impacted" because studies show that such syátems are likely to end up in the 50 I per cent category. Ann Arbor has one school with a 25 per cent or above black population and another with 50 per cent or higher. Mack Elementary is approximately 53 per cent I black, and Northside Elementary is I nearly 40 per cent black. Two of Ypsilanti's nine elementary I schools have a black population of 50 per I cent or above. These are Perry School, I which is enürely black and Chapelle I School, which has about 50 per cent nonI whites attending. I In the Willow Run School District, I three elementary schools have 25 per I cent or more black populations - Ford ■ Elementary with 32 per cent; Cheney ■ m Qr,torv with 31 ner cent, and Kaiser Elementary with 28 per cent. If the state board found that racial ■ gregation existed in a school district ■ der Ihose standards, the local board ■ would have to submit a de.scgregatu.nj P Out"ofP the racially impacted" dis-B tricts, the ones which apparently would ■ mmediately be under the staö-proposed ■ desegregation standards are those ■ taining at least one school with 50 per ■ ' cent black pupils: Ann Arbor, Album I Battle Creek, Bay City, Beecher, Benton I Harbor, Buena Vista, Cassopolis, Covert I Se roit Ecorse, Ferndale F lint, Grand 1 Rapids, Highland Park, Ekster I son Kalamazoo, Lansing, Monroe, I Moünt Clemens, Muskegon, Muskegon I HeTghts, Oak Park, Pontiac, Port Huron S'ver Rouge, Romulus, Saginaw, Westwood and Ypsilanti. ■ I The other districts included in the Hst because they have at least one school with 25 per cent more black_pupils inelude Clintondale, Dowagiac, Hamtramck, New Haven, Roseville, Taylor Township and Willow Run. The ultímate desegregation standards may be quite different from the ones . now developed by the department, but whatever plan is drawn up will almost certainly apply to the same "target districts." Porter had said before the board meeting that the department of education did not have the staff and other resources to develop a plan in time to meet the court-imposed date. But board mem-I bers obviously believed that point was academie, even if accurate. "The judge has spoken and ït's got to I be done, and it will be done," said Board I Member Dr. Charles E. Morton, I Detroit. Board President Dr. Edwin L. Novak, D-Flint, said all his colleagues agreed in ■ the closed-door session that "de jure" (by law) segregation does exist in the ■ Detroit schools and that the board must ■ comply with Judge Roth's orders. "This is a national decisión and what I we do will not only affect Detroit and its I suburbs," Novak said. "We're wellB aware that the eyes of the entire country ■ will be on us." I Novak stressed, however, that "one of ■ our first options is npt to be 1 ed." I Porter and Novak agreed that one of ■ the first tasks ahead is to contact ■ ous outside agencies and private ■ ing firms which could help work out a ■ plan, as the Kalamazoo School District ■ did recently. One firm in Illinois and ■ another in California reportedly will be I among the first contacted. Nobody is guessing what it would cost I the state to hire an outside consulting I firm to work out a desegregation plan ■ for the Detroit área, much less for all of I Michigan. Porter said, though, that the I Los Angeles school system paid thei Rand Corp. $250,000 to draw up a dese-B gregation plan. ____jjJ