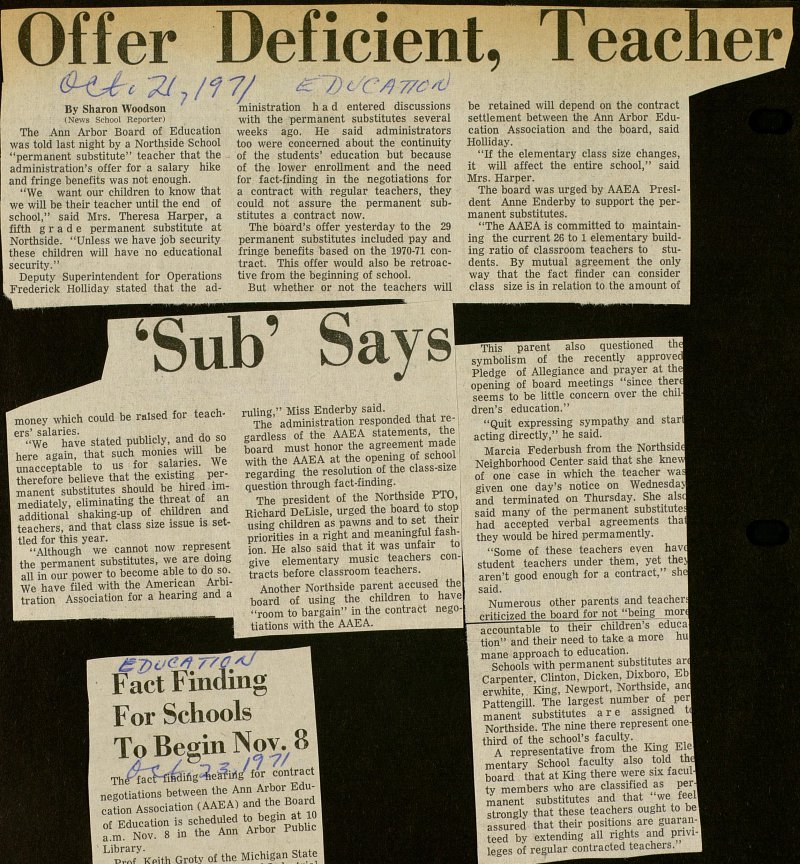 The Arm Arbor Board of Education was told last night by a Northside School "permanent substitute" teacher that the administration's offer for a salary hike and fringe benefits was not enough. "We want our children to know that we will be their teacher until the end of school," said Mrs. Theresa Harper, a fifth grade permanent substitute at Northside. "Unless we have job security these children will have no educational security." Deputy Superintendent for Operations Frederick Holliday stated that the ministration had entered discussions with the permanent substitutes several weeks ago. He said administrators too were concerned about the continuity of the students' education but because of the lower enrollment and the need for fact-finding in the negotiations for a contract with regular teachers, they could not assure the permanent substitutes a contract now. The board's offer yesterday to the 29 permanent substitutes included pay and fringe benefits based on the 1970-71 contract. This offer would also be retroactive from the beginning of school. But whether or not the teachers will be retained will depend on the contract settlement between the Ann Arbor Education Association and the board, said Holliday. "If the elementary class size changes, it will affect the entire school," said Mrs. Harper. The board was urged by AAEA President Anne Enderby to support the permanent substitutes. "The AAEA is committed to maintaining the current 26 to 1 elementary building ratio of classroom teachers to students. By mutual agreement the only way that the fact finder can consider class size is in relation to the amount of money which could be raised for teacher"We have stated publicly, and do so here again, that such monies will be unacceptable to us for salaries. We therefore believe that the existing permanent substitutes should be hired immediately, eliminating the threat of an additional shaking-up of chüdren and teachers, and that class size issue is settled for this year. "Although we cannot now represent the permanent substitutes, we are doing I all in our power to become able to do so. I We have filed with the American ArbiI tration Association for a hearing and a ruling," Miss Enderby said. The administration responded that regardless of the AAEA statements, the board must honor the agreement made with the AAEA at the opening of school regarding the resolution of the class-size question through fact-finding. The president of the Northside PTO, Kichard DeLisle, urged the board to stop using children as pawns and to set ttieir priorities in a right and meaningful fashion He also said that it was unfair to give elementary music teachers contracts before classroom teachers. Another Northside parent accused the board of using the children to have "room to bargain" in the contract negotiations with the AAEA. This parent also questioned the symbolism of the recently approvedl Pledge of Allegiance and prayer at the opening of board meetings "since there seems to be little concern over the chil-i dren's education." "Quit expressing sympathy and start acting directly," he said. Marcia Federbush from the NorthsidJ Neighborhood Center said that she knew of one case in which the teacher was given one day's notice on Wednesday and terminated on Thursday. She also said many of the permanent substitutes had accepted verbal agreements that they would be hired permanently. "Some of these teachers even have student teachers under them, yet they aren't good enough for a contract," she said. Numerous other parents and teachers criticized the board for not "being more accountable to their children's education" and their need to take a more humane approach to education. I Schools with permanent substitutes ar Carpenter, Clinton, Dicken, Dixboro, Eberwhite, King, Newport, Northside, an Pattengill. The largest number of permanent substitutes are assigned to Northside. The nine there represent one-third of the school's faculty. A representative from the King Elementary School faculty also told the board that at King there were faculty members who are classified as permanent substitutes and that "we fcel strongly that these teachers ought to be assured that their positions are guaranteed by extending all rights and privileges of regular contracted teachers.