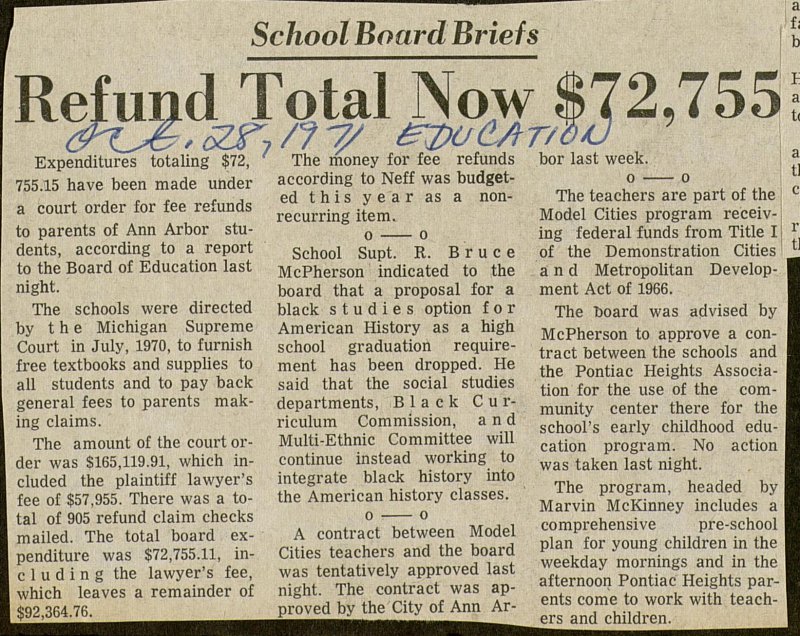 Expenditures totaling $72, 755.15 have been made under a court order for fee refunds to parents of Ann Arbor students, according to a report to the Board of Education last night. The schools were directed by the Michigan Supreme Court in July, 1970, to furnish free textbooks and supplies to all students and to pay back general fees to parents making claims. The amount of the court order was $165,119.91, which included the plaintiff lawyer's fee of $57,955. There was a total of 905 refund claim checks mailed. The total board expenditure was $72,755.11, inc 1 u d i n g the lawyer's fee, which leaves a remainder of $92,364.76. The money for fee refunds according to Neff was budgeted this year as a nonrecurring item. o o School Supt. R. Bruce McPherson indicated to the board that a proposal for a black studies option for American History as a high school graduation requirement has been dropped. He said that the social studies departments, Black Curriculum Commission, and Multi-Ethnic Committee will continue instead working to intégrate black history into the American history classes, o o A contract between Model Cities teachers and the board was tentatively approved last night. The contract was approved by the City of Ann bor last week. o o The teachers are part of the Model Cities program receiving federal funds from Title I of the Demonstration Cities and Metropolitan Development Act of 1966. The T)oard was advised by McPherson to approve a contract between the schools and the Pontiac Heights Association for the use of the community center there for the school's early childhood education program. No action was taken last night. The program, headed by Marvin McKinney includes a comprehensive pre-school plan for young children in the weekday mornings and in the afternoon Pontiac Heights 1 ents come to work with teachers and children.