Brief Items From School Board 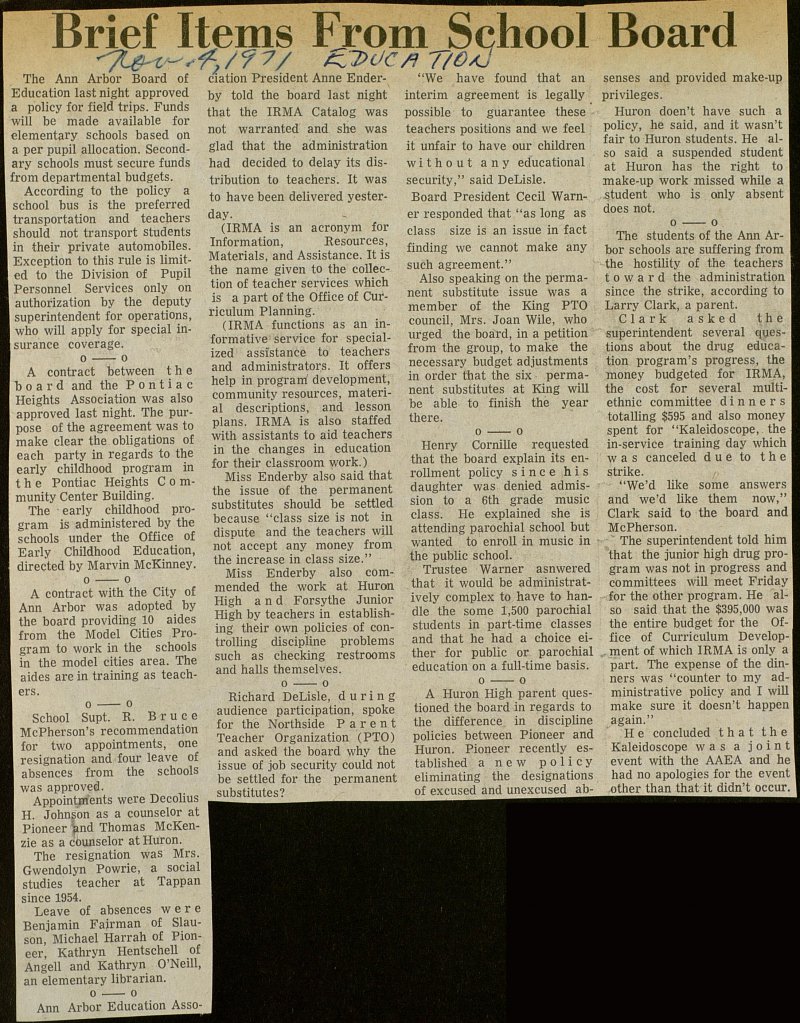 The Ann Arbor Board of Education last night approved a policy for field trips. Funds will be made available for elementary schools based on a per pupil allocation. Secondary schools must secure funds from departmental budgets. According to the policy a school bus is the preferred transportation and teachers should not transport students in their private automobiles. Exception to this rule is limiti ed to the División of Pupil Personnel Services only on authorization by the deputy superintendent for operations, who will apply for special inI surance coverage. o o A contract between the board and the P o n t i a c Heights Association was also approved last night. The purpose of the agreement was to make clear the obligations of each party in regards to the early childhood program in the Pontiac Heights C o mmunity Center Building. The early childhood program is administered by the schools under the Office of Early Childhood Education, directed bv Marvin McKinney. o o A contract with the City of Ann Arbor was adopted by the board providing 10 aides from the Model Cities Program to work in the schools in the model cities area. The aides are in training as teachers. o o School Supt. R. Bruce McPherson's recommendation for two appointments, one resignaüon and four leave of absences from the schools was approved. Appointments were Decolius H. Johnson as a counselor at Pioneer nd Thomas McKenzie as a counselor at Huron. The resignation was Mrs. Gwendolyn Powrie, a social studies teacher at Tappan since 1954. Leave of absences were Benjamin Fajrman of Slauson, Michael Harrah of Pioneer, Kathryn Hentschell of Angelí and Kathryn O'Neill, an elementary librarían, o o Ann Arbor Education ciation President Anne Enderby told the board last night that the IRMA Catalog was ; not warranted and she was glad that the administration had decided to delay its distribution to teachers. It was to have been delivered yesterday. (IRMA is an acronym for Information, Resources, Materials, and Assistance. It is the name given to the collection of teacher services which is a part of the Office of Curriculum Planning. (IRMA functions as an informative service for specialized assistance to teachers and administrators. It offers help in prograirí development, community resources, material descriptions, and lesson plans. IRMA is also staffed with assistants to aid teachers in the changes in education for their classroom work.) Miss Enderby also said that the issue of the permanent substitutes should be settled because "class size is not in dispute and the teachers will not accept any money from the increase in class size." Miss Enderby also commended the work at Huron High and Forsythe Junior High by teachers in establishing their own policies of controlling discipline problems such as checking restrooms and halls themselves. o o Richard DeLisle, d u r i n g audience participation, spoke for the Northside P a r e n t Teacher Organization (PTO) and asked the board why the issue of job security could not be settled for the permanent substitutes? "We have found that an interim agreement is legally possible to guarantee these teachers positions and we feel it unfair to have our children without any educational security," said DeLisle. Board President Cecil Warner responded that "as long as class size is an issue in fact finding we cannot make any such agreement." Also speaking on the permanent substitute issue was a member of the King PTO council, Mrs. Joan Wile, who urged the board, in a petition from the group, to make the necessary budget adjustments in order that the six permanent substitutes at King will be able to finish the year there. o o Henry Cornille requested that the board explain its enrollment policy since his daughter was denied admission to a 6th grade music class. He explained she is attending parochial school but wanted to enroll in music in the public school. Trustee Warner asnwered that it would be administratively complex to have to handle the some 1,500 parochial students in part-time classes and that he had a choice either for public or parochial education on a full-time basis. o o A Hurón High parent questioned the board in regards to the difference in discipline policies between Pioneer and Huron. Pioneer recently established a new policy eliminating the designations of excused and unexcused ab " senses and provided make-up I privileges. Huron doen't have such a I policy, he said, and it wasn't I fair to Huron students. He I so said a suspended student I at Huron has the right to I make-up work missed while a I student who is only absent I does not. o o The students of the Ann Arbor schools are suffering from the hostility of the teachers t o w a r d the administration since the strike, according to Larry Clark, a parent. Clark asked the superintendent several questions about the drug education program's progress, the money budgeted for IRMA, the cost for several multiethnic committee d i n n e r s totalling $595 and also money spent for "Kaleidoscope, the in-service training day which was canceled d u e to the strike. "We'd like some answers and we'd like them now," Clark said to the board and McPherson. ' The superintendent told him that the junior high drug program was not in progress and committees will meet Friday for the other program. He also said that the $395,000 was the entire budget for the Office of Curriculum Develop,. ment of which IRMA is only a part. The expense of the dinners was "counter to my administrative policy and I will make sure it doesn't happen again." H e concluded that the Kaleidoscope was a joint event with the AAEA and he had no apologies for the event other than that it didn't occur.