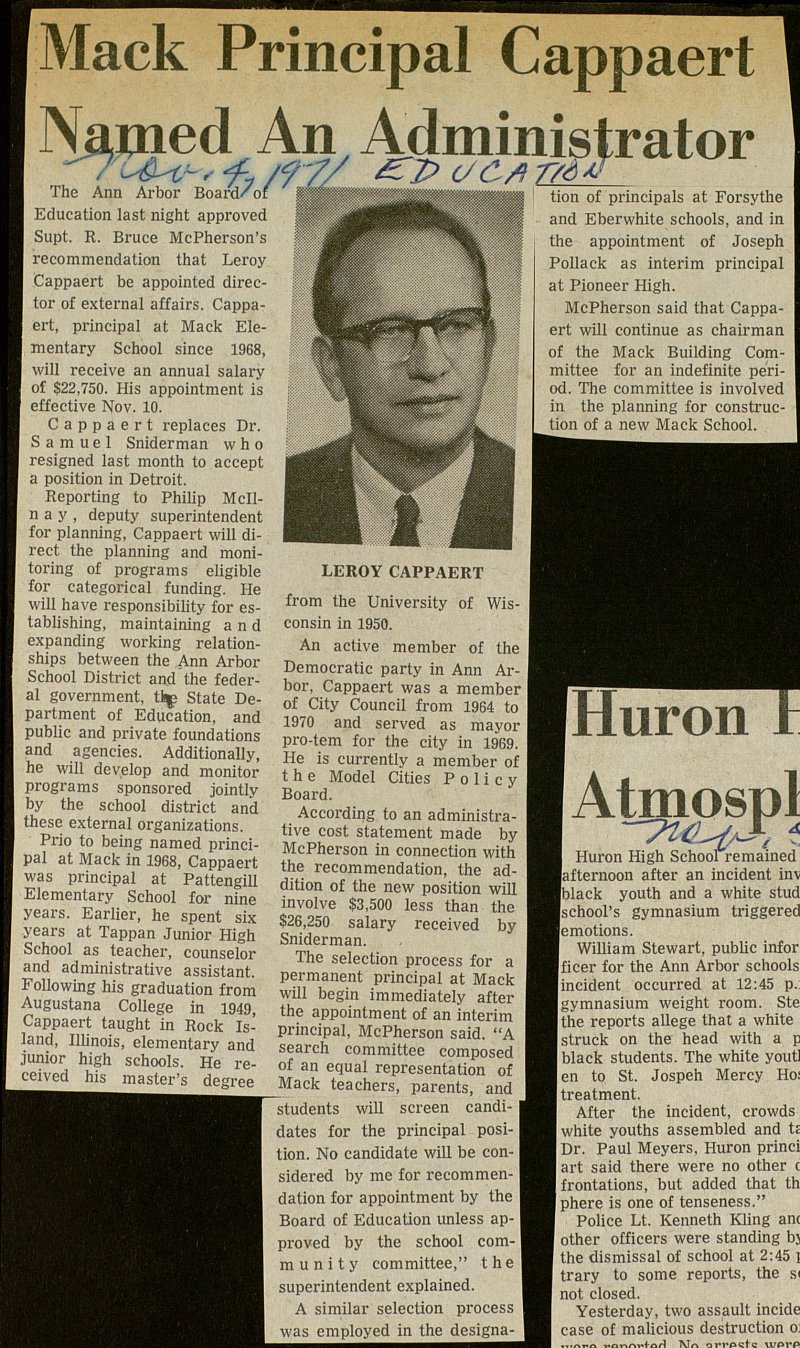 The Ann Arbor Board of Education last night approved Supt. R. Bruce McPherson's recommendation that Leroy Cappaert be appointed director of external affairs. Cappaert, principal at Mack Elementary School since 1968, will receive an annual salary of $22,750. His appointment is effective Nov. 10. Cappaert replaces Dr. Samuel Sniderman w h o resigned last month to accept a position in Detroit. Reporting to Philip Mcllnay , deputy superintendent for planning, Cappaert will direct the planning and monitoring of programs eligible for categorical funding. He will have responsibility for establishing, maintaining and expanding working ships between the Ann Arbor School District and "the federal government, the State Department of Education, and public and private foundations and agencies. Additionally, I he will develop and monitor I programs sponsored jointly I by the school district and I these external organizations. Prior to being named principal at Mack in 1968, Cappaert was principal at Pattengill Elementary School for nine years. Earlier, he spent six years at Tappan Junior High I School as teacher, counselor and administrative assistant. Following his graduation from Augustana College in 1949, Cappaert taught in Rock Island, Illinois, elementary and junior high schools. He received his master's degree from the University of Wisconsin in 1950. An active member of the Democratie party in Ann Arbor, Cappaert was a member of City Council from 1964 to 1970 and served as mayor pro-tem for the city in 1969. He is currently a member of the Model Cities P o 1 i c y Board. According to an administrative cost statement made by McPherson in connection with the recommendation, the addition of the new position will involve $3,500 less than the $26,250 salary received by Sniderman. The selection process for a permanent principal at Mack i will begin immediately after the appointment of an interim Principal, McPherson said. "A search committee composed of an equal representation of Mack teachers, parents, and students will screen candidates for the principal position. No candidate will be considered by me for recommendation for appointment by the Board of Education unless approved by the school comm u n i t y committee," the superintendent explained. A similar selection process was employed in the selection of principáls at Forsythe and Eberwhite schools, and in the appointment of Joseph Pollack as interim principal at Pioneer High. McPherson said that Cappaert will continue as chairman of the Mack Building Committee for an indefinite period. The committee is involved in the planning for construction of a new Mack School.