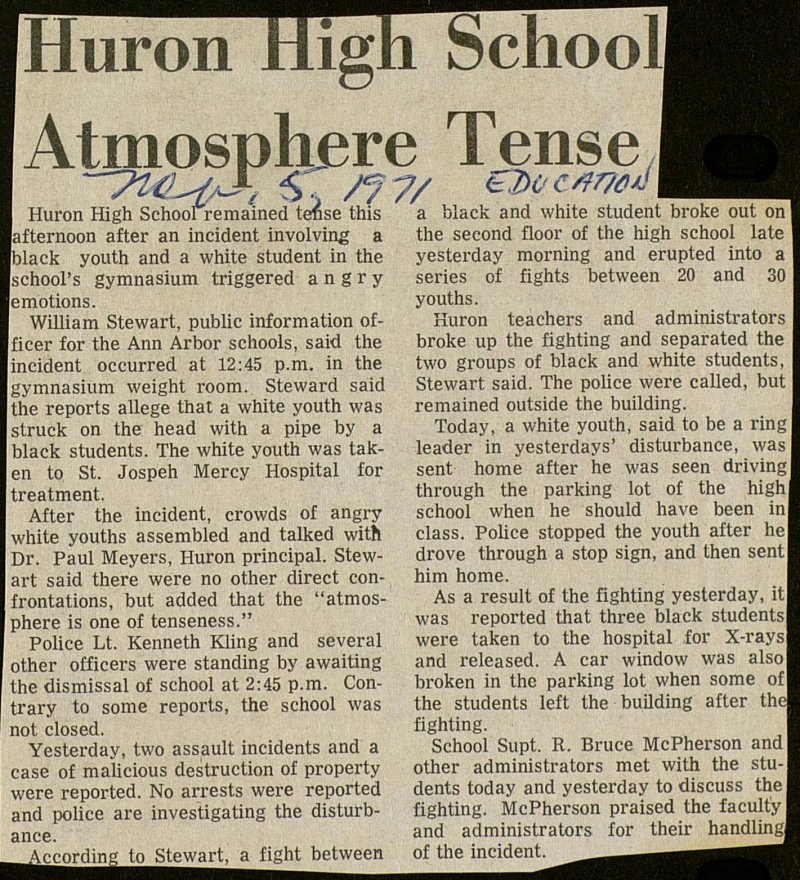 Hurón High School remained tense this afternoon after an incident involving a black youth and a white student in the school's gymnasium triggered angry emotions. William Stewart, public information officer for the Ann Arbor schools, said the incident occurred at 12:45 p.m. in the gymnasium weight room. Steward said the reports allege that a white youth was struck on the head with a pipe by a black students. The white youth was taken to St. Joseph Mercy Hospital for treatment. After the incident, crowds of angry white youths assembled and talked with Dr. Paul Meyers, Hurón principal. Stewart said there were no other direct confrontations, but added that the "atmosphere is one of tenseness." Pólice Lt. Kenneth Kling and several other officers were standing by awaiting the dismissal of school at 2:45 p.m. Contrary to some reports, the school was not closed. Yesterday, two assault incidents and a case of malicious destruction of property were reported. No arrests were reported and pólice are investigating the disturbance. _According to Stewart, a fight between a black and white student broke out on the second floor of the high school late yesterday morning and erupted into a series of fights between 20 and 30 youths. Huron teachers and administrators broke up the fighting and separated the two groups of black and white students, Stewart said. The pólice were called, but remained outside the building. Today, a white youth, said to be a ring leader in yesterdays' disturbance, was sent home after he was seen driving through the parking lot of the high school when he should have been ia class. Pólice stopped the youth after he drove through a stop sign, and then sent him home. As a result of the fighting yesterday, it was reported that three black students were taken to the hospital for X-rays and released. A car window was also broken in the parking lot when some of the students left the building after thd fighting. School Supt. R. Bruce McPherson and other administrators met with the students today and yesterday to discuss the fighting. McPherson praised the faculty and administrators for their handlingj of the incident.