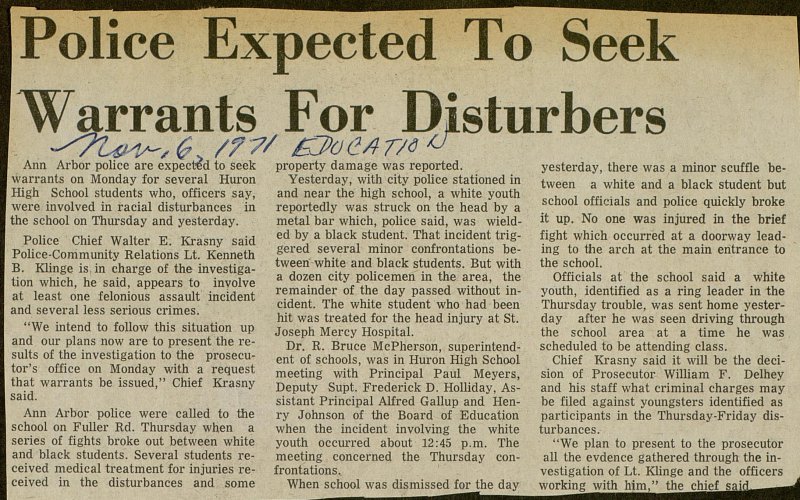 Ann Arbor pólice are expected to seek warrants on Monday for several Hurón High School students who, officers say, were involved in racial disturbances in the school on Thursday and yesterday. Pólice Chief Walter E. Krasny said Police-Community Relations Lt. Kenneth B. Klinge is in charge of the investigation which, he said, appears to inyolve at least one felonious assault incident and several less serious crimes. "We intend to follow this situation up and our plans now are to present the results of the investigation to the prosecutor's office on Monday with a request that warrants be issued," Chief Krasny said. Ann Arbor pólice were called to the school on Fuller Rd. Thursday when a series of fights broke out between white and black students. Several students received medical treatment for injuries received in the disturbances and some fí[ -- jr ' ' f f property damage was reported. Yesterday, with city pólice stationed in and near the high school, a white youth reportedly was struck on the head by a metal bar which, pólice said, was wielded by a black student. That incident triggered several minor confrontations between white and black students. But with a dozen city policemen in the area, the remainder of the day passed without incident. The white student who had been hit was treated for the head injury at St. Joseph Mercy Hospital. Dr. R. Bruce McPherson, superintendent of schools, was in Huron High School meeting with Principal Paul Meyers, Deputy Supt. Frederick D. Holliday, Assistant Principal Alfred Gallup and Henry Johnson of the Board of Education when the incident involving the white youth occurred about 12:45 p.m. The meeting concerned the Thursday confrontations. When school was dismissed for the day yesterday, there was a minor scuffle between a white and a black student but school officials and pólice quickly broke it up. No one was injured in the brief fight which occurred at a doorway leading to the arch at the main entrance to the school. Officials at the school said a white youth, identified as a ring leader in the Thursday trouble, was sent home yesterday after he was seen driving through the school area at a time he was scheduled to be attending class. Chief Krasny said it will be the decisión of Prosecutor William F. Delhey and his staff what criminal charges may be filed against youngsters identified as participants in the Thursday-Friday disturbances. "We plan to present to the prosecutor all the evdence gathered through the investigation of Lt. Klinge and the officers working with him," the chief "vi