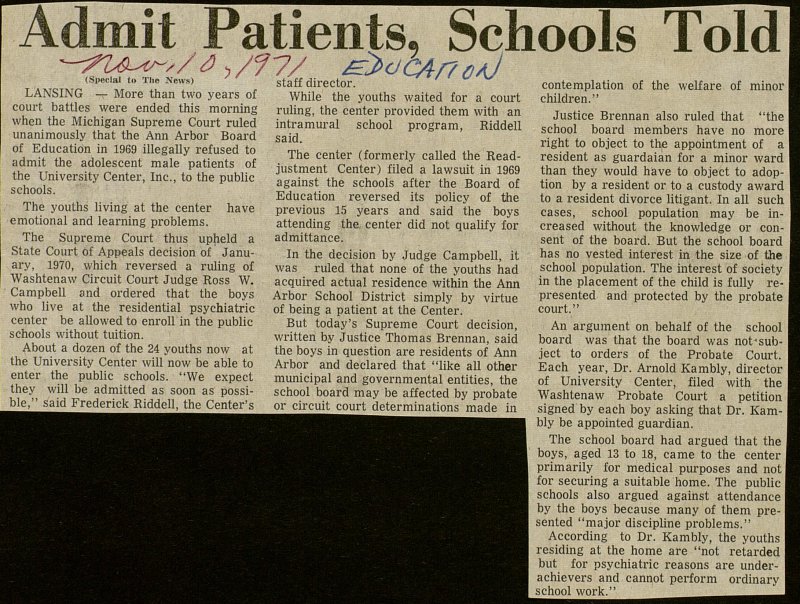 LANSING - More than two years of court battles were ended this morning when the Michigan Supreme Court ruled unanimously that the Ann Arbor Board of Education in 1969 illegally refused to admit the adolescent male patients of the University Center, Inc., to the public schools. The youths living at the center have emotional and learning problems. The Supreme Court thus upheld a State Court of Appeals decisión of January, 1970, which reversed a ruling of Washtenaw Circuit Court Judge Ross W. Campbell and ordered that the boys who live at the residential psychiatric center be allowed to enroll in the public schools without tuition. About a dozen of the 24 youths now at the University Center will now be able to enter the public schools. "We expect they will be admitted as soon as possible," said Frederick Riddell, the Center's staff director. While the youths waited for a court ruling, the center provided them with an intramural school program, Riddell said. The center (formerly called the Readjustment Center) filed a lawsuit in 1969 against the schools after the Board of Education reversed its policy of the previous 15 years and said the boys attending the center did not qualify for admittance. In the decisión by Judge Campbell, it was ruled that none of the youths had acquired actual residence within the Ann Arbor School District simply by virtue of being a patiënt at the Center. But today's Supreme Court decisión, written by Justice Thomas Brennan, said the boys in question are residents of Ann Arbor and declared that "like all other municipal and governmental entities, the school board may be affected by probate or circuit court determinations made in contemplation of the welfare of minor children." Justice Brennan also ruled that "the school board members have no more right to object to the appointment of a resident as guardian for a minor ward than they would have to object to adoption by a resident or to a custody award to a resident divorce litigant. In all such cases, school population may be increased without the knowledge or consent of the board. But the school board has no vested interest in the size of the school population. The interest of society in the placement of the child is fully represented and protected by the probate court." An argument on behalf of the school board was that the board was not' subject to orders of the Probate Court. Each year, Dr. Arnold Kambly, director of University Center, filed with the Washtenaw Probate Court a petition signed by each boy asking that Dr. Kambly be appointed guardián. The school board had argued that the boys, aged 13 to 18, came to the center primarily for medical purposes and not for securing a suitable home. The public schools also argued against attendance by the boys because many of them presented "major discipline problems." According to Dr. Kambly, the youths residing at the home are "not retarded but for psychiatric reasons are underachievers and cannot perform ordinary school work."