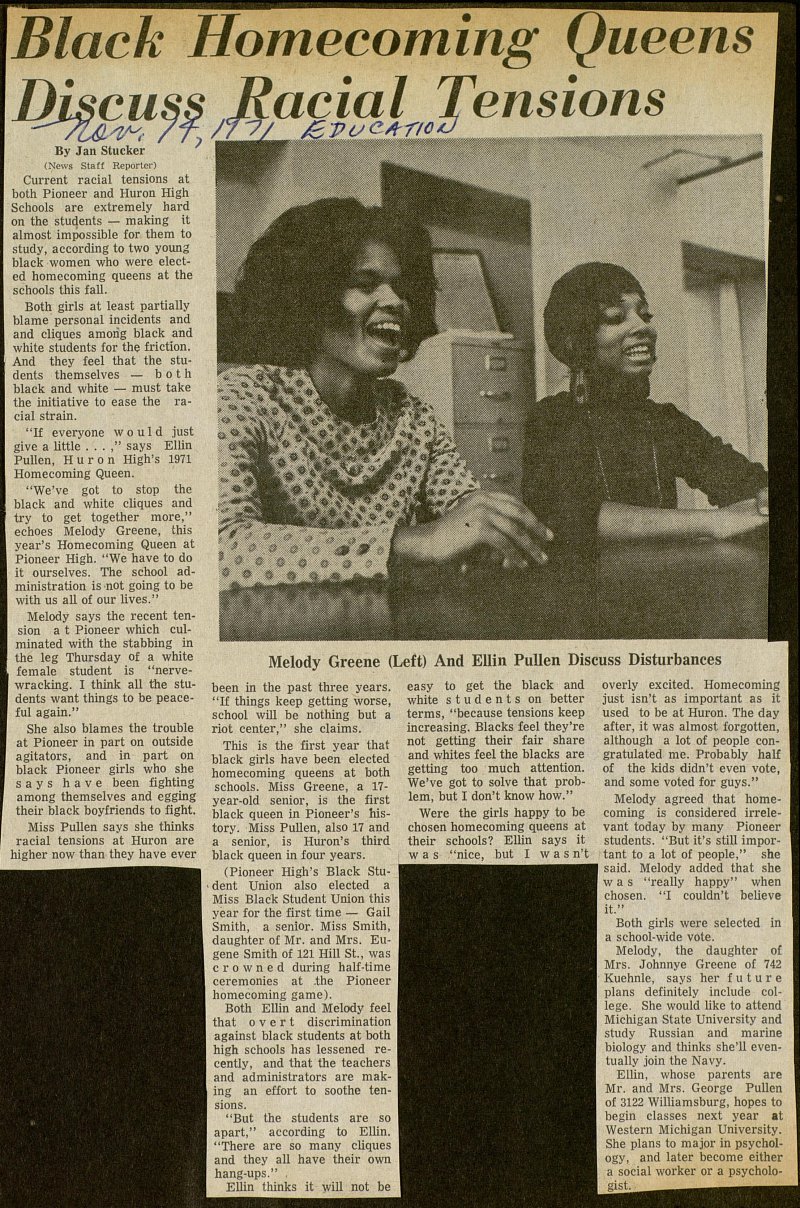 Current racial tensions at both Pioneer and Huron High Schools are extremely hard on the students - making it almost impossible for them to study, according to two young black women who were elected homecoming queens at the schools this fall. Both girls at least partially blame personal incidents and and cliques amorig black and white students for the friction. And they feel that the students themselves - both black and white - must take the initiative to ease the racial strain. "If everyone would just give a little . . . ," says Ellin Pullen, Huron High's 1971 Homecoming Queen. "We've got to stop the black and white cliques and try to get together more," echoes Melody Greene, this year's Homecoming Queen at Pioneer High. "We have to do it ourselves. The school administration is not going to be with us all of our lives." Melody says the recent tensión a t Pioneer which culminated with the stabbing in the leg Thursday of a white . female student is "nervewracking. I think all the stuI dents want things to be peaceful again." She also blames the trouble at Pioneer in part on outside agitators, and in part on black Pioneer girls who she says have been fighting among themselves and egging their black boyfriends to fight. Miss Pullen says she thinks racial tensions at Huron are higher now than they have ever been in the past three years. "If things keep getting worse, school will be nothing but a riot center," she claims. This is the first year that black girls have been elected homecoming queens at both schools. Miss Greene, a 17year-old senior, is the first black queen in Pioneer's history. Miss Pullen, also 17 and a senior, is Huron's third black queen in four years. (Pioneer High's Black Stu'dent Union also elected a Miss Black Student Union this year for the first time - Gail Smith, a senior. Miss Smith, daughter of Mr. and Mrs. Eugene Smith of 121 Hill St., was crowned during half-time ceremonies at .the Pioneer homecoming game). Both Ellin and Melody feel that o v e r t discrimination against black students at both high schools has lessened recently, and that the teachers and administrators are makj ing an effort to soothe tensions. "But the students are so apart," according to Ellin. "There are so many cliques and they all have their own hang-ups." . Ellin thinks it will not be easy to get the black and white students on better terms, "because tensions keep increasing. Blacks feel they're not getting their fair share and whites feel the blacks are getting too much attention. We've got to solve that problem, but I don't know how." Were the girls happy to be chosen homecoming queens at their schools? Ellin says it was "nice, but I w a s n't overly excited. Homecoming I just isn't as important as it I used to be at Huron. The day I after, it was almost forgotten, I although a lot of people I gratulated me. Probably half I of the kids didn't even vote, I and some voted for guys." Melody agreed that I coming is considered I vant today by many Pioneer I students. "But it's still 1 tant to a lot of people," she said. Melody added that she was "really happy" when chosen. "I couldn't believe it." Both girls were selected in a school-wide vote. Melody, the daughter of Mrs. Johnnye Greene of 742 Kuehnle, says her future plans definitely include college. She would like to attend Michigan State University and study Russian and marine biology and thinks she'll eventually join the Navy. Elün, whose parents are Mr. and Mrs. George Pullen of 3122 Williamsburg, hopes to begin classes next year at Western Michigan University. She plans to major in psychology, and later become either a social worker or a psychologist. ___nBH