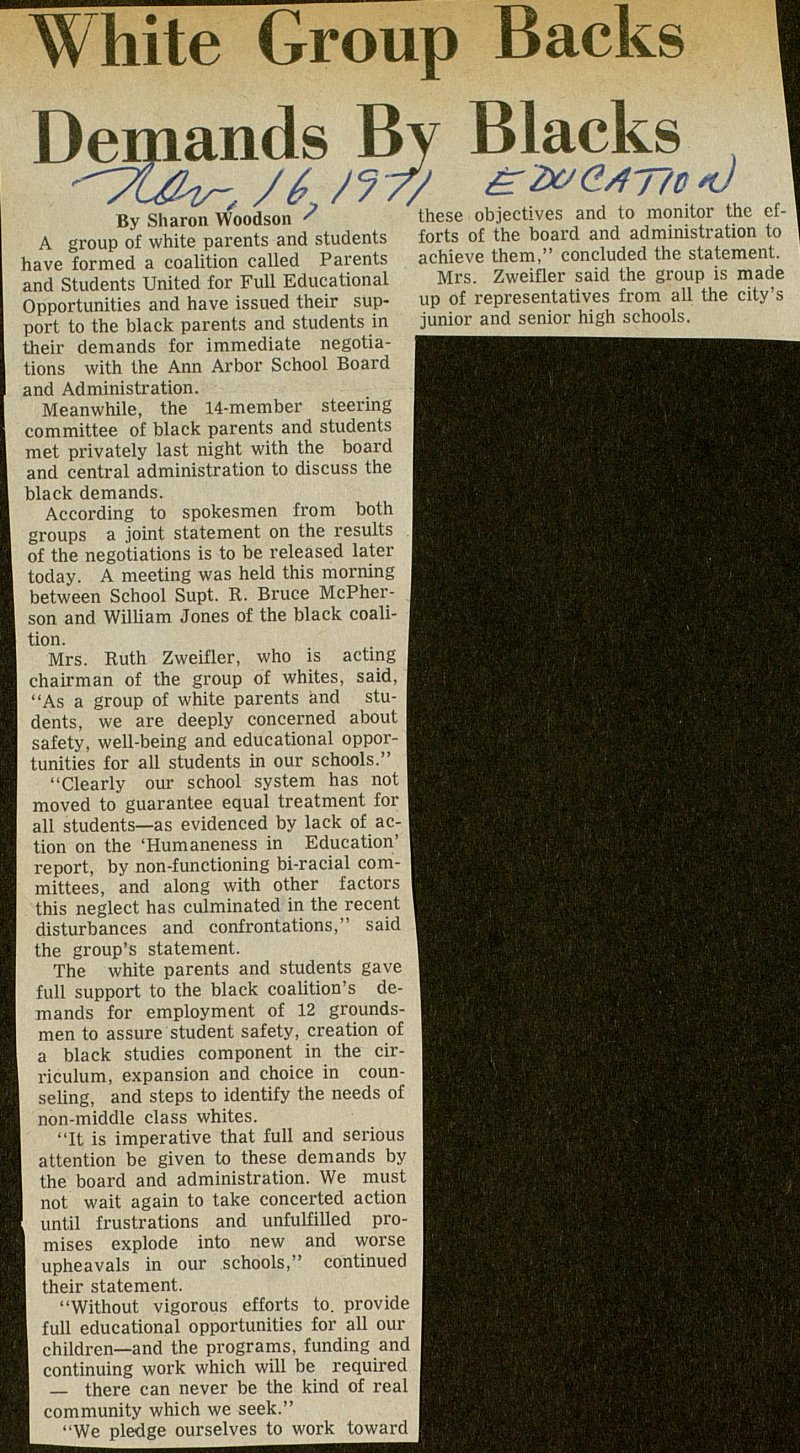 A group of white parents and students have formed a coalition called Parents and Students United for Full Educational Opportunities and have issued their support to the black parents and students in their demands for immediate negotiations with the Ann Arbor School Board and Administration. Meanwhile, the 14-member steering committee of black parents and students met privately last night with the board and central administration to discuss the black demands. According to spokesmen from both groups a joint statement on the results of the negotiations is to be released later today. A meeting was held this morning between School Supt. R. Bruce McPherson and William Jones of the black coalition. Mrs. Ruth Zweifler, who is acting I chairman of the group of whites, said, I "As a group of white parents and I dents, we are deeply concerned about I safety, well-being and educational I tunities for all students in our schools." "Clearly our school system has not I moved to guarantee equal treatment for I all students- as evidenced by lack of 1 tion on the 'Humaneness in Education' I report, by non-functioning bi-racial I mittees, and along with other factors I this neglect has culminated in the recent disturbances and confrontations," said the group's statement. The white parents and students gave full support to the black coalition's demands for employment of 12 groundsmen to assure student safety, creation of a black studies component in the cirriculum, expansión and choice in counseling, and steps to identify the needs of non-middle class whites. "It is imperative that full and serious attention be given to these demands by the board and administration. We must not wait again to take concerted action until frustrations and unfulfilled promises explode into new and worse upheavals in our schools," continued their statement. "Without vigorous efforts to. provide full educational opportunities for all our I children- and the programs, funding and continuing work which will be required - there can never be the kind of real community which we seek." "We pledge ourselves to work toward these objectives and to monitor the efforts of the board and administration to achieve them," concluded the statement. Mrs. Zweifler said the group is made up of representatives from all the city's junior and senior high schools.