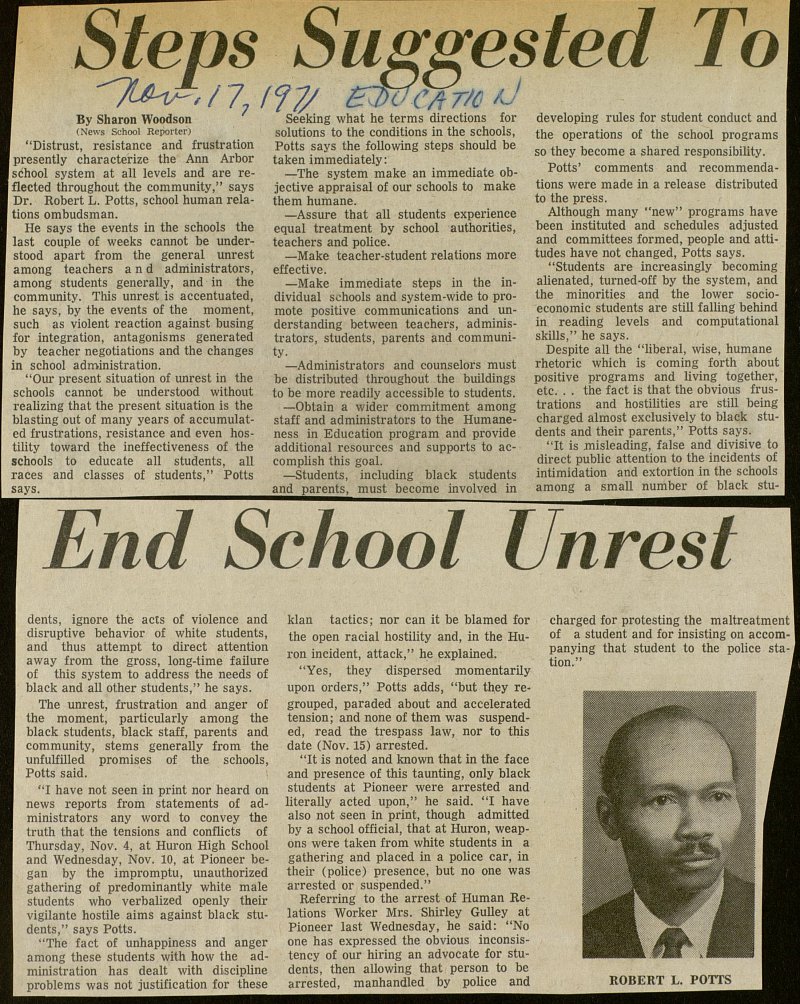 I "Distrust, resistance and frustration presently characterize the Arm Arbor school system at all levéis and are reflected throughout the community," says Dr. Robert L. Potts, school human relations ombudsman. He says the events in the schools the last couple of weeks cannot be understood apart from the general unrest among teachers and administrators, among students generally, and in the community. This unrest is accentuated, he says, by the events of the moment, such as violent reaction against busing for integration, antagonisms generated by teacher negotiations and the changes in school administration. "Our present situation of unrest in the schools cannot be understood without realizing that the present situation is the blasting out of many years of accumulated frustrations, resistance and even hostility toward the ineffectiveness of the schools to edúcate all students, all races and classes of students," Potts says. Seeking what he terms directions for solutions to the conditions in the schools, Potts says the following steps should be taken immediately: -The system make an immediate objective appraisal of our schools to make them humane. - Assure that all students experience equal treatment by school authorities, teachers and pólice. -Make teacher-student relations more effective. -Make immediate steps in the individual schools and system-wide to promote positive Communications and understanding between teachers, administrators, students, parents and community. - Administrators and counselors must be distributed throughout the buildings to be more readily accessible to students. - Obtain a wider commitment among staff and administrators to the Humaneness in Education program and provide additional resources and supports to accomplish this goal. - Students, including black students and narfints. must. become involved in developing rules for student conduct and the operations of the school programs so they become a shared responsibility. Potts' comments and recommendations were made in a release distributed to the press. Although many "new" programs have been instituted and schedules adjusted and committees formed, people and i tudes have not changed, Potts says. "Students are increasingly becoming alienated, turned-off by the system, and the minorities and the lower socioeconomic students are still falling behind in reading levéis and computational skills," he says. Despite all the "liberal, wise, humane rhetoric which is coming forth about positive programs and living together, etc. . . the fact is that the obvious frustrations and hostilities are still being charged almost exclusively to black students and their parents," Potts says. "It is misleading, false and divisive to direct public attention to the incidents of intimidation and extortion in the schools among a small number of black dents, ignore the acts of violence and disruptive behavior of white students, and thus attempt to direct attention away from the gross, long-time failure of this system to address the needs of black and all other students," he says. The unrest, frustration and anger of the moment, particularly among the black students, black staff, parents and community, sterns generally from the unfulfilled promises of the schools, Potts said. "I have not seen in print nor heard on news reports from statements of administrators any word to convey the truth that the tensions and conflicts of Thursday, Nov. 4, at Huron High School and Wednesday, Nov. 10, at Pioneer began by the impromptu, unauthorized gathering of predominantly white male students who verbalized openly their vigilante hostile aims against black students," says Potts. "The fact of unhappiness and anger among these students with how the administration has dealt with discipline problems was not justification for these klan tactics; nor can it be blamed for the open racial hostility and, in the Huron incident, attack," he explained. "Yes, they dispersed momentarily upon orders," Potts adds, "but they regrouped, paraded about and accelerated tensión; and none of them was suspended, read the trespass law, nor to this date (Nov. 15) arrested. "It is noted and known that in the face and presence of this taunting, only black students at Pioneer were arrested and literally acted upon," he said. "I have also not seen in print, though admitted by a school official, that at Huron, weapons were taken from white students in a gathering and placed in a pólice car, in their (pólice) presence, but no one was arrested or suspended." Referring to the arrest of Human Relations Worker Mrs. Shirley Gulley at Pioneer last Wednesday, he said: "No one has expressed the obvious inconsistency of our hiring an advocate for students, then allowing that person to be arrested, manhandled by pólice and charged for protesting the maltreatment of a student and for insisting on accompanying that student to the pólice station." i