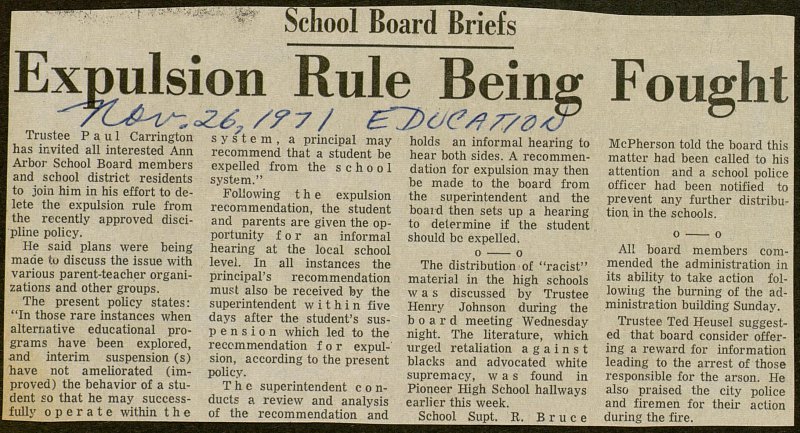 Trustee Paul Carrington has invited all interested Ann Arbor School Board members and school district residents to join him in his effort to delete the expulsión rule from the recently approved discipline policy. He said plans were being made to discuss the issue with various parent-teacher organizations and other groups. The present policy states: "In those rare instances when alternative educational programs have been explored, and interim suspension (s) have not ameliorated (improved) the behavior of a student so that he may successf ully opérate within the s y s t e m , a principal may recommend that a student be expelled from the school systern." FoLlowing the expulsión recoinmendation, the student and parents are given the opportunity for an informal hearing at the local school level. In all instances the principal's recommendation must also be received fey the superintendent w i t h i n five days after the student's suspension which led to the reccmmendation for expulsión, according to the present policy. The superintendent conducís a review and analysis of the recommendation and holds an informal hearing to hear both sides. A recommendation for expulsión may then be made to the board from the superintendent and the boaid then sets up a hearing to determine if the student should be expelled. o o The distribution of "racist" material in the high schools was discussed by Trustee Henry Johnson during the board meeting Wednesday night. The literature, which urgeil retaliation a g a i n s t blacks and advocated white supremacy, was found in Pioneer High School hallways earlier this week. School Supt. R. B r u c e McPherson told the board this matter had been called to his attention and a school pólice officer had been notified to prevent any further distribution, in the schools. o o All board members commended the administration in its ability to take action followitig the burning of the administration building Sunday. Trustee Ted Heusel suggested that board consider offering a reward for information leading to the arrest of those responsible for the arson. He also praised the city pólice and firemen for their action during the fire.