One Opinion From Huron: 'System Must Be Changed' 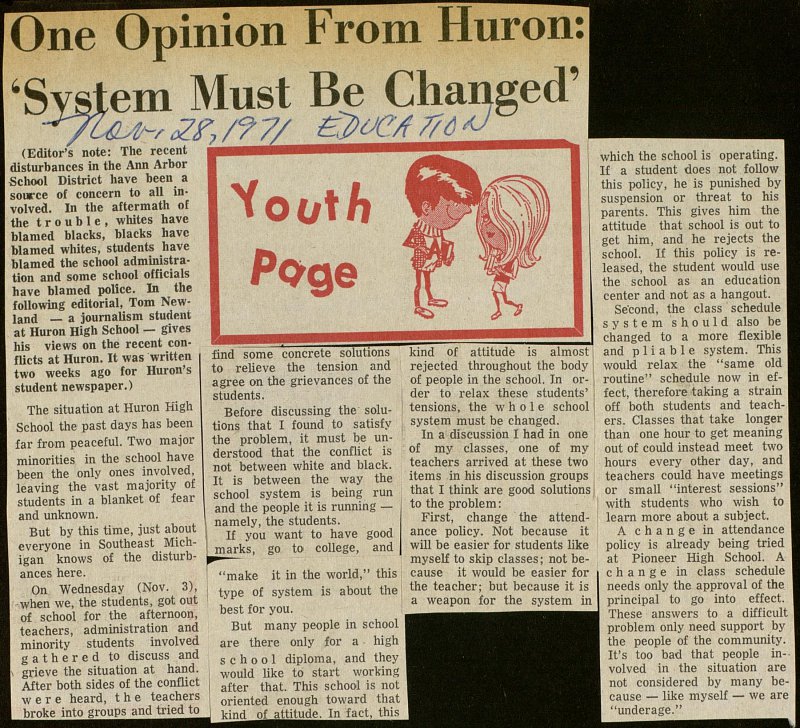 (Editor's note: The recent disturbances in the Ann Arbor School District have been a source of concern to all involved. In the aftermath of the trouble, whites have blamed blacks, blacks have blamed whites, students have blamed the school administration and some school officials have blamed pólice. In the following editorial, Tom Newland - a journalism student at Huron High School - gives his views on the recent conflicts at Huron. It was written two weeks ago for Huron's student newspaper.) The situation at Huron High School the past days has been far from peaceful. Two major minorities in the school have been the only ones involved, leaving the vast majority of students in a blanket of ie ar and unknown. But by this time, just about everyone in Southeast Michigan knows of the disturbI anees here. On Wednesday (Nov. 3), when we, the students, got out of school for the afternoon, teachers, administration and minority students involved gathered to discuss and grieve the situation at hand. After both sides of the conflict w e r e heard, the teachers I broke into aroups and tried to find some concrete solutions to relieve the tensión and agree on the grievances of the students. Before discussing the : tions that I found to satisfy ■ the problem, it must be understood that the conflict is not between white and black. It is between the way the school system is being run and the people it is running - namely, the students. If you want to have good marks, go to college, and "make it in the world," this type of system is about the best for you. But many people in school I are there only for a high I school diploma, and they I would like to start working I after that. This school is not I oriented enough toward that , kind of attitude. In f act, this kind of attitude is almost rejectèd throughout the body of people in the school. In order to relax these students' tensions, the w h o 1 e school system must be changed. In a discussion I had in one of my classes, one of my teachers arrived at these two items in his discussion groups that I think are good solutions to the problem: First, change the attendance policy. Not because it will be easier for students like myself to skip classes ; not because it would be easier for the teacher; but because it is a weapon for the system in which the school is operating. I If a student does not follow I this policy, he is punished byl suspension or threat to his I parents. This gives him the I attitude that school is out to I get him, and he rejects the I school. If this policy is I leased, the student would use I the school as an education I center and not as a hangout. Se'cond, the class schedule I system should also be I changed to a more flexible I and p 1 i a b 1 e system. This I would relax the "same oíd I routine" schedule now in I fect, therefore taking a strain I off both students and teach-l ers. Classes that take longer I than one hour to get meaning I out of could instead meet two I hours every other day, and I teachers could have meetings I or small "interest sessions" I with students who wish to learn more about a subject. A change in attendance policy is already being tried at Pioneer High School. A change in class schedule I needs only the approval of the principal to go into effect. These answers to a difficult problem only need support by the people of the community. It's too bad that people involved in the situation are not considered by many beI cause - like myself - we are I "underage."