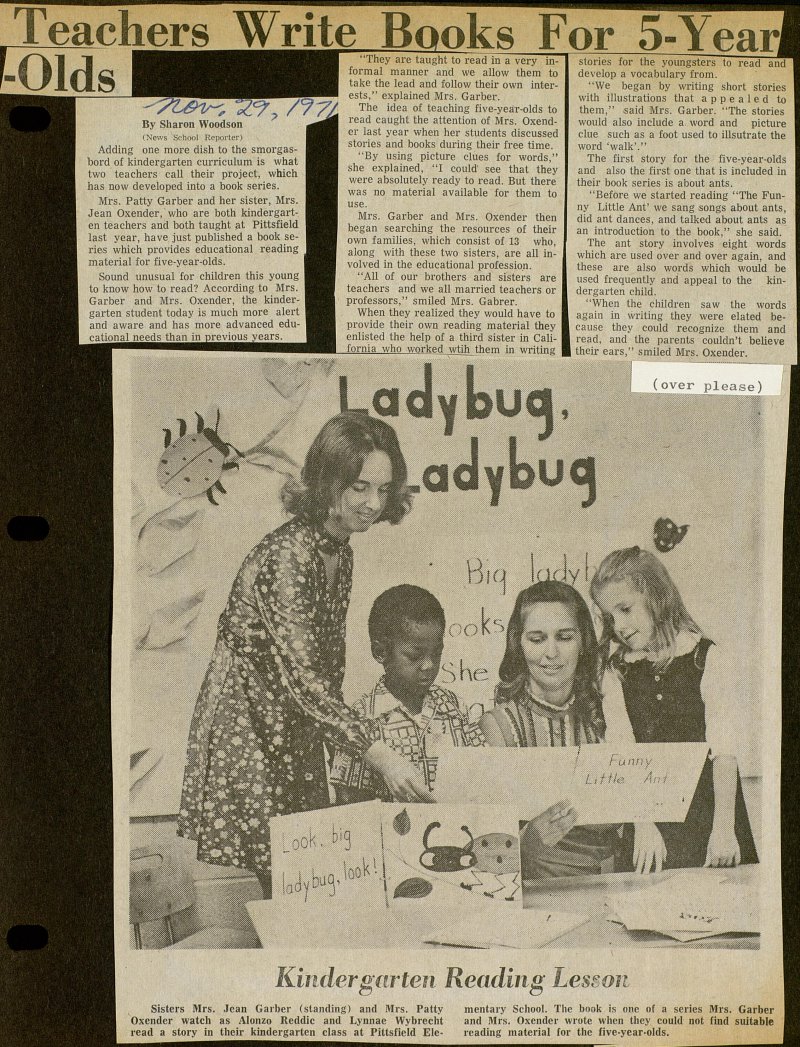 Adding one more dish to the smorgasbord of kindergarten curriculum is what two teachers cali their project, which has now developed into a book series. Mrs. Patty Garber and her sister, Mrs. Jean Oxender, who are both kindergarten teachers and both taught at Pittsfield last year, have just published a book series which provides educational reading material for five-year-olds. Sound unusual for children this young to know how to read? According to Mrs. Garber and Mrs. Oxender, the kindergarten student today is much more alert and aware and has more advanced educational needs than in Drevious vears. They are taught to read in a very informal manner and we allow them to take the lead and follow their own interests," explained Mrs. Garber. The idea of teaching five-year-olds to read caught the attention of Mrs. Oxender last year when her students discussed stories and books during their free time. "By using picture clues for words," she explained, "I could' see that they were absolutely ready to read. But there was no material available for them to use. Mrs. Garber and Mrs. Oxender then began searching the resources of their own families, which consist of 13 who, along with these two sisters, are all involved in the educational profession. "All of our brothers and sisters are teachers and we all married teachers or professors," smiled Mrs. Gabrer. When they realized they would have to provide their own reading material they enlisted the help of a third sister in California who worked wjjhjhem in writing stories for the youngsters to read ancP develop a vocabulary f rom. "We began by writing short stories with illustrations that appealed to them," said Mrs. Garber. "The stories would also include a word and picture clue such as a foot used to illsutrate the word 'walk'." The first story for the five-year-olds and also the first one that is included in their book series is about ants. "Before we started reading "The Funny Little Ant' we sang songs about ants, did ant dances, and talked about ants as an introduction to the book," she said. The ant story involves eight words which are used over and over again, and these are also words which would be used frequently and appeal to the kindergarten child. "When the children saw the words again in writing they were elated because they could recognize them and read, and the parents couldn't believe their ears," smiled Mrs. Oxenrier. (over please) S. . . (cont. ) "By the end of the semester these fiveyear-olds were making their own sentences and writing their own stories. "We never pressured the children into reading and we never spent more than about 15 minutes a day with this program," said Mrs. Garber. Both teachers commented that without the help of their students the book series could not have been written since they used their students to measure what things appealed to five-year-olds and what kept their interests. "We consider them our co-authors and they also helped us in determining what would make a good illustration for the stories," the teachers agreed. We hope our book series will begin to fill the gap in educational material for the five-year-old, they said. "Our first series, which includes flash cards and structioñsfóparents or teachers, are science oriented since we found most kindergarteners like insects." The book series was published this month by Ann Arbor Publishers. Mrs. Garber, who is again teaching kindergarten this year at Pittsfield, says that the book series teaches the students size relationships, directions and colors. i Mrs. Oxender is on leave this year in i California. I