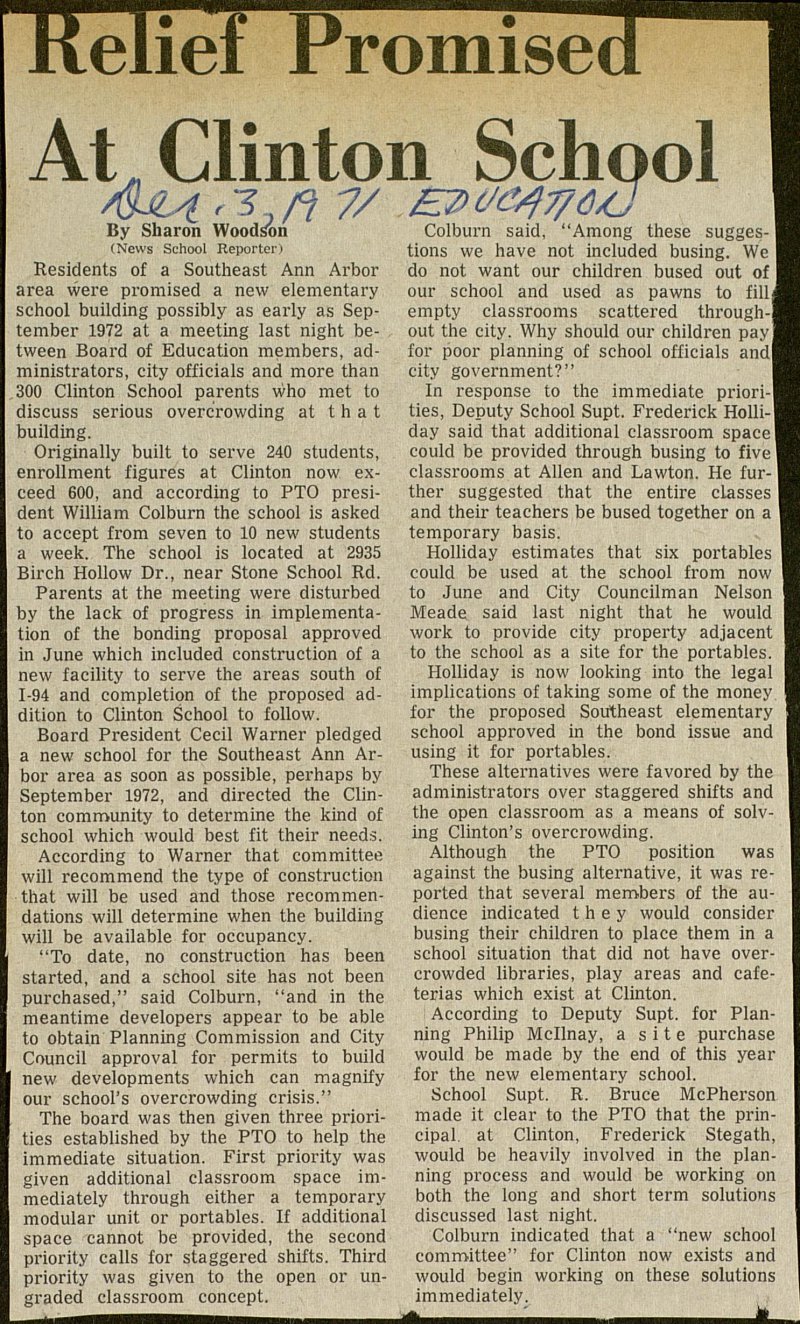 Residents of a Southeast Ann Arbor área were promised a new elementary school building possibly as eaiiy as September 1972 at a meeting last night between Board of Education members, administrators, city officials and more than 300 Clinton School parents who met to discuss serious overcrowding at t h a t building. Originally built to serve 240 students, enrollment figures at Clinton now exceed 600, and according to PTO president William Colburn the school is asked to accept from seven to 10 new students a week. The school is located at 2935 Birch Hollow Dr., near Stone School Rd. Parents at the meeting were disturbed by the lack of progress in implementation of the bonding proposal approved in June which included construction of a new facility to serve the areas south of 1-94 and completion of the proposed addition to Clinton School to follow. Board President Cecil Warner pledged a new school for the Southeast Ann Arbor area as soon as possible, perhaps by September 1972, and directed the Clinton community to determine the kind of school which would best fit their needs. According to Warner that committee will recommend the type of construction that will be used and those recommendations will determine when the building will be available for occupancy. "To date, no construction has been started, and a school site has not been purchased," said Colburn, "and in the meantime developers appear to be able to obtain Planning Commission and City Council approval for permits to build new developments which can magnify our school's overcrowding crisis." The board was then given three priorities established by the PTO to help the immediate situation. First priority was given additional classroom space immediately through either a temporary modular unit or portables. If additional space cannot be provided, the second priority calis for staggered shifts. Third priority was given to the open or ungraded classroom concept. Colburn said, "Among these 1 tions we have not included busing. We I do not want our children bused out of I our school and used as pawns to tillM empty classrooms scattered through-B out the city. Why should our children payB for poor planning of school officials andl city government?" In response to the immediate priori-B ties, Deputy School Supt. Frederick Holli-1 day said that additional classroom spaceB could be provided through busing to fivel classrooms at Allen and Lawton. He 1 ther suggested that the entire classes I and their teachers be bused together on a I temporary basis. I Holliday estimates that six portables I could be used at the school from now I to June and City Councilman Nelson 1 Meade said last night that he would I work to provide city property adjacent I to the school as a site for the portables. I Holliday is now looking into the legal I implications of taking some of the money I for the proposed Southeast elementary I school approved in the bond issue and using it for portables. These alternatives were favored by the administrators over staggered shifts and the open classroom as a means of solving Clinton's overcrowding. Although the PTO position was against the busing alternative, it was reported that several members of the audience indicated t h e y would consider busing their children to place them in a school situation that did not have overcrowded libraries, play áreas and cafeterías which exist at Clinton. According to Deputy Supt. for Planning Philip Mcllnay, a site purchase would be made by the end of this year for the new elementary school. School Supt. R. Bruce McPherson made it clear to the PTO that the principal, at Clinton, Frederick Stegath, would be heavily involved in the planning process and would be working on both the long and short term solutions discussed last night. Colburn indicated that a "new school committee" for Clinton now exists and would begin working on these solutions immediately.