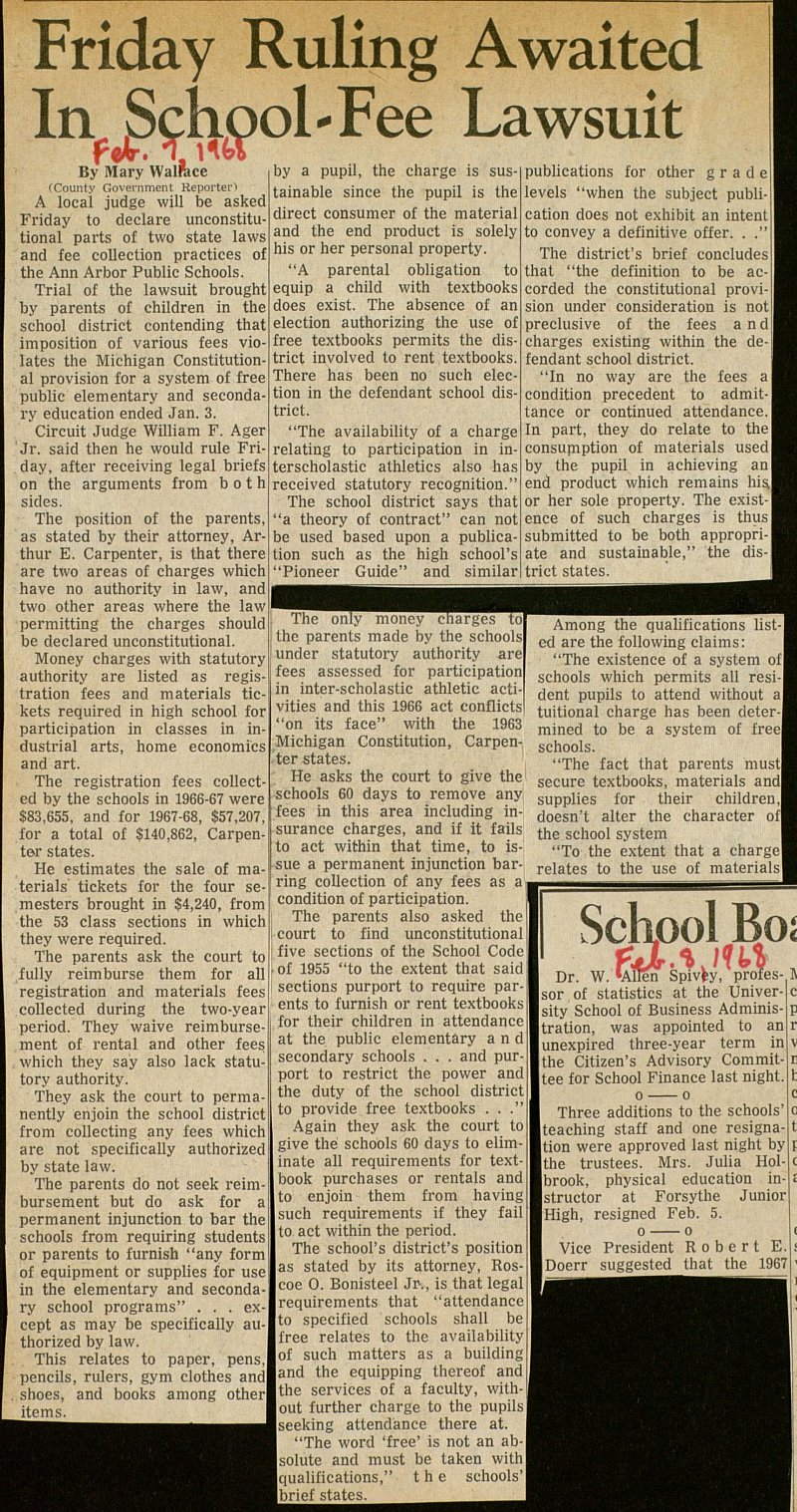 A local judge will be asked Friday to declare unconstitutional parts of two state laws and fee collection practices of the Ann Arbor Public Schools. Trial of the lawsuit brought by parents of children in the school district contending that imposition of various fees violates the Michigan Constitutional provisión for a system of free public elementary and secondary education ended Jan. 3. Circuit Judge William F. Ager Jr. said then he would rule Friday, after receiving legal brief s on the arguments from b o t h sides. The position of the parents, as stated by their attorney, Arthur E. Carpenter, is that there are two areas of charges which have no authority in law, and two other areas where the law permitting the charges should be declared unconstitutional. Money charges with statutory authority are listed as registration fees and m ateríais tickets required in high school for participation in classes in industrial arts, home economics and art. The registration fees collected by the schools in 1966-67 were $83,655, and for 1967-68, $57,207, for a total of $140,862, Carpente-r states. He estimates the sale of materials tickets for the four semesters brought in $4,240, from the 53 class sections in which they were required. The parents ask the court to fully reimburse them for all registration and m ateríais fees collected during the two-year period. They waive reimbursement of rental and other fees which they say also lack statutory authority. They ask the court to permanently enjoin the school district from collecting any fees which are not specifically authorized by state law. The parents do not seek reimbursement but do ask for a permanent injunction to bar the schools from requiring students or parents to furnish "any form of equipment or supplies for use in the elementary and secondary school programs" . . . except as may be specifically authorized by law. I This relates to paper, pens,l pencils, rulers, gym clothes andl shoes, and books among otherl items. by a pupil, the charge is sustainable since the pupil is the direct consumer of the material and the end product is solely his or her personal property. "A parental obligation to equip a child with textbooks does exist. The absence of an election authorizing the use of free textbooks permits the district involved to rent textbooks. There has been no such election in the defendant school district. "The availability of a charge relating to participation in interscholastic athletics also has received statutory recognition." The school district says that "a theory of contract" can not be used based upon a publication such as the high school's "Pioneer Guide" and similar The only money charges to the parents made by the schools under statutory authority are fees assessed for participation in inter-scholastic athletic activities and this 1966 act conflicts "on its face" with the 1963 Michigan Constitution, Carpenter states. He asks the court to give the schools 60 days to remove any fees in this area including insurance charges, and if it fails to act within that time, to issue a permanent injunction barring collection of any fees as a condition of participation. The parents also asked the court to find unconstitutional five sections of the School Code of 1955 "to the extent that said sections purport to require parents to furnish or rent textbooks for their children in attendance at the public elementary and secondary schools . . . and purport to restrict the power and the duty of the school district to pro vide f ree textbooks ..." Again they ask the court to give thé schools 60 days to elimínate all requirements for textbook purchases or rentáis and to enjoin them from having such requirements if they fail to act within the period. The school's district's position as stated by its attorney, Roscoe O. Bonisteel Ji, is that legal requirements that "attendance to specified schools shall be free relates to the availability of such matters as a building and the equipping thereof and the services of a faculty, with- out further charge to the pupils seeking attendance there at. "The word 'free' is not an absolute and must be taken with qualifications," the schools' brief states. I publications for other grade levéis "when the subject publication does not exhibit an intent to convey a definitive offer. . ." The district's brief concludes that "the definition to be accorded the constitutional provisión under consideration is not preclusive of the fees and charges existing within the defendant school district. "In no way are the fees ai condition precedent to admittance or continued attendance. In part, they do relate to the consumption of materials used by the pupil in achieving an end product which remains hisj or her sole property. The existence of such charges is thus submitted to be both appropriate and sustainable," the district states. Among the qualifications list-I ed are the following claims: "The existence of a system ofl schools which permits all resi-j dent pupils to attend without al tuitional charge has been deter-l mined to be a system of freel schools. "The f act that parents mustl secure textbooks, materials andl supplies for their childrenj doesn't alter the character ofl the school system "To the extent that a charge! relates to the use of materialsl