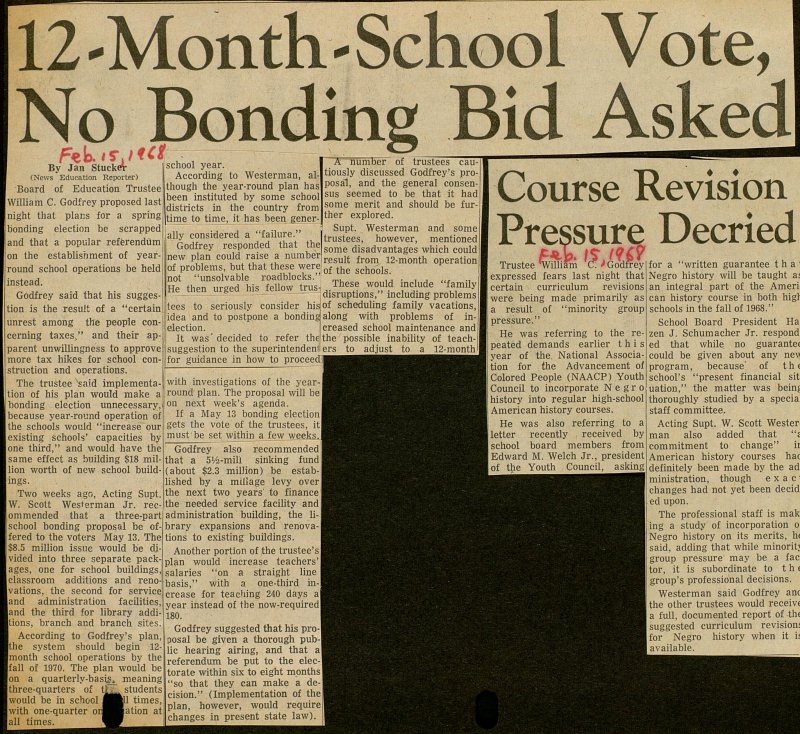 Board of Education Trustee William C. Godfrey proposed last night that plans for a spring bonding election be scrapped and that a popular referendum on the establishment of yearround school operations be held instead. Gódfrey said that his suggestion is the result of a "certain unrest among the people concerning taxes," and their apparent unwillingness to approve more tax hikes for school construction and operations. The trustee vsaid implementation of his plan would make a bonding election unnecessary, because year-round operation of the schools would "increasë our existing schools' capacities by one third," and would have the same effect as building $18 million worth of new school buildings. Two weeks ago, Acting Supt. W. Scott Westerman Jr. recommended that a three-part school bonding proposal be offered to the voters May 13. The $8.5 million issue would be divided into three separate packages, one for school buildings, classroom additions and reno.vations, the second for service and administration facilities, and the third for library additions, branch and branch sites. According to Godfrey's plan, the system should begin 12month school operations by the fall of 1970. The plan would be on a quarterly-bast? meaning three-quarters of tË. students would bc in school flll times, with one-quarter orBation at all times. V school year. According to Westerman, although the year-round plan has been instituted by some school districts in the country from time to time, it has been generlally considered a "failure." Godfrey responded that the new plan could raise a numbèr of problems, but that these were not "unsolvable roadblocks." He then urged his fellow trustees to seriously consider his idea and to postpone a bonding election. It was' decided to refer the suggestion to the superintendent for guidance in how to proceed with investigations of the yearround plan. The proposal will be on next week's agenda. If a May 13 bonding election gets the vote of the trustees, it must'be set_within__a_few__wee_ks_1J Godfrey also recommended ;hat a 5V2-mili sinking fund bout $2.3 milüon) be estabished by a millage levy over ;he next two years' to finance the needed service facility and administration building, the li)rary expansions and renovations to existing buildings. ; Another portion of the trustee's plan would increase teachers' salaries "on a straight line basis," with a one-third increase for teaching 240 days a year instead of the now-required 180. Godfrey suggested that his proposal be given a thorough public hearing airing, and that a referendum be put to the electorate within six to eight months "so that they can make a decisión." (Implementation of the plan, however, would require changes in present state law). A number of trastees cautiously discussed Godfrey's proposál, and the general consensus seemed to be that it had some merit and should be ther explored. Supt. Westerman and some trustees, however, mentioned some disadvantages which could I result from 12-month operation of the schools. These would include "family disruptions," including problems 3f scheduling family vacations, along with problems of inereased school maintenance and the possible inability of teachars to adjust to a 12-month