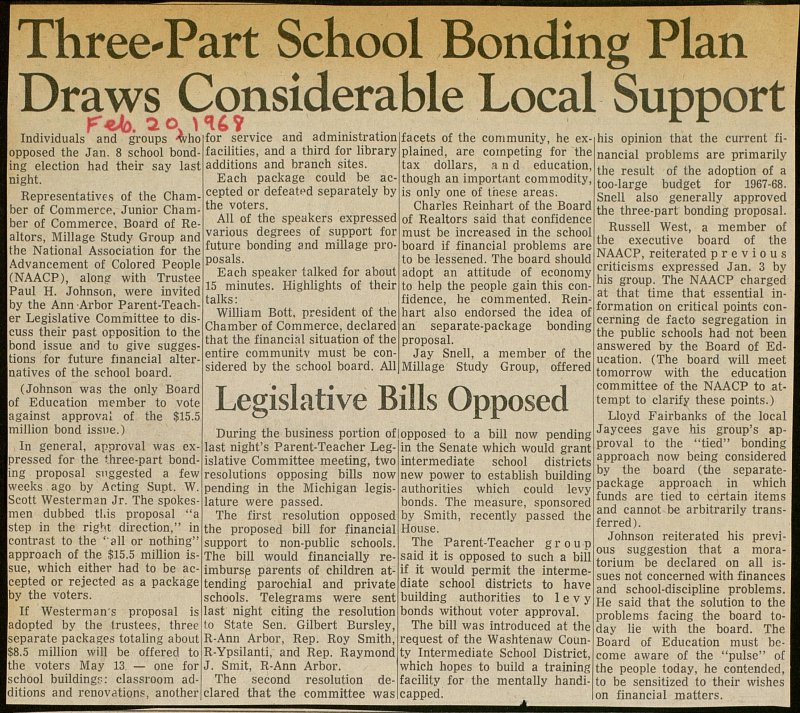 Individuals and groups who opposed the Jan. 8 school bonding election had their say last night. Representativos of the Chamber of Commerce, Junior Chamber of Commerce, Board of Realtors, Millage Study Group and the National Association for the Advancement of Colored People (NAACP), along with Trustee Paul H. Johnson, were invited by the Ann Arbor Parent-Teacher Legislative Committee to discuss their past opposition to the bond issue and to give suggestions for future financial alternatives of the school board. (Johnson was the only Board of Education member to vote against approvai of the $15.5 million bond issue.) In general, approvai was expressed for the three-part bonding proposal suggested a few weeks ago by Acting Supt. W. Scott Westerman Jr. The spokesmen dubbed tl.is proposal "a step in the right direction," in contrast to the "all or nothing" approach of the $15.5 million issue, which either had to be accepted or rejected as a package Iby the voters. If Westerman's proposal is adopted by the trustees, three separate packages totaling about $8.5 million will be offered to the voters May 13. - one for school building?: classroom additions and renovitions, another tor service and admimstration facilities, and a third for library additions and taranch sites. Each package could be accepted or defeatd separately by the voters. All of the speakers expressed various degrees of support for future bonding and millage proposals. Each speaker talked for about 15 minutes. Highlights of their talks: William Bott, president of the Chamber of Commerce, declared that the financial situation of the entire communitv must be considered by the school board. All íacets oí the community, he explained, are competing for the tax dollars, and education, though an important commodity, is only one of these áreas. Charles Reinhart of the Board of Realtors said that coníidence must be increased in the school board if financial problems are to be lessened. The board should adopt an attitude of economy to help the people gain this confidence, he commented. Reinhart also endorsed the idea of an separate-package bonding proposal. Jay Snell, a member of the Millage Study Group, offered his opinión that the current financial problems are primarily the result of the adoption of a too-large budget for 1967-68. Snell also generally approved the three-part bonding proposal. Russell West, a member of the executive board of the NAACP, reiterated p r e v i o u s criticisms expressed Jan. 3 by his group. The NAACP charged at that time that essential information on critical points concerning de facto segregation in the public schools had not been answered by the Board of Education. (The board will meet tomorrow with the education committee of the NAACP to attempt to clarify these points.) Lloyd Fairbanks of the local Jaycees gave his group's approval to the "tied" bonding approach now being considered by the board (the separatepackage approach in which funds are tied to certain items and cannot be arbitrarily transferred). Johnson reiterated his previous suggestion that a moratorium be declared on all issues not concerned with finances and school-discipline problems. He said that the solution to the problems facing the board today lie with the board. Thé Board of Education must become aware of the "pulse" of the people today, he contended, to be sensitized to their wishes on financial matters. Legislative Bills Opposed During the business portion of I last night's Parent-Teacher Legislative Committee meeting, two resolutions opposing bilis now pending in the Michigan legislature were passed. The first resolution opposed the proposed bill for financial support to non-public schools. The bill would financially reimburse parents of children attending parochial and private schools. Telegrams were sent last night citing the resolution to State Sen. Gilbert Bursley, R-Ann Arbor, Rep. Roy Smith, R-Ypsilanti, and Rep. Raymond J. Smit, R-Ann Arbor. The second resolution declared that the committee was opposed to a bilí now pending in the Senate which would grant intermedíate school districts new power to establish building authorities which could levy bonds. The measure, sponsored by Smith, recently passed the House. The Parent-Teacher group said it is opposed to such a bilí if it would permit the intermedíate school districts to have building authorities to levy bonds without voter approval. The bill was introduced at the request of the Washtenaw County Intermedíate School District, which hopes to build a training facility for the mentally handicapped.