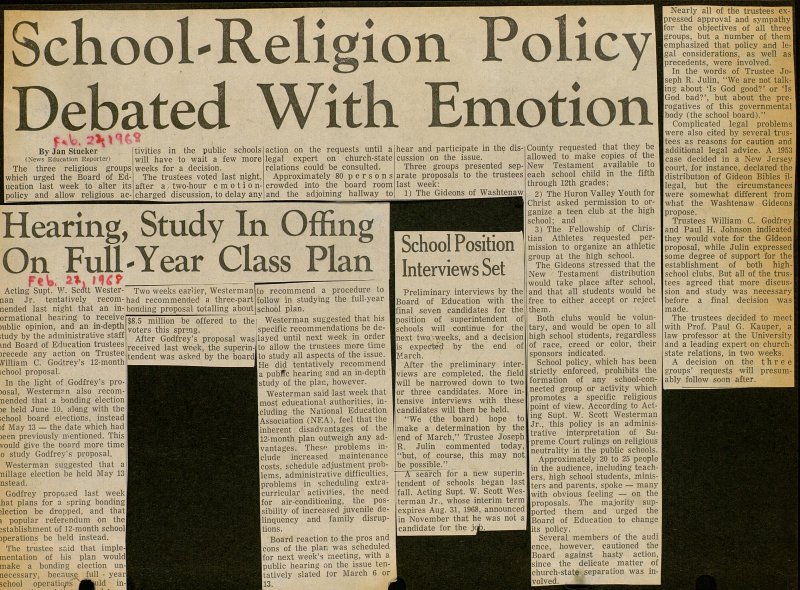 The three religious groups which urged the Board of Education last week to alter its policy and allow religious tivities in the public schools will have to wait a few more weeks for a decisión. The trustees voted last night, after a , two-hour e m o t i o ncharged discussion, to delay any action on the requests until a legal expert on church-state relations could be consulted. Approximately 80 persons crowded into the board room and the adjoining hallway to hear and particípate in the discussion on the issue. Three groups presented separate proposals to the trustees last week: 1) The Gideons of Washtenaw County requested that they be allowed to make copies of the New Testament available to each school child in the fifth through 12th grades; 2) The Huron Valley Youth for Christ asked permission to organize a teen club at the high school; and 3) The Fellowship of Chrisian Athletes requested permission to organize an athletic group at the high school. The Gideons stressed that the New Testament distribution would take place after school, and that all students would be 'ree to either accept or reject hem. Both clubs would be volun;ary, and would be open to all ligh school students, regardless of race, creed or color, their sponsors indicated. School policy, which has been strictly enforced, prohibits the 'ormation of any school-connected group or activity which promotes a speeific religious joint of view. According to Actng Supt. W. Scott Westerman Jr., this policy is an adminis:rative interpretation of Supreme Court rulings on religious neutrality in the public schools. Approximately 20 to 25 people in the audience, including teachers, high school students, ministers and parents, spoke - many with obvious feeling - on the proposals. The majority supported them and urged the Board of Education to change its policy. Several members of the audi snee, however, cautioned the I Board against hasty action, I since the delicate matter ofl ehurch-state separation was in-l volved . I Nearly all of the trustees ex-I pressed approval and sympathyj for the objectives of all threel groups, but a number of theml emphasized that policy and 1 gal considerations, as well asi precedents, were involved. In the words of Trustee Joseph R. Julin, "We are not 1 ing about 'Is God good?' or 'Is God bad?', but about the prerogatives of this governmental body (the school board)." Complicated legal problems were also cited by several trustees as reasons for caution and additional legal advice. A 1953 case decided in a New Jersey court, ior instance, declared the distribution of Gideon Bibles illegal, but the circumstances I were somewhat different from what the Washtenaw Gideons propose. Trustees William C. Godfrey and Paul H. Johnson indicated they would vote for the Gideon proposal, white Julin expressedl some degree of support for the establishment of both highschool clubs. But all of the trustees agreed that more discussion and study was necessary before a final decisión was made. The trustees decided to meet with Prof. Paul G. Kauper, a law professor at the University and a leading expert on churchstate relations, in two weeks. A decisión on the three groups' requests will presumably follow soon after.