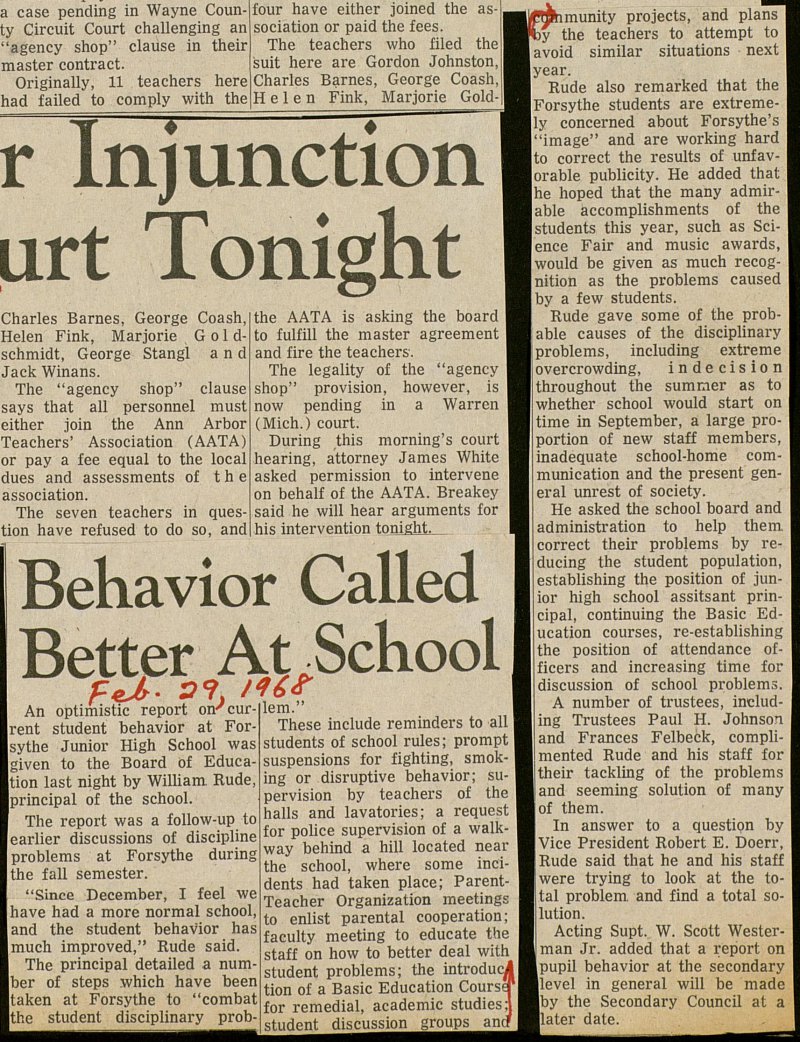 An optimistic report on'current student behavior at Forsythe Junior High School was given to the Board of Education last night by William. Rude, principal of the school. The report was a follow-up to earlier discussions of discipline problems at Forsythe during the fall semester. "Since December, I feel we have had a more normal school, and the student behavior has much improved," Rude said. The principal detailed a number of steps which have been taken at Forsythe to "combat the student disciplinary lem." I These include reminders to all students of school rules; prompt suspensions for fighting, smoking or disruptive behavior; supervisión by teachers of the halls and lavatories; a request for pólice supervisión of a walkway behind a hill located near the school, where some incidents had taken place; ParentTeacher Organization meetings to enlist parental cooperation; faculty meeting to edúcate the staff on how to better deal with student problems; the introducá tion of a Basic Education CourseT for remedial, academie studies student discussion groups ancf Mhmunity projects, and plans by the teachers to attempt to avoid similar situations next year. Rude also remarked that the Forsythe students are extremely concerned about Forsythe' s "image" and are working hard to correct the results of unfavorable publicity. He added that he hoped that the many admirable accomplishments of the students this year, such as Science Fair and music awards, would be given as much recognition as the problems caused by a few students. Rude gave some of the probable causes of the disciplinary problems, including extreme overcrowding, indecisión throughout the summer as to whether school would start on time in September, a large proportion of new staff members, inadequate school-home communication and the present general unrest of society. He asked the school board and administration to help them. correct their problems by reducing the student population, establishing the position of junior high school assitsant principal, continuing the Basic Education courses, re-establishing the position of attendance officers and increasing time for discussion of school problems. A number of trustees, including Trustees Paul H. Johnson and Francés Felbeck, complimented Rude and his staff for their tackling of the problems and seeming solution of many of them. In answer to a question by Vice President Robert E. Doerr, Rude said that he and his staff were trying to look at the total problem. and find a total solution. Acting Supt. W. Scott Westerman Jr. added that a report on pupil behavior at the secondary ilevel in general will be made by the Secondary Council at a later date.