Full-year Schooling To Be Given Airing 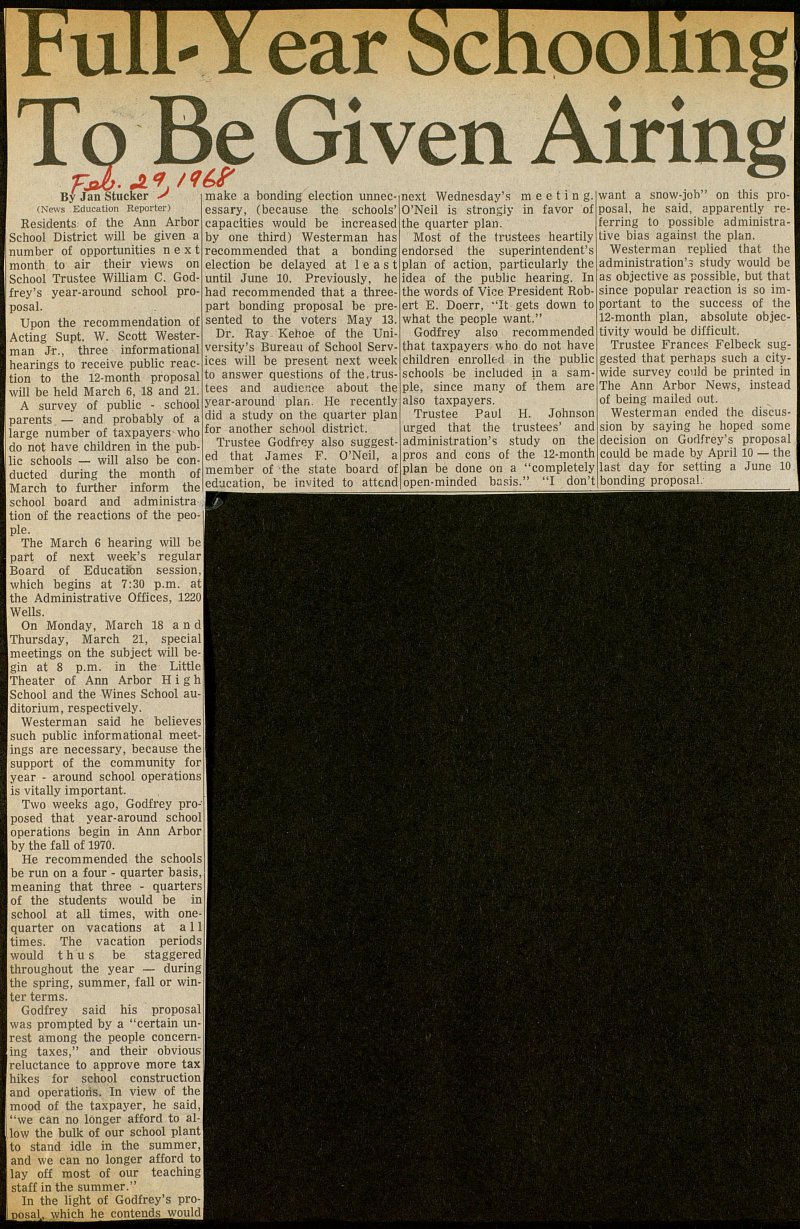 Residents of the Ann Arbor School District will be given a number of opportunities n e x t month to air their views on School Trustee William C. Godfrey's year-around school proposal. Upon the recommendation of Acting Supt. W. Scott Westerman Jr., three informational hearings to receive public reaction to the 12-month proposal will be held March 6, 18 and 21. A survey of public - school parents - and probably of a large number of taxpayers-who do not have children in the public schools - will also be conducted during the month of March to further inform the school board and administra tion of the reactions of the people. The March 6 hearing will be paft of next week's regular Board of Educatibn session, which begins at 7:30 p.m. at the Administrative Offices, 1220 Wells. On Monday, March 18 and Thursday, March 21, special meetings on the subject will begin at 8 p.m. in the Little Theater of Ann Arbor High School and the Wines School auditorium, respectively. Westerman said he believes such public informational meetings are necessary, because the support of the community for year - around school operations is vitally important. Two weeks ago, Godfrey proposed that year-around school operations begin in Ann Arbor by the fall of 1970. He recommended the schools be run on a four - quarter basis, meaning that three - quarters of the students would be in school at all times, with onequarter on vacations at all times. The vacation periods would t h u s be staggered throughout the year - during the spring, summer, fall or winter terms. Godfrey said his proposal was prompted by a "certain unrest among the people concerning taxes," and their obvious reluctance to approve more tax hikes for school construction and operations. In view of the mood of the taxpayer, he said, "we can no lónger afford to allow the bulk of our school plant to stand idle in the summer, and we can no longer afford to lay off most of our teaching staff in the summer." In the light of Godfrey's proposal, which he conteuds would make a bonding election unnecessary, (because the schools' capacities would be increased by one third) Westerman has recommended that a bonding election be delayed at least until June 10. Previously, he had recommended that a threepart bonding proposal be presented to the voters May 13. Dr. Ray Kehoe of the University's Bureau of School Services will be present next week to answer questions of the, trustees and audience about the year-around plan. He recently did a study on the quarter plan for another school district. Trustee Godfrey also suggested that James F. O'Neil, a member of the state board of education, be invited to attend next Wednesday's meeting. O'Neil is strongiy in favor oí the quarter plan. Most of the trustees heartily endorsed the superintendent's plan of action, particularly the idea of the public hearing. In the words of Viee President Robert E. Doerr, "'It gets down to what the pecple want." Godfrey also recommended that taxpayers who do not have children enrolled in the public schools be included in a sample, since many of them are also taxpayers. Trustee Paul H. Johnson urged that the trustees' and administration's study on the pros and cons of the 12-month plan be done on a "completely open-minded basis." "I don't want a snow-job" on this proposal, he said, apparently referring to possible administrative bias againsi the plan. Westerman replied that the administration'.? study would be as objective as possible, but that since popular reaction is so important to the success of the 12-month plan, absolute objectivity would be difficult. Trustee Francés Felbeck suggested that perhaps such a citywide survey could be printed in The Ann Arbor News, instead of being mailed out. Westerman ended the discussion by saying he hoped some decisión on Godfrey's proposal could be made by April 10 - the last day for setting a June 10 bonding proposa!.