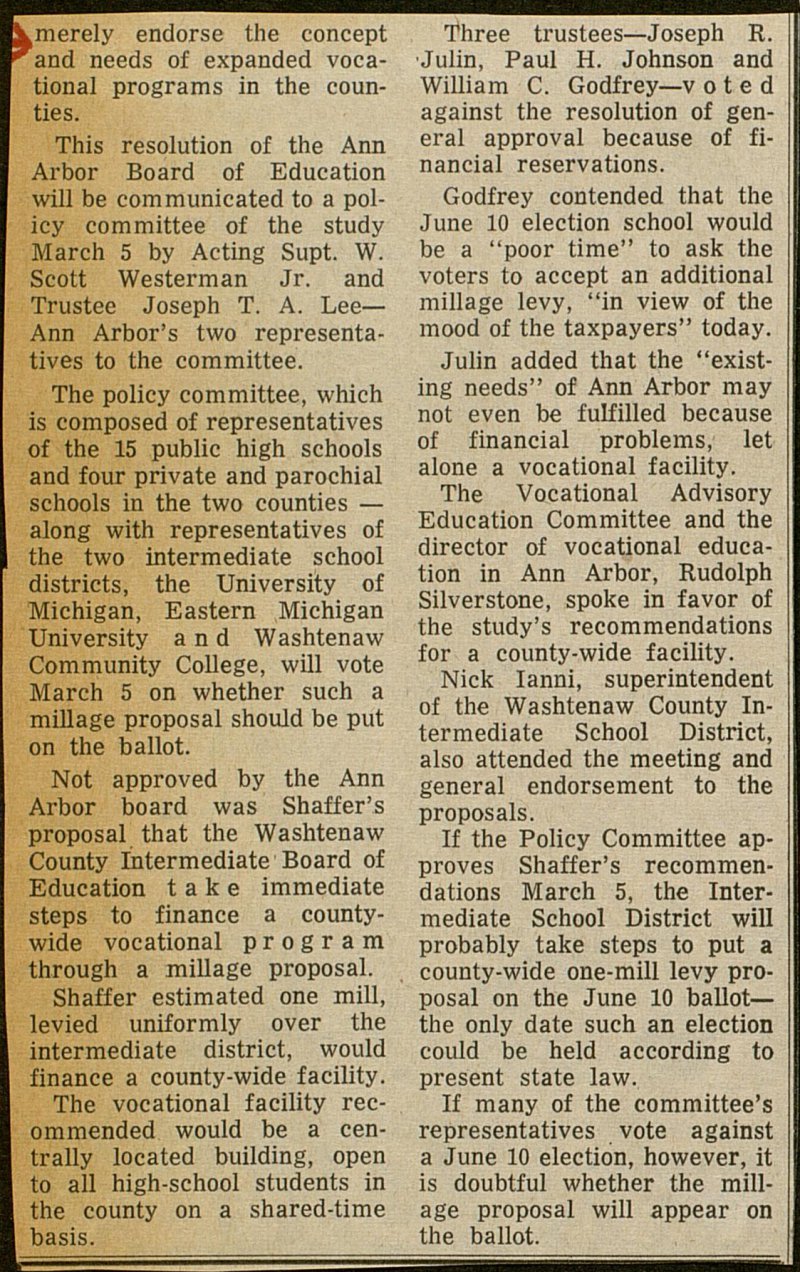 kmerely endorse the concept 'and needs of expanded vocational programs in the counties. This resolution of the Ann Arbor Board of Education will be communicated to a policy committee of the study March 5 by Acting Supt. W. Scott Westerman Jr. and Trustee Joseph T. A. Lee- Ann Arbor's two representatives to the committee. The policy committee, which is composed of representatives of the 15 public high schools and four private and parochial schools in the two counties - along with representatives of the two intermedíate school districts, the University of Michigan, Eastern Michigan University and Washtenaw Community College, will vote March 5 on whether such a millage proposal should be put on the ballot. Not approved by the Ann Arbor board was Shaffer's proposal that the Washtenaw County Intermedíate Board of Education t a k e immediate steps to finance a countywide vocational program through a millage proposal. Shaffer estimated one mili, levied uniformly over the intermedíate district, would finance a county-wide facility. The vocational facility recommended would be a centrally located building, open to all high-school students in the county on a shared-time basis. Three trustees- Joseph R. Julin, Paul H. Johnson and William C. Godfrey- v o t e d against the resolution of general approval because of financial reservations. Godfrey contended that the June 10 election school would be a "poor time" to ask the voters to accept an additional millage levy, "in view of the mood of the taxpayers" today. Julin added that the "existing needs" of Ann Arbor may not even be fulfilled because of financial problems, let alone a vocational facility. The Vocational Advisory Education Committee and the director of vocational education in Ann Arbor, Rudolph Silverstone, spoke in favor of the study's recommendations for a county-wide facility. Nick Ianni, superintendent of the Washtenaw County Intermedíate School District, also attended the meeting and general endorsement to the proposals. If the Policy Committee approves Shaffer's recommendations March 5, the Intermedíate School District will probably take steps to put a county-wide one-mill levy proposal on the June 10 ballot - the only date such an election could be held according to present state law. If many of the committee's representatives vote against a June 10 election, however, it is doubtful whether the millage proposal will appear on the ballot.