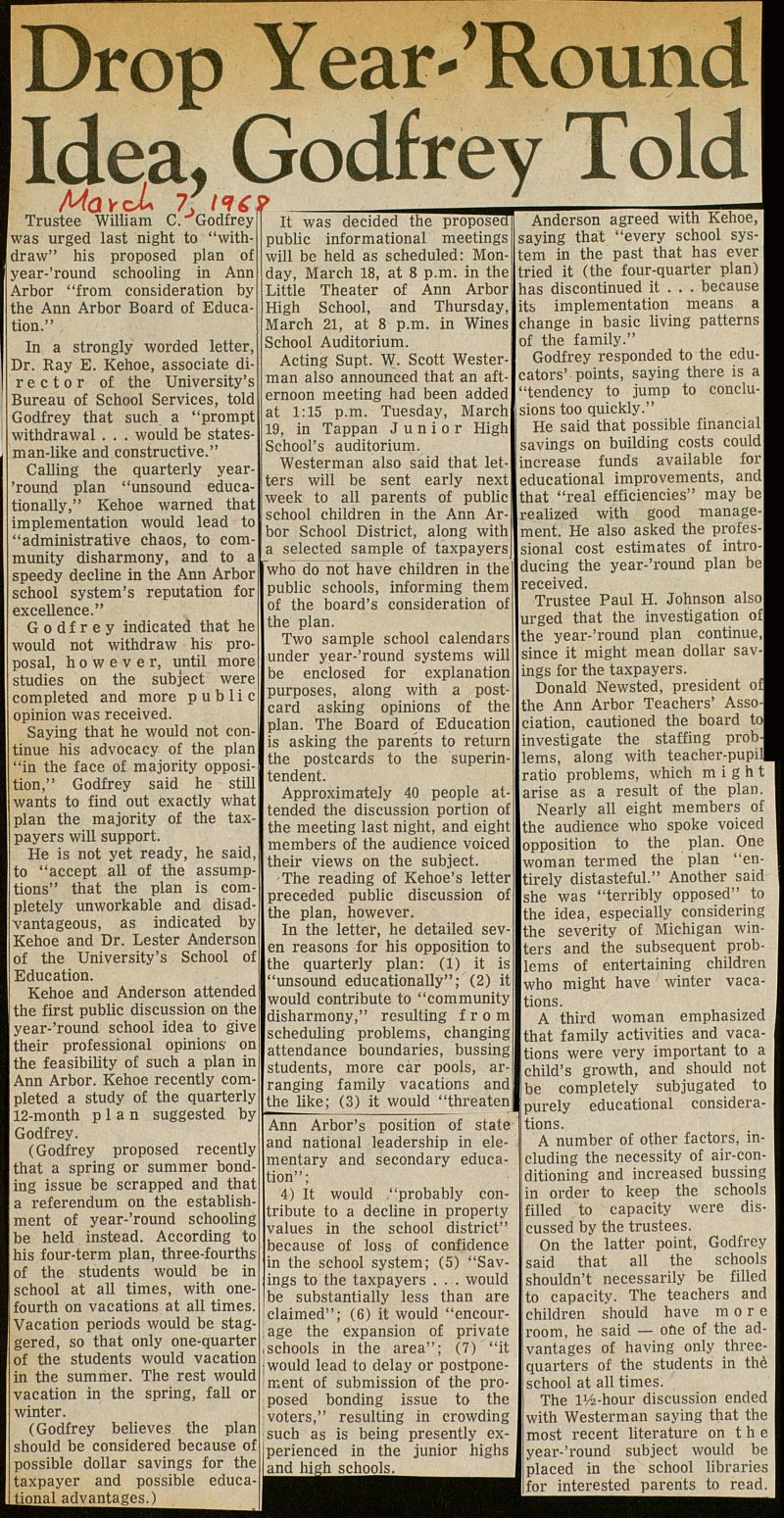 Trustee William C. Godfrey was urged last night to "withdraw" his proposed plan of year-'round schooling in Ann Arbor "f rom consideration by the Ann Arbor Board of Education." ín a strongly worded letter, Dr. Ray E. Kehoe, associate dire c t o r of the University's Bureau of School Services, told Godfrey that such a "prompt withdrawal . . . would be statesman-like and constructive." Calling the quarterly year'round plan "unsound educationally," Kehoe warned that implementation would lead to "administrative chaos, to community disharmony, and to a speedy decline in the Ann Arbor school system's reputation for excellence." G o d f r e y indicated that he would not withdraw his proposal, h o w e v e r, until more studies on the subject were completed and more public opinión was received. Saying that he would not continue his advocacy of the plan "in the face of majority opposition," Godfrey said he still wants to find out exactly what plan the majority of the taxpayers will support. He is not yet ready, he said, to "accept all of the assumptions" that the plan is completely unworkable and disadvantageous, as indicated tay Kehoe and Dr. Lester Anderson of the University's School of Education. Kehoe and Anderson attended the first public discussion on the year-'round school idea to give their professional opinions on the feasibility of such a plan in Ann Arbor. Kehoe recently completed a study of the quarterly 12-month plan suggested by Godfrey. (Godfrey proposed recently that a spring or summer bonding issue be scrapped and that a referendum on the establishment of year-'round schooling be held instead. According to his four-term plan, three-fourths of the students would be in school at all times, with onefourth on vacations at all times. Vacation periods would be staggered, so that only one-quarter of the students would vacation in the summer. The rest would vacation in the spring, fall or winter. (Godfrey believes the plan should be considered because of possible dollar savings for the taxpayer and possible educational advantages.) It was decided the proposed public informational meetings will be held as scheduled: Monday, March 18, at 8 p.m. in the Little Theater of Ann Arbor High School, and Thursday, March 21, at 8 p.m. in Wines School Auditorium. Acting Supt. W. Scott Westerman also announced that an afternoon meeting had been added at 1:15 p.m. Tuesday, March 19, in Tappan Junior High School's auditorium. Westerman also said that letters will be sent early next week to all parents of public school children in the Ann Arbor School District, along with a selected sample of taxpayers who do not have children in the public schools, informing them of the board' s consideration of the plan. Two sample school calendars under year-'round systems will be enclosed for explanation purposes, along with a posteará asking opinions of the plan. The Board of Education is asking the pareñts to return the postcards to the superintendent. Approximately 40 people attended the discussion portion of the meeting last night, and eight members of the audience voiced their views on the subject. -The reading of Kehoe's letter preceded public discussion of the plan, however. In the letter, he detailed seven reasons for his opposition to the quarterly plan: (1) it is "unsound educationally"; (2) it would contribute to "community disharmony," resulting f r o m scheduling problems, changing attendance boundaries, bussing students, more car pools, arranging family vacations and the like; (3) it would "threaten Ann Arbor's position of state and national leadership in elementary and secondary education"; 4) It would "probably contribute to a decline in property values in the school district" because of loss of confidence in the school system; (5) "Savings to the taxpayers . . . would be substantially less than are claimed"; (6) it would "encourage the expansión of private schools in the area"; (7) "it would lead to delay or postponement of submission of the proposed bonding issue to the voters," resulting in crowding such as is being presently experienced in the junior highs and high schools. Anderson agreed with Kehoe, aying that "every school sysem in the past that has ever ried it (the four-quarter plan) las discontinued it . . . because ts implementation means a change in basic living patterns of the family." Godfrey responded to the eduators' points, saying there is a 'tendency to jump to concluions too quickly." He said that possible financian savings on building costs could ncrease funds available for educational improvements, and ;hat "real efficiencies" may be realized witb. good management. He also asked the professional cost estimates of introducing the year-'round plan be received. Trustee Paul H. Johnson also urged that the investigation of ;he year-'round plan continue,! since it might mean dollar savmgs for the taxpayers. Donald Newsted, president of the Ann Arbor Teachers' Association, cautioned the board tol investigate the staffing problems, along with teacher-pupill ratio problems, which might arise as a result of the plan. Nearly all eight members of the audience who spoke voiced opposition to the plan. One woman termed the plan "entirely distasteful." Another said she was "terribly opposed" to the idea, especially considering the severity of Michigan winters and the subsequent problems of entertainüig children who might have winter vacations. A third woman emphasized that family activities and vacations were very important to a child's growth, and should not be completely subjugated to purely educational considerations. A number of other factors, including the necessity of air-conditioning and increased bussing in order to keep the schools filled to capacity were discussed by the trustees. On the latter point, Godfrey said that all the schools shouldn't necessarily be filled to capacity. The teachers and ehildren should have more room, he said - oñe of the advantages of having only threequarters of the students in thè school at all times. The lVi-hour discussion ended with Westerman saying that the most recent literature on t h e year-'round subject would be placed in the school libraries for interested parents to read.