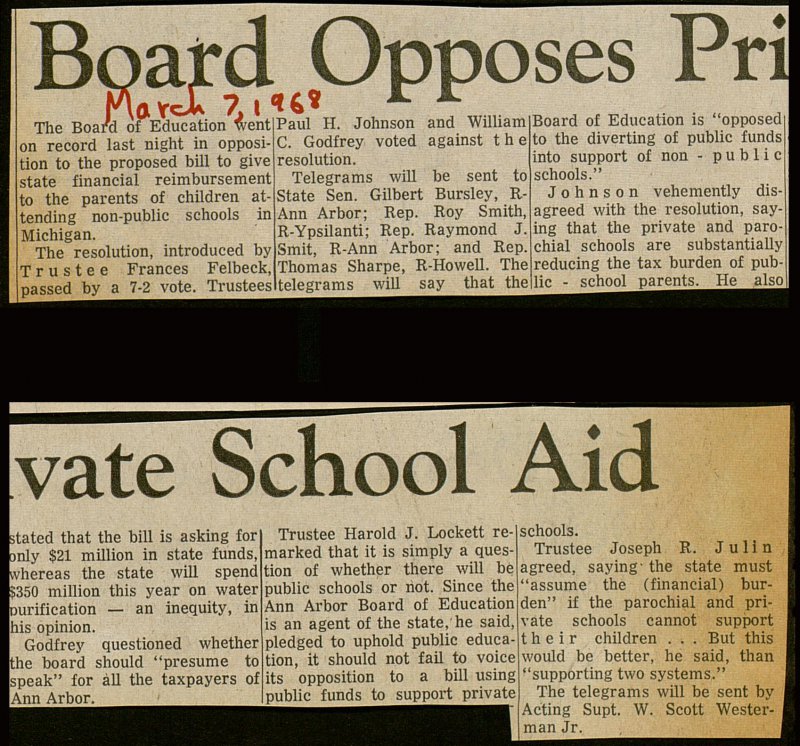 The Board of Education went on record last night in opposition to the proposed bill to give state financia! reimbursement to the parents of children attending non-public schools in Michigan. The resolution, introduced by Trustee Francés Felbeck, passed by a 7-2 vote. Trustees Paul H. Johnson and William C. Godfrey voted against the resolution. Telegrams will be sent to State Sen. Gilbert Bursley, RAnn Arbor; Rep. Roy Smith, R-Ypsilanti; Rep. Raymond J. Smit, R-Ann Arbor; and Rep. Thomas Sharpe, R-Howell. The telegrams will say that the Board of Education is "opposedi, to the diverting of public funds ■ into support of non - public schools." Johnson vehemently disagreed with the resolution, saying that the private and parochial schools are substantially reducing the tax burden of public - school parents. He also stated that the bill is asking for only $21 million in state funds, whereas the state will spend $350 million this year on water ourification - an inequity, in his opinión. Godfrey questioned whether the board should "presume to speak" for áll the taxpayers of Ann Arbor. Trustee Harold J. Lockett remarked that it is simply a question of whether there will bé public schools or not. Since the Ann Arbor Board of Education is an agent of the state, he said, pledged to uphold public education, it should not fail to voice its opposition to a bilí using public funds to support private schools. Trustee Joseph R. J u 1 i n agreed, the state must "assume the (financial) burden" if the parochial and private schools cannot support t h e i r children . . . But this would be better, he said, than "supporting two systems." The telegrams will be sent by Acting Supt. W. Scott Westerman Jr.