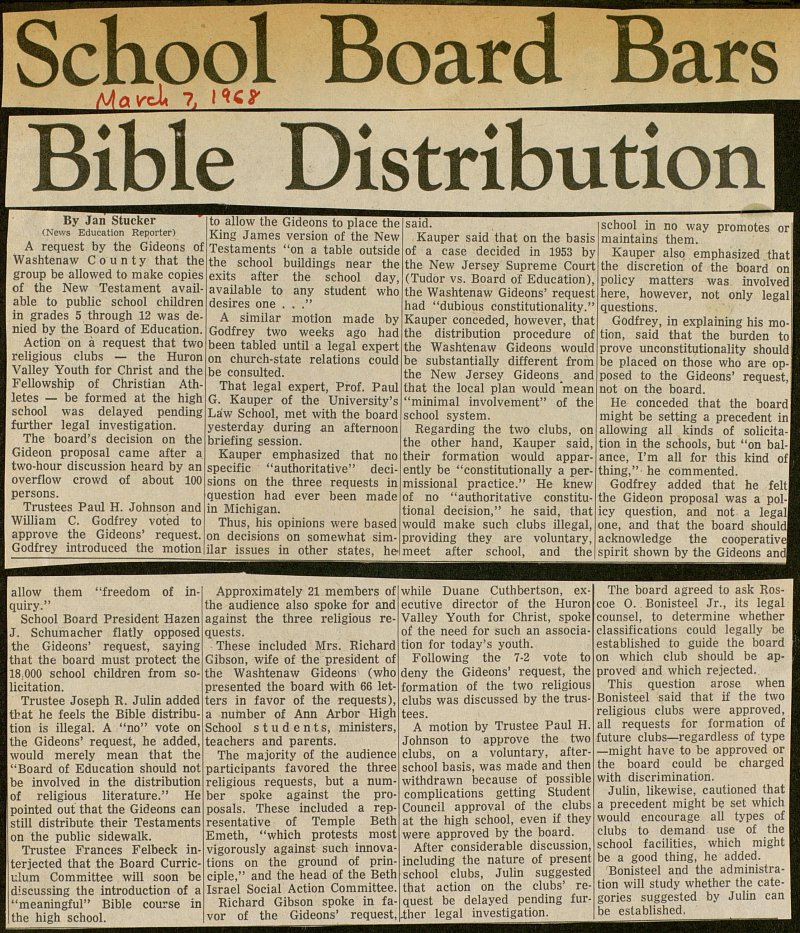 A request by the Gideons of Washtenaw County that the group be allowed to make copies of the New Testament available to public school children in grades 5 through 12 was denied by the Board of Education. Action on á request that two religious clubs - the Hurón Valley Youth for Christ and the Fellowship of Christian Athletes - be formed at the high school was delayed pending further legal investigation. The board's decisión on the Gideon proposal carne after a two-hour discussion heard by an overflow crowd of about 100 persons. Trustees Paul H. Johnson and William C. Godfrey voted to approve the Gideons' request. Godfrey introduced the motion to allow the Gideons to place the King James version of the New Testaments "on a table outside the school buildings near the exits after the school day, available to any student who desires one . . ." A similar motion made by Godfrey two weeks ago had been tabled until a legal expert on church-state relations could be consulted. That legal expert, Prof. Paul G. Kauper of the University's Láw School, met with the board yesterday during an afternoon briefing session. Kauper emphasized that no specific "authoritative" decisions on the three requests in question had ever been made in Michigan. Thus, his opinions were based an decisions on somewhat similar issues in other states, hfr said. Kauper said that on the basis of a case decided in 1953 by the New Jersey Supreme Court (Tudor vs. Board of Education), the Washtenaw Gideons' request had "dubious constitutionality." Kauper conceded, however, that the distribution procedure of the Washtenaw Gideons would be substantially different from the New Jersey Gideons and that the local plan would "mean "minimal involvement" of the school system. Regarding the two clubs, on the other hand, Kauper said, their formation would apparently be "constitutionally a permissional practice." He knew of no "authoritative constitu;ional decisión," he said, that would make such clubs illegal, providing they are voluntary, meet after school, and the school in no way promotes orí maintains them. Kauper also emphasized that the discretion of the board on policy matters was involved here, however, not only legal questions. Godfrey, in explaining his motion, said that the burden to prove unconstitutionality should be placed on those who are opposed to the Gideons' request, not on the board. He conceded that the board might be setting a precedent in allowing all kinds of solicitation in the schools, but "on bal-I anee, I'm all for this kind ofl he cómmented. Godfrey added that he feltl ;he Gideon proposal was a pol-I icy question, and not a legall one, and that the board shouldl acknowledge the cooperativel spirit shown by the Gideons and! allow them "freedom of inquiry." School Board President Hazen J. Schumacher flatly opposed the Gideons' request, saying that the board must protect the 18,000 school children from solicitation. Trustee Joseph R. Julin added that he feels the Bible distribution is illegal. A "no" vote on the Gideons' request, he added, would merely mean that the "Board of Education should not be involved in the distribution of religious literature." He pointed out that the Gideons can still distribute their Testaments on the public sidewalk. Trustee Francés Felbeck interjected that the Board Curriculum Committee will soon be discussing the introduction of a "meaningful" Bible course in the high school. Approximately 21 members of the audience also spoke for and against the three religious requests. These included Mrs. Richard Gibson, wife of the president of the Washtenaw Gideons (who presented the board with 66 letters in favor of the requests), a number of Ann Arbor High School student s, ministers, teachers and parents. The majority of the audience participants favored the three religious requests, but a number spoke against the proposals. These included a representative of Temple Beth Emeth, "which protests most vigorously against such innovations on the ground of principie," and the head of the Beth Israel Social Action Committee. Richard Gibson spoke in favor of the Gideons' request, while Duane Cuthbertson, executive director of the Huron Valley Youth for Christ, spoke of the need for such an association for today's youth. Following the 7-2 vote to deny the Gideons' request, the formation of the two religious clubs was discussed by the trustees. A motion by Trustee Paul H. Johnson to approve the two clubs, on a voluntary, afterschool basis, was made and then withdrawn because of possible compücations getting Student Council approval of the clubs at the high school, even if they were approved by the board. After considerable discussion, including the nature of present school clubs, Julin suggested that action on the clubs' request be delayed pending fur.ther legal investigation. The board agreed to ask Roscoe O. .Bonisteel Jr., its legal counsel, to determine whether classifications could legally be established to guide the board on which club should be approved and which rejected.. This question arose when Bonisteel said that if the two religious clubs were approved, all requests for formation of future clubs- regardless of type - might have to be approved or the board could be charged with discrimination. Julin, likewise, cautioned that a precedent might be set which would encourage all types of clubs to demand use of the school facilities, which might be a good thing, he added. Bonisteel and the administration will study whether the categories suggested by Julin can be established.