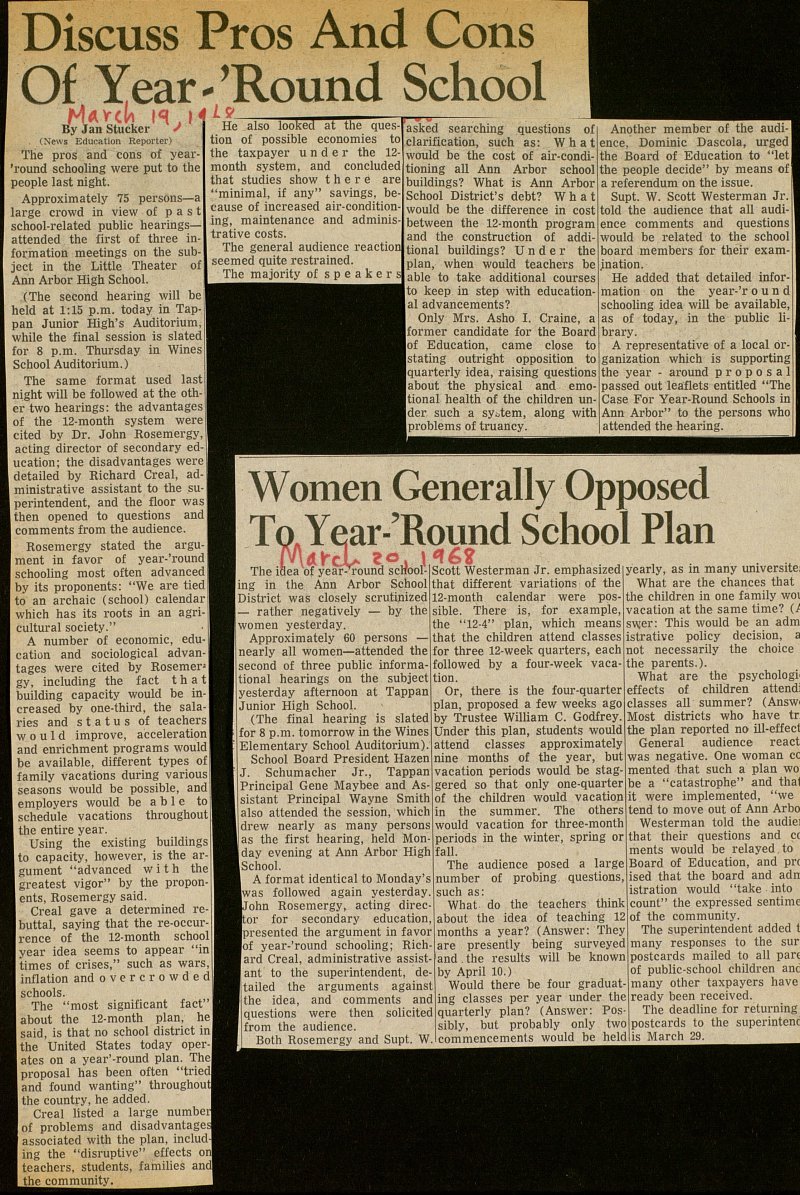 The pros and cons of year'round schooling were put to the people last night. Approximately 75 persons- a large crowd in view of past school-related public hearings- attended the first of three information meetings on the subject in the Little Theater of Ann Arbor High School. (The second hearing will bei held at 1:15 p.m. today in Tappan Junior High's Auditorium, while the final session is slated for 8 p.m. Thursday in Wines School Auditorium.) The same format used last night will be followed at the other two hearings: the advantages of the 12-month system were cited by Dr. John Rosemergy, acting director of secondary education; the disadvantages were detailed by Richard Creal, administrative assistant to the superintendent, and the floor was then opened to questions and comments from the audience. Rosemergy stated the argument in favor of year-'round schooling most often advanced by its proponents: "We are tied to an archaic (school) calendar which has its roots in an agricultural society." A number of economie, education and sociologie al advantages were cited by Rosemer gy, including the f act t h a t building capacity would be increased by one-third, the salaries and status of teachers would improve, acceleration and enrichment programs would be available, different types of family vacations during various seasons would be possible, and employers would be a b 1 e to schedule vacations throughout the entire year. Using the existing buildings1 to capacity, however, is the argument "advanced w i t h the greatest vigor" by the proponents, Rosemergy said. Creal gave a determined rebuttal, saying that the re-occurrence of the 12-month school year idea seems to appear "in times of crises," such as wars, inflation and overcrowded schools. The "most significant fact" about the 12-month plan, he said, is that no school district in the United States today operates on a year'-round plan. The proposal has been often "tried and found wanting" throughouu the country, he added. Creal lísted a large numbeij of problems and disadvantaged associated with the plan, includj ing the "disruptive" effects ora teachers, students, families and the community. _J He also lookecl at the question of possible economies to the taxpayer u n d e r the 12month system, and concluded that studies show t h e r e are "minimal, if any" savings, because of increased air-conditioning, maintenance and administrative costs. The general audience reaction seemed quite restrained. The majority of speakers asked searching questions of clarification, such as: What would be the cost of air-conditioning all Ann Arbor school buildings? What is Ann Arbor School District' s debt? What would be the difference in cost between the 12-month program and the construction of additional buildings? U n d e r the plan, when would teachers be able to take additional courses to keep in step with educational advancements? Only Mrs. Asho I. Craine, a former candidate for the Board lof Education, came close to stating outright opposition to quarterly idea, raising questions about the physical and emotional health of the children under such a sytem, along with problems of truancy. Another member of the audi-l ence, Dominie Dascola, urged the Board of Education to "let the people decide" by means of a referendum on the issue. Supt. W. Scott Westerman Jr. told the audience that all audience comments and questions would be related to the school board members for their examjnation. He added that detailed information on the year-'round schooling idea will be available, as of today, in the public library. A representative of a local órganization which is supporting the year - around proposal passed out leaflets entitled "The Case For Year-Round Schools in Ann Arbor" to the persons who attended the hearing.