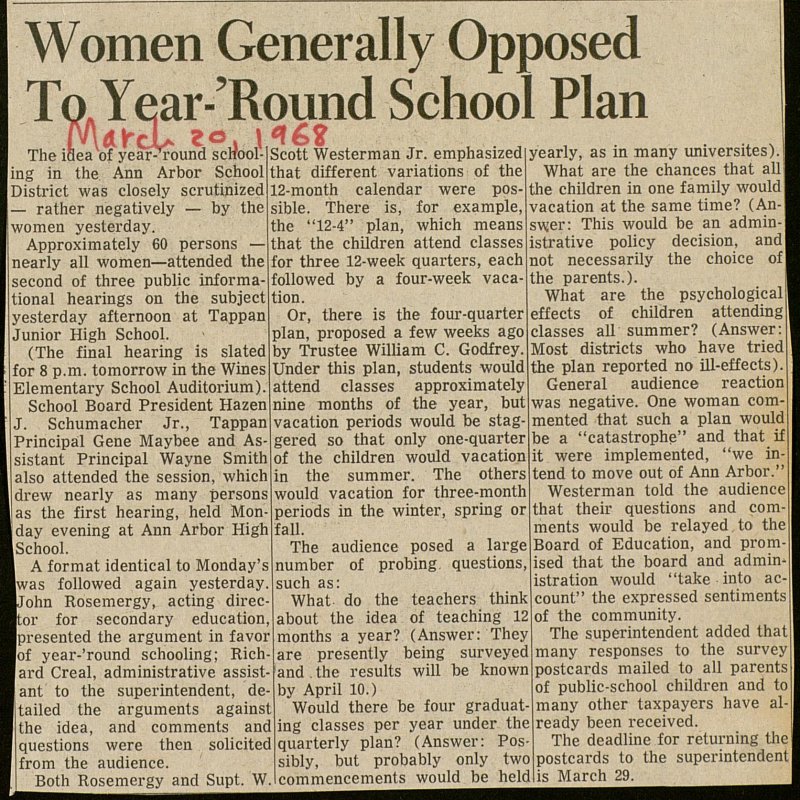 The iaea of round sclfooling in the Ann Arbor School District was closely scrutinized - rather negatively - by the vromen yesterday. Approximately 60 persons - nearly all women- attended the second of three public informational hearings On the subject yesterday afternoon at Tappan Junior High School. (The final hearing is slated for 8 p.m. tomorrow in the Wines Elementary School Auditorium). School Board President Hazen J. Schumacher Jr., Tappan Principal Gene Maybee and Assistant Principal Wayne Smith also attended the session, which drew nearly as many persons as the first hearing, held Monday evening at Ann Arbor High ISchool. A format identical to Monday s was followed again yesterday. John Rosemergy, acting director for secondary education, Ipresented the argument in favor of year-'round schooling; Richard Creal, administrative assistant to the superintendent, de tailed the arguments agains the idea, and comments anc questions were then solicitec from the audience. Both Rosemergy and Supt. W Scott Westerman Jr. emphasized hat different variations of the 2-month calendar were posible. There is, for example, ;he "12-4" plan, which means hat the children attend classes or three 12-week quarters, each 'ollowed by a four-week vacaion. Or, there is the four-quarter plan, proposed a few weeks ago y Trustee William C. Godfrey. Jnder this plan, students would attend classes approximately nine months of the year, but vacation periods would be staggered so that only one-quarter of the children would vacation in the summer. The others would vacation for three-month periods in the winter, spring or f all. The audience posed a large number of probing questions, such as: What do the teachers think about the idea of teaching 12 months a year? (Answer: They are presently being surveyec and . the results will be known by April 10.) Would there be four graduat ing classes per year under the quarterly plan? (Answer: Pos sibly, but probably only two commencements would be hek yearly, as in many universites).! What are the chances that allí the children in one family would I vacation at the same time? (An-J vier: This would be an admin-l strative policy decisión, andl Dot necessarily the choice ofl he parents.). What are the psychological effects of children attending classes all summer? (Answer: Most districts who have tried he plan reported no ill-effects). General audience reaction was negative. One woman commented that such a plan would )e a "catastrophe" and that if t were implemented, "we in;end to move out of Ann Arbor." Westerman told the audience that their questions and comments would be relayed to the Board of Education, and promised that the board and administration would "take into account" the expressed sentiments of the community. The superintendent added that many responses to the survey postcards mailed to all parents of public-school children and to many other taxpayers have already been received. The deadline for returning the postcards to the superintendent is March 29.