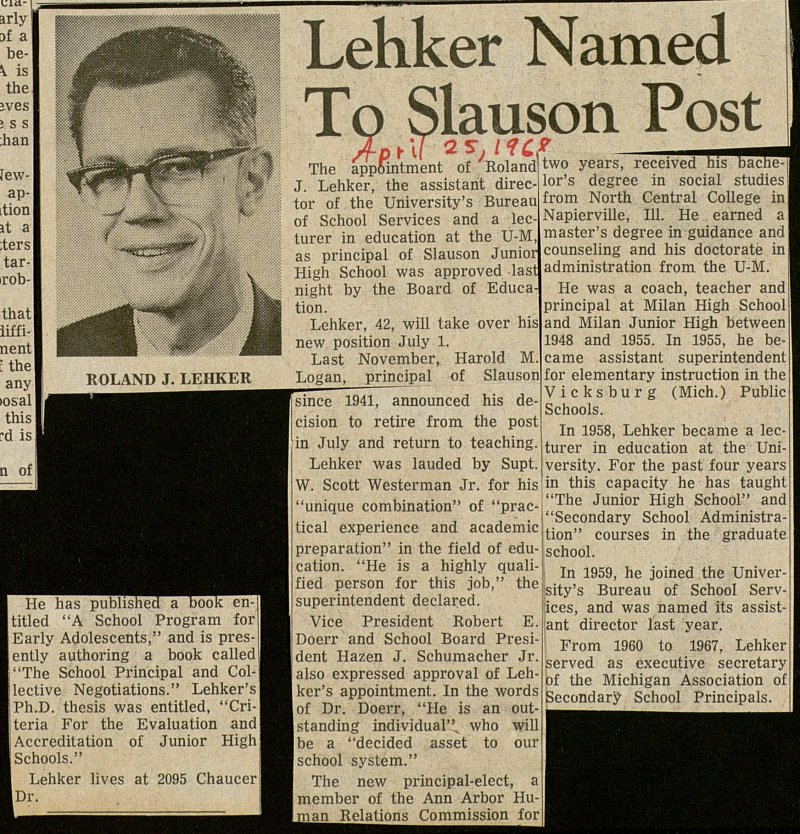 The appöintment of Roland J. Lehker, the assistant director of the University's Bureau of School Services and a leeturer in education at the U-M, as principal of Slauson Junior High School was approved last night by the Board of Education. Lehker, 42, will take over his new position July 1. Last November, Harold M. Logan, principal of Slauson since 1941, announced his decisión to retire from the post in July and return to teaching. Lehker was lauded by Supt. W. Scott Westerman Jr. for his "unique combination" of "practical experience and academie preparation" in the field of education. "He is a highly qualified person for this job," the! superintendent declared. Vice President Robert E. Doerr and School Board President Hazen J. Schumacher Jr. also expressed approval of Lehker's appointment. In the words of Dr. Doerr, "He is an outstanding individual" who will be a "decided asset to our school system." The new principal-elect, a member of the Ann Arbor Human Relations Commission for two years, received nis 1 lor's degree in social studies from North Central College in Napierville, 111. He earned a master's degree in guidance and counseling and his doctórate in administration from the U-M. He was a coach, teacher and principal at Milan High School and Milan Junior High between 1948 and 1955. In 1955, he became assistant superintendent for elementary instruction in the Vicksburg (Mich.) Public Schools. In 1958, Lehker became a lecturer in education at the University. For the past four years in this capacity he has taught "The Junior High School" and "Secondary School Administration" courses in the gradúate school. In 1959, he joiíied the University's Bureau of School Services, and was named its assistant director last year. ! From 1960 to 1967, Lehker served as executive secretary of the Michigan Association of Secondary School Principáis. He has published a book entitled "A School Program for Early Adolescents," and is presently authoring a book called "The School Principal and 1 lective Negotiations." Lehker's [Ph.D. thesis was entitled, "Criteria For the Evaluation and Accreditation of Junior High Schools." Lehker lives at 2095 Chaucer lür.