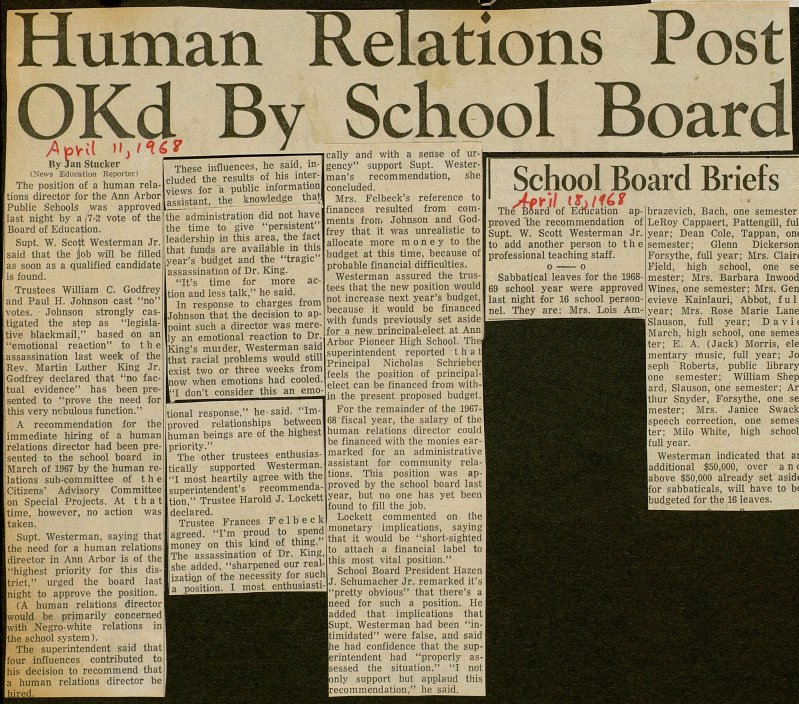 The position of a human relations director for the Ann Arbor Public Schools was approved last night by a 7-2 vote of the Board of Education. Supt. W. Scojft Westerman Jr. said that the job will be filled as soon as a qualified candidate is found. Trustees William C. Godfrey and Paul H. Johnson cast "no" votes. Johnson strongly castigated the step as "legislative blackmail," based on an "emotional reaction" to the assassination last week of the Rev. Martin Luther King Jr. Godfrey declared that "no factual evidence" has been presented to "prove the need for this very nobulous function." A recommendation for the immediate hiring of a human relations director had been presented to the school board in March of 1967 by the human relations sub-committee of the Citizens' Advisory Committee on Special Projects. At that time, however, no action was taken. Supt. Westerman, saying that the need for a human relations director in Ann Arbor is of the "highest priority for this district," urged the board last night to approve the position. (A human relations director would be primarily concerned with Negro-white relations in the school system). The superintendent said that four influences contributed to his decisión to recommend that a human relations director be hired. These influences, he said, inluded the results of his interviews for a public information [assistant, the knowledge that [ie administration did not have he time to give "persistent" eadership in this area, the fact that funds are available in this year's budget and the "tragic" assassination of Dr. King. "It's time for more ación and less talk," he said. In response to charges from Johnson that the decisión to appoint such a director was merely an emotional reaction to Dr. King's murder, Westerman said that racial problems would still exist two or three weeks from Dow when emotions had cpoled. 'I don't consider this an ional response," he-said. "Improved relationships between íuman beings are of the highest priority." The other trustees enthusiastically supported Westerman. "I most heartily agree with the superintendent' s recommendation," Trustee Harold J. Lockett declared. Trustee Francés Felbeck agreed. "I'm proud to spenc money on this kind of thing.' The assassination of Dr. King she added, "sharpened our real ization of the necessity for such a position. I most cnthusiasti cally and with a sense of urgency" support Supt. Westerman's recommendation, she concluded. Mrs. Felbeck's reference to finances resulted from comments from Johnson and Godfrey that it was unrealistic to allocate more m o n e y to the budget at this time, because of probable financial difficulties. Westerman assured the trustees that the new position would not increase next year's budget, because it would be financed with funds previously set aside for a new principal-elect at Ann Árbor Pioneer High School. Thei superintendent reported t h a ti Principal Nicholas Schrieber :eels the position of principal-] elect can be financed from within the present propösed budget. For the remainder of the 1967-1 38 fiscal year, the salary of the tiuman relations director could be financed with the monies earmarked for an administrative I assistant for community relations. This position was approved by the school board last year, but no one has yet been found to fill the job. Lockett commehted on the monetary implications, saying that it would be "short-sighted to attach a financial label to this most vital position." School Board President Hazen J. Schumacher Jr. remarked it's "pretty obvious" that there's a need for such a position. He added that iraplications that Supt. Westerman had been "intimidated" were false, and said pe had confidence that the superintendent had "properly assessed the situation." "I not pnly support but applaud this tecommendation," he said.