School Board Makes Some Changes 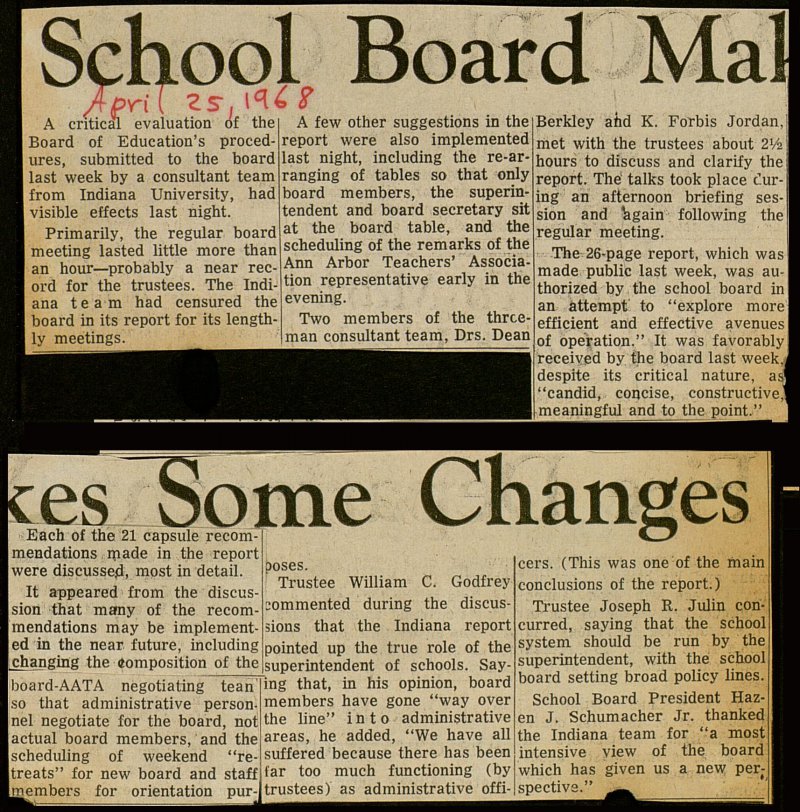 A critical evaluation of the Board of Education's procedures, submitted to the board last week by a consultant team from Indiana University, had visible effects last night. Primarily, the regular board meeting lasted little more than an hour- probably a near record for the trustees. The Indiana team had censured the board in its report for its lengthly meetings. A few other suggestions in the report were also implemented last night, including the re-arranging of tables so that only board members, the superintendent and board secretary sit at the board table, and the scheduling of the remarks of the Ann Arbor Teachers' Association representative early in the evening. Two members of the thrceman consultant team, Drs. Dean Berkley afid K. Foïbis Jordán, j met with the trustees about 2Vèj hours to discuss and clarify the report. The talks took place uring an afternoon briefing session and gain following the regular meeting. The 26-page report, which was made public last week, was authorized by the school board in an attempt to "explore more efficiënt and effective avenues of opeyation." It was favorably received by the board last week,j despite its critical nature, as] "candid, concise, constructive, meaningful and to the point." Each of the 21 capsule recommendations made in the report were discussed, most in detail. It appeared from the discussion that many of the recommendations may be implemented in the near future, including changing the omposition of the board-AATA negotiating tean' so that administrative personnel negotiate for the board, not actual board members, and the scheduling of weekend "retreats" for new board and staff members for orientation poses. Trustee William C. Godfrey jommented during the discussions that the Indiana report pointed up the true role of the superintendent of schools. Saying that, in his opinión, board members have gone "way over the line" int o administrative áreas, he added, "We have all suffered because there has been far too much functioning (by trustees) as administrative cers. (This was one of the rïiain conclusions of the report.) Trustee Joseph R. Julin concurred, saying that the school system should be run by the superintendent, with the schoolj board setting broad policy lines. School Board President Hazen J. Schumacher Jr. thanked the Indiana team for "a most intensive view of the board which has given us a new per-J spective." - - - i