Slauson Principal Harold Logan Resigning, To 'go Back To Kids' 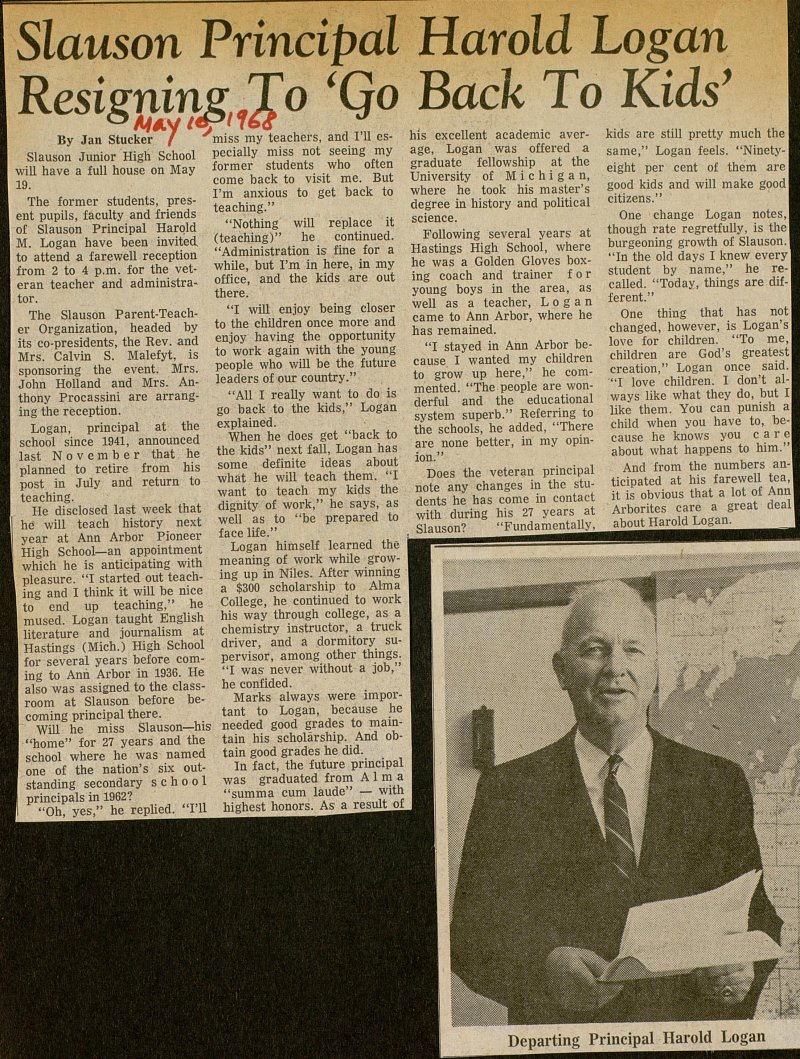 Slauson Junior High School will have a full house on May 19. The former students, present pupils, faculty and friends of Slauson Principal Harold M. Logan have been invited, to attend a farewell reception from 2 to 4 p.m. for the veteran teacher and administrator. The Slauson Parent-Teacher Organization, headed by its co-presidents, the Rev. and Mrs. Calvin S. Malefyt, is sponsoring the event. Mrs. John Holland and Mrs. Anthony Procassini are arranging the reception. Logan, principal at the school since 1941, announced last November that he planned to retire from his post in July and return to teaching. He disclosed last week that he will teach history next year at Ana Arbor Pioneer High School- an appointment which he is anticipating with pleasure. "I started out teaching and I think it will be nice to end up teaching," he mused. Logan taught English literature and journalism at Hastings (Mich.) High School for several years before coming to Ann Arbor in 1936. He also was assigned to the classroom at Slauson before becaming principal there. Will he miss Slauson- his "home" for 27 years and the school where he was named one of the nation's six outstanding secondary school principáis in 1962? "Oh, yes," he replied. 'TU miss my teachers, and I'll especially miss not seeing my former students who often come back to visit me. But I'm anxious to get back to teaching." "Nothing will replace it (teaching)" he continued. "Administration is fine for a while, but I'm in here, in my office, and the kids are out there. "I will enjoy being closer to the children once more and enjoy having the opportunity to work again with the young people who will be the future leaders of our country." "All I really want to do is go back to the kids," Logan explained. When he does get "back to the kids" next fall, Logan has some definite ideas about what he will teach them. "I want to teach my kids the dignity of work," he says, as well as to "be prepared to facelife." Logan himself learned thé meaning of work while growing up in Niles. After winning a $300 scholarship to Alma College, he continued to work his way through college, as a chemistry instructor, a truck driver, and a dormitory supervisor, among other things. "I was never without a job," he confided. Marks always were important to Logan, because he needed good grades to maintain his scholarship. And obtain good grades he did. In fact, the future principal was graduated f rom Alma "summa cum laude" - with highest honor s. As aresulf his excellent academie average, Logan was offered a gradúate fellowship at the University of Michigan, where he took his master's degree in history and politie al science. Following several years at Hastings High School, where he was a Golden Gloves boxing coach and trainer for young boys in the area, as well as a teacher, Logan carne to Ann Arbor, where he has remained. "I stayed in Ann Arbor because I wanted my children to grow up here," he commented. "The people are wonderful and the educational system superb." Referring to the schools, he added, "There are none better, in my opinión." Does the veteran principal note any changes in the students he has come in contact with during his 27 years at Slauson? "Fundamentally, kids are still pretty much thel same," Logan feels. "Ninety-I eight per cent of them arel good kids and will make goodl citizens." One change Logan notes, I though rate regretfully, is thel burgeoning growth of Slauson. I "In the old days I knew every student by name," he recalled. "Today, things are different." One thing that has not changed, however, is Logan's love for children. "To me, children are God's greatest creation," Logan once said. "I love children. I don't always like what they do, but I like them. You can punish a child when you have to, because he knows you car e about what happens to him." And from the numbers anticipated at his farewell tea, it is obvious that a lot of Ann Arborites care a great deal about Harold Logan.