Board Not Well Served By Johnson's Naysaying 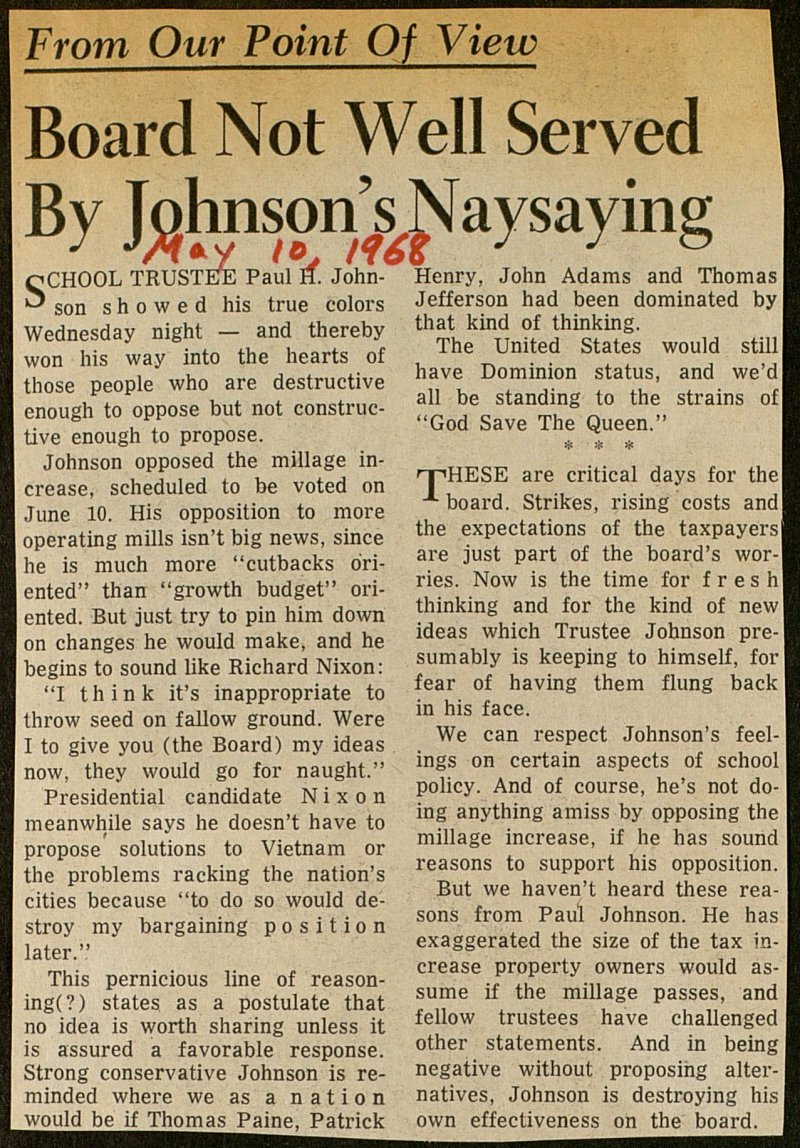 SCHOOL TRUSTKE Paul H. Johnson showed his true colors Wednesday night - and thereby won his way into the hearts of those people who are destructive enough to oppose but not constructive enough to propose. Johnson opposed the millage increase, scheduled to be voted on June 10. His opposition to more operating milis isn't big news, since he is much more "cutbacks óriented" than "growth budget" oriented. But just try to pin him down on changes he would make, and he begins to sound like Richard Nixon: "I think it's inappropriate to throw seed on fallow ground. Were I to give you (the Board) my ideas now, they would go for naught." Presidential candidate Nixon meanwhile says he doesn't have to propose solutions to Vietnam or the problems racking the nation's cities because "to do so would destroy my bargaining p o s i t i o n later." This pernicious line of reasoning(?) states as a postúlate that no idea is worth sharing unless it is assured a favorable response. Strong conservative Johnson is reminded where we as a n a t i o n would be if Thomas Paine, Patrick Henry, John Adams and Thomas Jefferson had been dominated byl that kind of thinking. The United States would still have Dominion status, and we'dl all be standing to the strains of I "God Save The Queen." ' nnHESE are critical days for thel board. Strikes, rising costs andl the expectations of the taxpayersj are just part of the board's wor-j ries. Now is the time for f r e s hl thinking and for the kind of new ideas which Trustee Johnson presumably is keeping to himself, for fear of having them flung back in his face. We can respect Johnson's feelings on certain aspects of school policy. And of course, he's not doing anything amiss by opposing the millage increase, if he has sound reasons to support his opposition. But we haven't heard these reasons from Paul Johnson. He has exaggerated the size of the tax increase property owners would assume if the millage passes, and fellow trustees have challenged other statements. And in being negative without proposihg alternatives, Johnson is destroying his own effectiveness on the board.