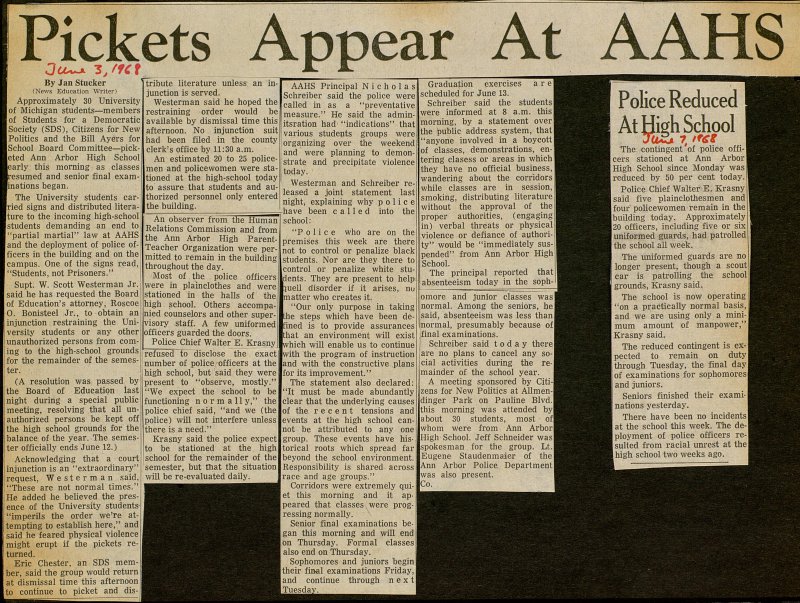 Approximately 30 University of Michigan students - members of Students for a Democratie Society (SDS), Citizens for New Politics and the Bill Ayers for School Board Committee - picketed Ann Arbor High School early this morning as classes pesumed and senior final examinations began. The University students carried signs and distributed literature to the incoming high-school students demanding an end to "partial martial" law at AAHS and the deployment of pólice officers in the building and on the campus. One of the signs read, "Students, not Prisoners." Supt. W. Scott Westerman Jr. said he has requested the Board of Education's attorney, Roscoe O. Bonisteel Jr., to obtain an injunction restraining the University students or any other unauthorized persons from coming to the high-school grounds for the remainder of the semester. CA resolution was passed by the Board of Education last night during a special public meeting, resolving that all unauthorized persons be kept off the high school grounds for the balance of the year. The semester officially ends June 12.) Acknowledging that a court injunction is an "extraordinary" request, Westerman said, "These are not normal times." He added he believed the presence of the University students"imperils the order we're attempting to establish here," and said he feared physical violence might erupt if the pickets returned. Eric Chester, an SDS member, said the group would return at dismissal time this afternoon to continue to picket and tribute literature unless an injunction is served. Westerman said he hoped the restraining order would be available by dismissal time this afternoon. No injunction suit had been filed in the county clerk's office by 11:30 a.m. An estimated 20 to 25 policemen and policewomen were statipned at the high-school today to assure that students and authorized personnel only entered the building. An observer from the Human Relations Commission and from the Ann Arbor High Parent Teacher Organization were permitted to remain in the building throughout the day. Most of the pólice officers were in plaïn clothes and were stationed in the halls of the high school. Others accompanied counselors and other supervisory staff. A few uniformed officers guarded the doors. Pólice Chief Walter E. Krasny refused to disclose the exact number of pólice officers at the high school, but said they were present to "observe, mostly." "We expect the school to be functioning normally," the pólice chief said, "and we (the pólice) will not interfere unless there is a need." Krasny said the pólice expect to be stationed at the high school for the remainder of the semester, but that the situation will be re-evaluated daily. AAHS Principal Nicholas Schreiber said the pólice were called in as a "preveníative measure." He said the adminitsration "indications" that various students groups were organizing over the weekend and were planning to demónstrate and precipitate violence tocjay. Westerman and Schreiber released a joint statement last night, explaining why pólice tiave been called into the school: "Pólice who are on the sremises this week are there not to control or penalize black students. Nor are they there to control or penalize white stulents. They are present to help luell disorder if it arises, nu matter who creates it. "Our only purpose in taking the steps which have been deEined is to provide assurances that an environment will exist which will enable us to continue with the program of instruction and with the constructive plans for its improvement." The statement also declared: 'It must be made abundantly clear that the underlying causes of the recent tensions and events at the high school cannot be attributed to any one roup. These events have his;orical roots which spread far Deyond the school environment. Responsibility is shared across race and age groups." Corridors were extremely quiet this morning and it appeared that classes were progressing normally. Senior final examinations began this morning and will end on Thursday. Formal classes also end on Thursday. Sophomores and juniors begin their fiaal examinations Friday, and continue through next Tuesday. Graduation exercises are scheduled for June 13. Schreiber said the students were informed at 8 a.m. this morning, by a statement over the public address system, that "anyone involved in a boycott of classes, demonstrations, entering clasess or areas in which they have no official business, wandering about the corridors while classes are in session, smoking, distributing literature without the approval of the proper authorities, (engaging in) verbal threats or physical violence or defiance of authority" would be "immediately suspended" from Ann Arbor High School. The principal reported that absenteeism today in the sophomore and Junior classes was normal. Among the seniors, he said, absenteeism was less than normal, presumably because of final examinations. Schreiber said today there are no plans to cancel any social activities during the remainder of the school year. A meeting sponsored by Citizens for New Politics at Allmendinger Park on Pauline Blvd. this morning was attended by about 30 students, most of whom were from Ann Arbor High School. Jeff Schneider was spokesman for the group. Lt. Eugene Staudenmaier of the Ann Arbor Pólice Department was also present. Co.