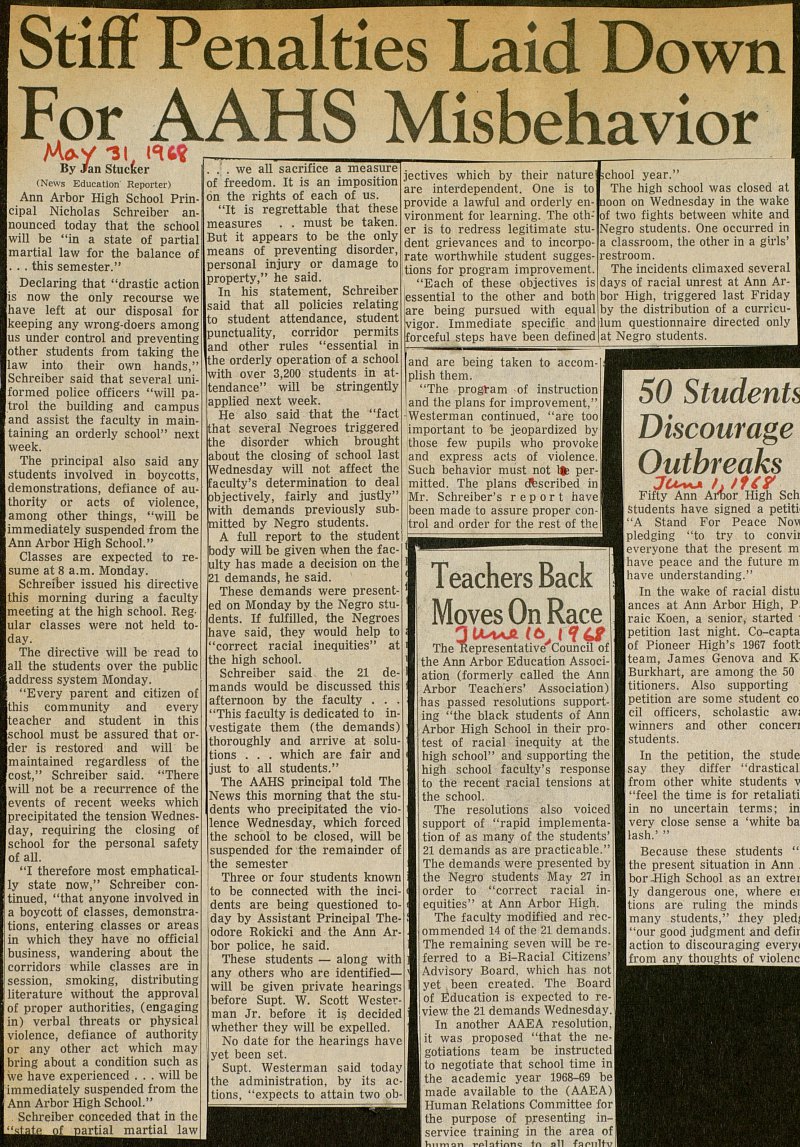 Ann Arbor High School Principal Nicholas Schreiber announced today that the school will be "in a state of partial martial law for the balance of . . . this semester." Declaring that "drastic action is now the only recourse we have left at our disposal for keeping any wrong-doers among us under control and preventing other students from taking the law into their own hands," Schreiber said that several uniformed pólice officers "will patrol the building and campus and assist the faculty in maintaining an orderly school" next week. The principal also said any students in volved in boycotts, demonstrations, defiance of authority or acts of violence, among other things, "will be immediately suspended from the Ann Arbor High School." Classes are expected to resume at 8 a.m. Monday. Schreiber issued his directive this morning during a faculty meeting at the high school. Regular classes were not held today. The directive will be read to all the students over the public address system Monday. "Every parent and citizen of this community and every teacher and student in this school must be assured that order is restored and will be maintained regardless of the cost," Schreiber said. "There will not be a recurrence of the events of recent weeks which precipitated the tensión Wednesday, requiring the closing of school for the personal safety of aU. "I therefore most emphatically state now," Schreiber continued, "that anyone involved in a boycott of classes, demonstrations, entering classes or areas in which they have no official business, wandering about the corridors while classes are in session, smoking, distributing literature without the approval of proper authorities, (engaging in) verbal threats or physical violence, defiance of authority or any other act which may bring about a condition such as we have experienced . . . will be immediately suspended from the Ann Arbor High School." Schreiber conceded that in the Mate)fpartial martial law . . we all sacrifice a measure of freedom. It is an imposition ön the rights of each of us. "It is regrettable that these measures . . must be taken. 3ut it appears to be the only means of preventing disorder, personal injury or damage to jroperty," he said. In his statement, Schreiber said that all policies relating to student attendance, student punctuality, corridor permits and other rules "essential in the orderly operation of a school with over 3,200 students in attendance" will be stringently applied next week. He also said that the "fact that several Negroes triggered the disorder which brought about the closing of school last Wednesday will not affect the Eaculty's determination to deal sbjectively, fairly and justly" with demands previously submitted by Negro students. A f uil report to the student I body will be given when the faculty has made a decisión on the 21 demands, he said. These demands were presented on Monday by the Negro students. If fulfilled, the Negroes have said, they would help to "correct racial inequities" at the high school. Schreiber said the 21 demands would be discussed this afternoon by the faculty . . . "This faculty is dedicated to investígate them (the demands) thoroughly and arrive at solutions . . . which are fair and just to all students." The AAHS principal told The News this morning that the students who precipitated the violence Wednesday, which forced the school to be closed, will be suspended for the remainder of the semester ! Three or four students known to be connected with the incidents are being questioned today by Assistant Principal Theodore Rokicki and the Ann Arbor pólice, he said. These students - along with any others who are identified- will be given private hearings before Supt. W. Scott Westerman Jr. before it is decided whether they will be expelled. No date for the hearings have yet been set. Supt. Westerman said today the administration, by its actions, "expects to attain two jectives which by their nature are interdependent. One is to provide a lawful and orderly environment for learning. The oth-' er is to redress legitímate student grievances and to incorpórate worthwhile student suggestions for program improvement. "Each of these objectives is essential to the other and both are being pursued with equal vigor. Immediate specific and forceful steps have been defined and are being taken to accomplish them. "The program of instruction and the plans for improvement," -Westerman continued, "are too important to be jeopardized by those few pupils who provoke and express acts of violence. Such behavior must not Ife permitted. The plans dfescribed in Mr. Schreiber's report have been made to assure proper oonjtrol and order for the rest of the school year." The high school was closed at ïoon on Wednesday in the wake of two fights between white and egro students. One occurred in a classroom, the other in a girls' restroom. The incidents climaxed several days of racial unrest at Ann Ar3or High, triggered last Friday ay the distribution of a curriculum questionnaire directed only at Negro students.