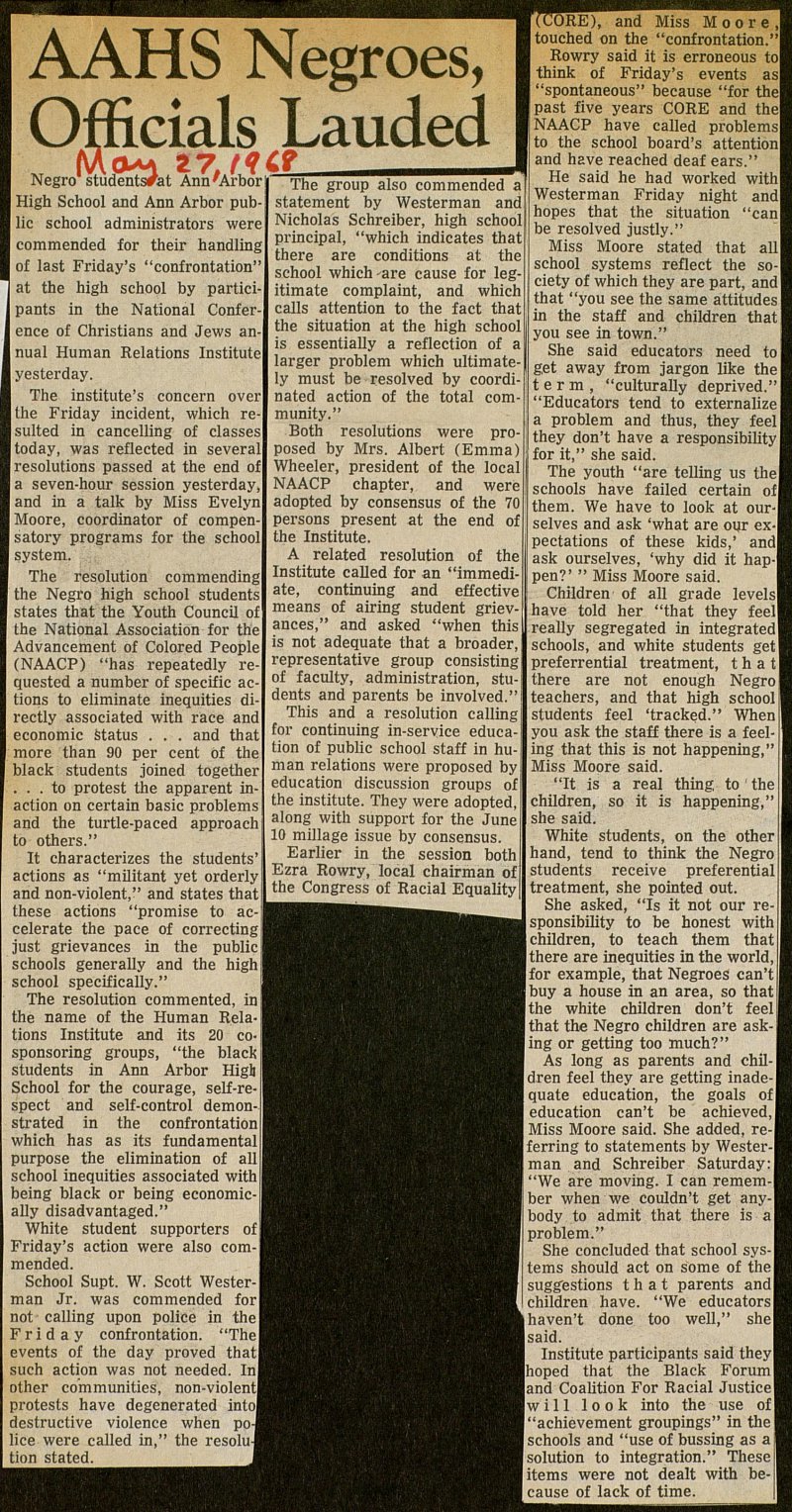 Negro studentsrat Ann'Arbor High School and Arm Arbor public school administrators were commended for their handling of last Friday's "confrontation" at the high school by participants in the National Conference of Christians and Jews annual Human Relations Institute yesterday. The institute's concern over the Friday incident, which resulted in cancelling of classes today, was reflected in several resolutions passed at the end of a seven-hour session yesterday, and in a talk by Miss Evelyn Moore, coördinator of compensatory programs for the school system. The resolution commending the Negro high school students states that the Youth Council of the National Association for the Advancement of Colored People (NAACP) "has repeatedly requested a number of specific actions to elimínate inequities directly associated with race and economie status . . . and that more than 90 per cent óf the black students joined together . . . to protest the apparent inaction on certain basic problems and the turtle-paced approach to others." It characterizes the students' actions as "militant yet orderly and violent," and states that these actions "promise to ac-l celerate the pace of correcting just grievances in the public I schools generally and the high school specifically." The resolution commented, in I the name of the Human Rela-I tions Institute and its 20 cosponsoring groups, "the black students in Ann Arbor Higi School for the courage, self -respect and self-control demonstrated in the confrontation which has as its fundamental purpose the elimination of all school inequities associated with being black or being economically disadvantaged." White student supporters ofl Friday 's action were also com-j mended. School Supt. W. Scott Wester-j man Jr. was commended forl not calling upon pólice in the I Friday confrontation. "Thel events of the day proved thatl such action was not needed. Inl other communities, non-violentl protests have degenerated intol destructive violence when po-I lice were called in," the resolu-1 tion stated. 1 The group also commended a statement by Westerman and Nicholas Schreiber, high school principal, "which indicates that there are conditions at the school which 'are cause for legitímate complaint, and which calis attention to the fact that the situation at the high school is essentially a reflection of a larger problem which ultimately must be resolved by coordinated action of the total community." Both resolutions were proposed by Mrs. Albert (Emma) Wheeler, president of the local NAACP chapter, and were adopted by consensus of the 70 persons present at the end of the Institute. A related resolution of the Institute called for an "immediate, continuing and effective means of airing student grievances," and asked "when this is not adequate that a broader, representative group consisting of faculty, administration, students and parents be involved." This and a resolution calling for continuing in-service education of public school staff in human relations were proposed by education discussion groups of the institute. They were adopted, along with support for the June 10 millage issue by consensus. Earlier in the session both Ezra Rowry, local chairman of the Congress of Racial Equality [(CORE), and Miss Moor e, I touched on the "confrontation." Rowry said it is erroneous to think of Friday's events as "spontaneous" because "for the past five years CORE and the NAACP have called problems to the school board's attention and have reached deaf ears." He said he had worked with Westerman Friday night and hopes that the situation "can be resolved justly." Miss Moore stated that all school systems reflect the society of which they are part, and that "you see the same attitudes in the staff and children that you see in town." She said educators need to get away from jargon like the term, "culturally deprived." "Educators tend to externalize a problem and thus, they feel they don't have a responsibility for it," she said. The youth "are telling us thel schools have failed certain ofl them. We have to look at our-l selves and ask 'what are our ex-I pectations of these kids,' andl ask ourselves, 'why did it hap-l pen?' " Miss Moore said. Children of all grade levelsl have told her "that they feell really segregated in integratedl schools, and white students getl pref errential treatment, t h a 1 1 there are not enough Negro] teachers, and that high school! students feel 'tracked." When you ask the staff there is a feeling that this is not happening," Miss Moore said. "It is a real thing to ' the children, so it is happening," she said. White students, on the other hand, tend to think the Negro students receive preferential treatment, she pointed out. She asked, "Is it not our responsibility to be honest with children, to teaeh them that there are inequities in the world, for example, that Negroes can't buy a house in an área, so that the white children don't feel that the Negro children are ask'ing or getting too much?" As long as parents and children feel they are getting inadequate education, the goals of education can't be achieved,j Miss Moore said. She added, referring to statements by Westerman and Schreiber Saturday: "We are moving. I can remember when we couldn't get anybody to admit that there is a problem." { She concluded that school systems should act on some of the suggestions that parents and children have. "We educators haven't done too well," she said. Institute participants said they jhoped that the Black Forum and Coalition For Racial Justice Iwill look into the use of "achievement groupings" in the schools and "use of bussing as a solution to integration." These items were not dealt with because of lack of time.