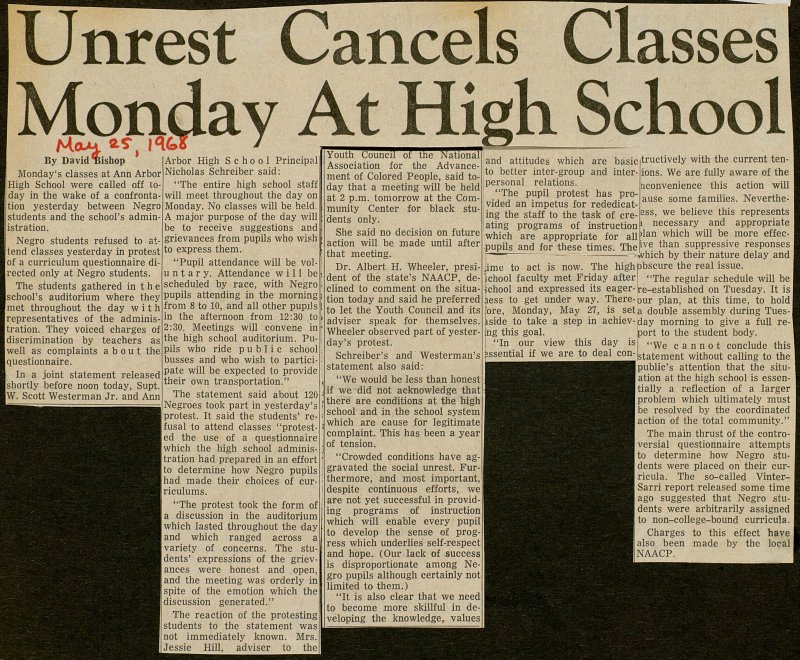 Monday's classes at Ann Arbor High School were called off today in the wake of a confrontation yesterday between Negro students and the school's administration. Negro students refused to attend classes yesterday in protest of a curriculum questionnaire directed only at Negro students. The students gathered in the school's auditorium where they met throughout the day with representatives of the administration. They voiced charges of discrimination by teachers as well as complaints a b o u t the questionnaire. In a joint statement released shortly before noon today, Supt. W. Scott Westerman Jr. and Ann Arbor High School Principal Nicholas Schreiber said: "The entire high school staff will meet throughout the day on Monday. No classes will be held. A major purpose of the day will be to receive suggestions and grievances from pupils who wish to express them. "Pupil attendance will be voluntary. Attendance will be scheduled by race, with Negro pupils attending in the morning from 8 to 10, and all other pupils in the afternoon from 12:30 to 2:30. Meetings will convene in the high school auditorium. Pupils who ride public school buses and who wish to participate will be expected to provide their own transportation." The statement said about 120 Negroes took part in yesterday's protest. It said the students' refusal to attend classes "protested the use of a questionnaire which the high school administration had prepared in an effort to determine how Negro pupils had made their choices of curriculum. "The protest took the form of a discussion in the auditorium which lasted throughout the day and which ranged across a variety of concerns. The students' expressions of the grievances were honest and open, and the meeting was orderly in spite of the emotion which the discussion generated." The reaction of the protesting students to the statement was not immediately known. Mrs. Jessie Hill, adviser to the Youth Council of the National Association for the Advancement of Colored People, said today that a meeting will be held at 2 p.m. tomorrow at the Community Center for black students only. She said no decision on future action will be made until after that meeting. Dr. Albert H. Wheeler, president of the state's NAACP, declined to comment on the situation today and said he preferred to let the Youth Council and its adviser speak for themselves. Wheeler observed part of yesterday's protest. Schreiber's and Westerman's statement also said: "We would be less than honest if we did not acknowledge that there are conditions at the high school and in the school system which are cause for legitimate complaint. This has been a year of tension. "Crowded conditions have aggravated the social unrest. Furthermore, and most important, despite continuous efforts, we are not yet successful in providing programs of instruction which will enable every pupil to develop the sense of progress which underlies self-respect and hope. (Our lack of success is disproportionate among Negro pupils although certainly not limited to them.) "It is also clear that we need to become more skillful in developing the knowledge, values and attitudes which are basic to better inter-group and interpersonal relations. "The pupil protest has provided an impetus for rededicating the staff to the task of creating programs of instruction which are appropriate for all pupils and for these times. The time to act is now. The high school faculty met Friday after school and expressed its eagerness to get under way. Therefore, Monday, May 27, is set aside to take a step in achieving this goal. "In our view this day is essential if we are to deal constructively with the current tensions. We are fully aware of the inconvenience this action will cause some families. Nevertheless, we believe this represents a necessary and appropriate plan which will be more effective than suppressive responses which by their nature delay and obscure the real issue. "The regular schedule will be re-established on Tuesday. It is our plan, at this time, to hold a double assembly during Tuesday morning to give a full report to the student body. "We cannot conclude this statement without calling to the public's attention that the situation at the high school is essentially a reflection of a larger problem which ultimately must be resolved by the coordinated action of the total community." The main thrust of the controversial questionnaire attempts to determine how Negro students were placed on their curricula. The so-called Vinter-Sarri report released some time ago suggested that Negro students were arbitrarily assigned to non-college-bound curricula. Charges to this effect have also been made by the local NAACP.