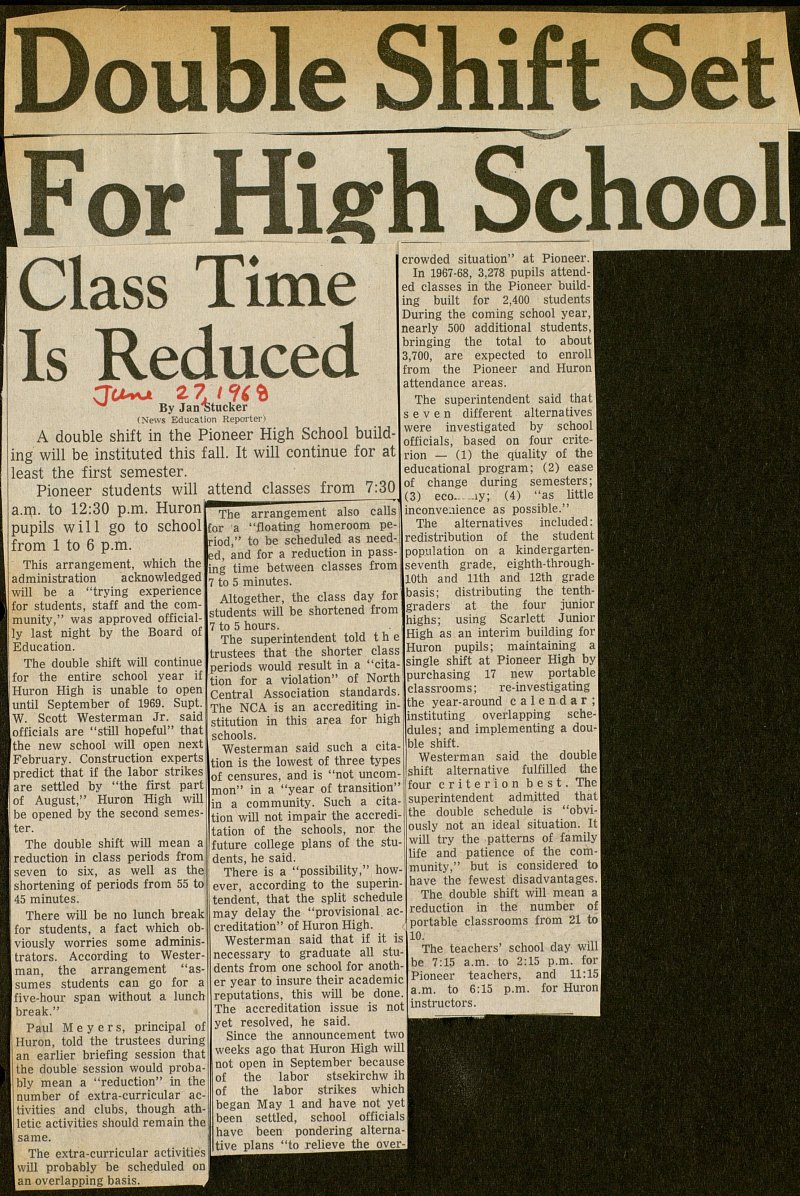 A doublé shift in the Pioneer High School building will be instituted this f all. It will continue for at least the first semester. Pioneer students will attend classes from 7:30 a.m. to 12:30 p.m. Huron pupils will go to school from 1 to 6 p.m. This arrangement, which the administration acknowledged will be a "trying experience for students, staff and the community," was approved officially last night by the Board of Education. The doublé shift will continue for the entire school year if Huron High is unable to open until September of 1969. Supt. W. Scott Westerman Jr. said [officials are "still hopeful" that the new school will open next [February. Construction experts predict that if the labor strikes are settled by "the first part of August," Huron High will be opened by the second semester. The doublé shift will mean a reduction in class periods from seven to six, as well as the shortening of periods from 55 to 45 minutes. There will be no lunch break for students, a f act which obviously worries some administrators. According to Westerman, the arrangement "assumes students can go for a five-hour span without a lunch break." Paul Meyers, principal of Huron, told the trustees during an earlier briefing session that the doublé session would probably mean a "reduction" in the number of extra-curricular activities and clubs, though athletic activities should remain the same. The extra-curricular activities will probably be scheduled on an overlapping basis. t The arrangement also caüs or a "floating homeroom peiod," to be scheduled as needd, and for a reduction in passng time between classes from to 5 minutes. I Altogether, the class day for 1 tudents will be shortened from j to 5 hours. . 1 The superintendent told thej rustees that the shorter class periods would result in a "citaion for a violation" of North; Central Association standards. The NCA is an accrediting institution in this area for high schools. Westerman said such a citation is the lowest of three types of censures, and is "not uncommon" in a "year of transition" n a community. Such a citaion will not impair the accredi;ation of the schools, nor the 'uture college plans of the students, he said. There is a "possibility," however, according to the superintendent, that the split schedule may delay the "provisional accreditation" of Huron High. Westerman said that if it is necessary to gradúate all students from one school for another year to insure their academie reputations, this will be done. The accreditation issue is not yet resolved, he said. Since the announcement two weeks ago that Huron High will not open in September because of the labor stsekirchw ih of the labor strikes which began May 1 and have not yet been settled, school officials have been pondering alternative plans "to relieve the crowded situation" at Pioneer. I In 1967-68, 3,278 pupils attend-l ;d classes in the Pioneer build-l ing built for 2,400 studentsl During the coming school yearj nearly 500 additional students.l bringing the total to aboutl 3,700, are expected to enrolll from the Pioneer and Huronl attendance areas. The superintendent said that s e v e n different alterna tives were investigated by school officials, based on four criterion - (1) the quality of the educational program; (2) ease of change during semesters; (3) eco ïy; (4) "as little inconvenience as possible." The alternatives included: redistribution of the student pop.ulation on a kindergartenseventh grade, eighth-throughllOth and llth and 12th grade basis; distributing the tenthgraders at the four junior highs; using Scarlett Junior High as an interim building for Huron pupils; maintaining a single shift at Pioneer High by purchasing 17 new portable classrooms; re-investigating the year-around calendar; instituting overlapping schedules; and implementing a ble shift. Westerman said the doublé shift alternative fulfilled the four criterion best. The superintendent admitted that the doublé schedule is "obviously not an ideal situation. It will try the patterns of family life and patience of the community," but is considered to have the fewest disadvantages. The doublé shift will mean a reduction in the number of portable classrooms from 21 to 10. The teachers' school day will be 7:15 a.m. to 2:15 p.m. for Pioneer teachers, and 11:15 a.m. to 6:15 p.m. for Huron instructors.