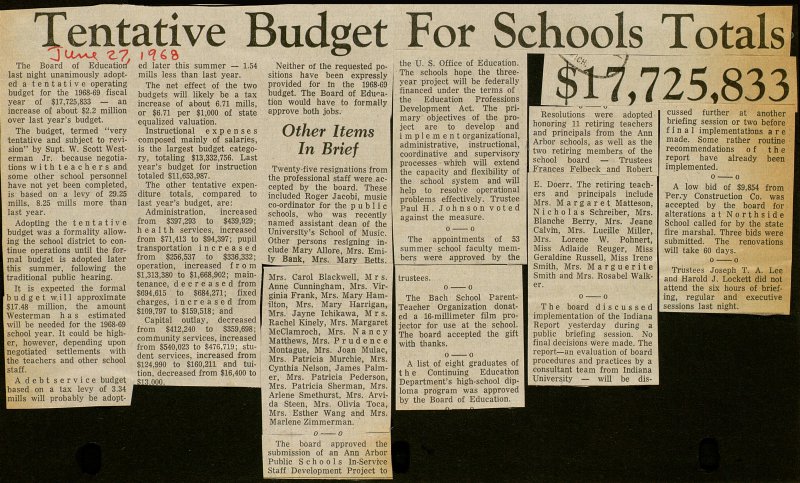 The Board of Educatiorr last uight unanimously adopted a tentative operating budget for the 1968-69 fiscal year of $17,725,833 - an increase of about $2.2 million over last year's budget. The budget, termed "very tentative and subject to revisión" by Supt. W. Scott ■Westerman Jr. because negotiations with teachers and some other school personnel have not yet been completed, is based on a levy of 29.25 milis, 8.25 milis more than last year. Adopting the tentative budget was a formality allowing the school district tO' continue operations until the formal budget is adopted later this summer, following the traditional public hearing. It is expected the formal budget w.ill approximate $17.48 million, the amount Westerman has estimated will be needed for the 1968-69 school year. It could be higher, however, depending upon negotiated settlements with the teachers and other school i staf f. I Adebtservice budget based on a tax levy of 3.34 milis will probably be ed later this summer - 1.54 milis less than last year. The net effect of the two budgets will likely be a tax increase of about 6.71 milis, or $6.71 per $1,000 of state equalized valuation. Instructional expenses composed mainly of salaries, is the largest budget category, totaling $13,332,756. Last year's budget for instruction totaled $11,653,987. The other tentative expenditure totals, campared to last year's budget, are: Administration, increased from $397,293 to $439,929; h e a 1 1 h services, increased from $71,413 to $94,397; pupil transportation increased from $256,537 to $336,332; operation, increased from $1,313,380 to $1,668,902; maintenance, decreased from $694,615 to $684,271; fixed charges, increased from $109,797 to $159,518; and Capital outlay, decreased from $412,240 to $359,698; community services, increased from $540,023 to $476,719; student services, increased from $124,990 to $160,211 and tuition, decreased from $16,400 to . 813.000. Neither oí the requested positions have been expressly provided for In the 1968-69 budget. The Board of Eduoation would have to formally approve both jobs. Other Items In Brief Twenty-five resignations from the professional staff were accepted by the board. These included Roger Jacobi, music co-ordinator for the public schools, who was recently named assistant dean of the Universlty's School of Music. Other persons resigning include Mary Allore, Mrs. Emily Bank, Mrs. Mary Betts. Mrs. Carol Blackwell, Mrs. Anne Cunningham, Mrs. Virginia Frank, Mrs. Mary Hamilton, Mrs. Mary Harrigan, Mrs. Jayne Ichikawa, Mrs. Rachel Kinely, Mrs. Margaret McClamroch, Mrs. N a n c y Matthews, Mrs. Prudence Montague, Mrs. Joan Mulac, Mrs. Patricia Murchie, Mrs. Cynthia Nelson, James Palmer, Mrs. Patricia Pederson, Mrs. Patricia Sherman, Mrs. Arlene Smethurst, Mrs. Arvida Steen, Mrs. Olivia Toca, Mrs. Esther Wang and Mrs. Mariene Zimmerman. o o The board approved the submission of an Ann Arbor Public Schools In-Service Staff Development Project to the U. S. Office of Education. The schools hope the threeyear project will be federally financed under the terms of the Education Professions Development Act. The primary objectives of the project are to deveíop and implement organizational, administrative, instructional, coordinative and supervisory processes which wiÜ extend the capacity and flexibility of the school system and will help to resolve operational problems effectively. Trustee Paul H. Johnson voted against the measure. o o The appointments of 53 summer school faculty members were approved by the trustees. o o The Bach School ParentTeacher Organization donated a 16-millimeter film projector for use at the school. The board accepted the gift with thanks. o o A list of eight graduates of the Continuing Education Department's high-school diploma program was approved by the Board of Education. Resolutions were adopted honoring 11 retiring teachers and principáis from the Ann Arbor schools, as well as the two retiring members of the school board - Trustees Francés Felbeckand Robert E. Doerr. The retiring teachers and principáis include Mrs. Margare t Matteson, N i c h o 1 a s Schreiber, Mrs. Blanche Berry, Mrs. Jeane Calvin, Mrs. Lucüle Miller, Mrs. Lorene W. Pohnert, Miss Adlaide Reuger, Miss Geraldine Russell, Miss Irene Smith, Mrs. Marguerite Smith and Mrs. Rosabel Walker. o o The board discussed implementation of the Indiana Report yesterday during a public briefing session. No final decisions were made. The report - an evaluation of board procedures and practices by a consultant team from Indiana University - will be cussed further at another briefing session or two before final implementations are made. Some rather routine recommendations of the report have already been implemented. o o A low bid of $9,854 from Per.y Construction Co. was accepted by the board for alterations at Northside School called for by the state fire marshal. Three bids were submitted. The renovations will take 60 days. o o Trustees Joseph T. A. Lee and Harold J. Lockett did not attend the six hours of briefing, regular and executive sessions last night.