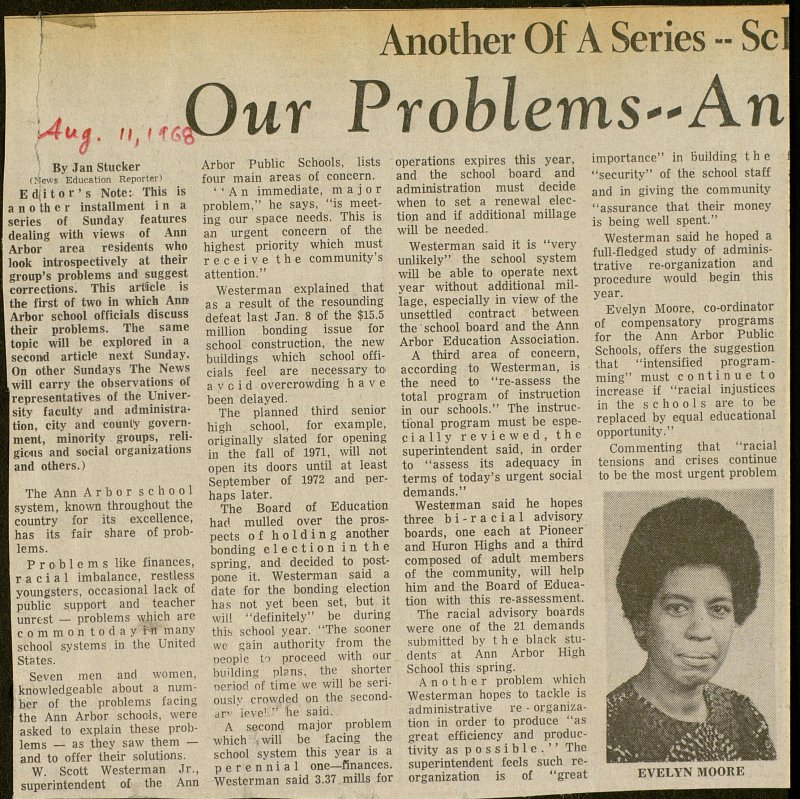 Edjitor ' s Note: This is a n o th e r installment i n a series of Sunday features dealing with views of Ann Arbor area residents who look introspectively at their group's problems and suggest corrections; This arlficle is the first of two in which Ann Arbor school officials discuss their problems. The same topic will be explored in a second article next Sunday. On other Sundays The News will carry the observations of representatives of the University faculty and administration, city and counry government, minority groups, religieus and social organizations and others.) The Ann Arbor school system, known throughout the :ountry for its excellence, lias its fair share of problems. Problems like finances, racial imbalance, restless youngsters, occasional lack of public support and teacher unrcst _ problems which are c o m m o n t o d a y i-tt many school systems.in the United States. Seven men and womcn, knowledgeable about a number of the problems facing the Ann Arbor schools, were asked to explain these problems _ as they saw them - and to offer their solutions. W. Scott Westerman Jr., superintendent of the Ann Arbor Public Schools, lists - four main áreas of concern. ' ' A n immediate, major problem," he says, "is meeting our space needs. This is an urgent concern of the highest priority which must receive the community's attention." Westerman explained that as a result of the resounding defeat last Jan. 8 of the $15.5 million bonding issue for school construction, the new buildings which school officials feel are necessary to a y c i d overcrowding have been delayed. The planned third senior high school, for example, oriainally slated for opening in "the f all of 1971, will not open its doors until at least September of 1972 and perhaps later. The Board of Education had muiled over the prospects of holding another bonding election in the spring, and decided to postpone it. Westerman said a date for the bonding election has not yet been set, but it wil! "definitely" be during thi.s school year. "The sconer wc gain authority from the people tó proceed with our building plans, the shorter oeriod of time we will be seriously crowded on the secondar1' ieve1." lie said. A second major problem which will be facing the school system this year is a perennial one- finances. Westerman said 3.37 milis for operations expires this year, and the school board and administration must decide when to set a renewal election and if additional millage will be needed. Westerman said it is "very unlikely" the school system will be able to opérate next year without additional millage, especially in view of the unsettled contract between the ' school board and the Ann Arbor Education Association. A third area of concern, according to Westerman, is the need to "re-assess the total program of instruction in our schools." The instructional program must be espepially reviewed, the superintendent said, in order to "assess its adequacy in terms of today's urgent social demands." Westeuman said he hopes three b i - r a c i a I advisory boards, one each at Pioneer and Hurón Highs and a third composed of adult members of the community, will help him and the Board of Education with this re-assessment. The racial advisory boards were one of the 21 demands submitted by t h e black students at Ann Arbor High School this spring. A n o t h e r problem which Westerman hopes to tackle is administrative re - organization in order to produce "as great efficiency and productivity as possible.'1 The superintendent feels such reorganization is of "great importance" in building the "security" of the school staff and in giving the community "assurance that their money is being well spent." Westerman said he hoped a full-fledged study of administrative re-organization and procedure would begin this year. Evelyn Moore, co-ordinator of compensatory programs for the Ann Arbor Public Schools, offers the suggestion that "intensified programming" must continue to increase if "racial injustices in the schools are to be replaced by equal educational opportunity." Commenting that "racial tensions and crises continue to be the most urgent problem