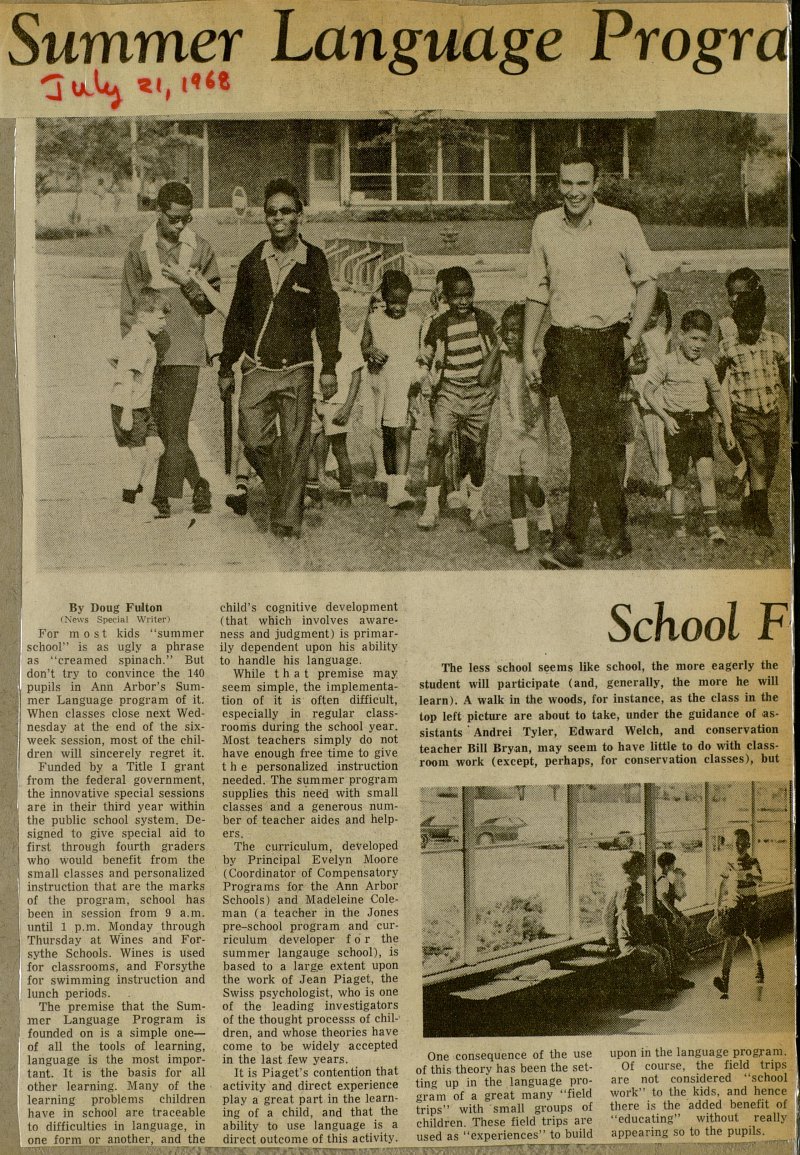 For most kids "summer school" is as ugly a phrase as "creamed spinach." But don't try to convince the 140 pupils in Ann Arbor's Summer Language program of it. When classes close next Wednesday at the end of the sixweek session, most of the children will sineerely regret it. Funded by a Title I grant from the federal government, the innovative special sessions are in their third year within the public school system. Designed to give special aid to first through fourth graders who would benefit from the small classes and personalized instruction that are the marks of the program, school has been in session from 9 a.m. until 1 p.m. Monday through Thursday at Wines and Forsythe Schools. Wines is used for classrooms, and Forsythe for swimming instruction and lunch periods. The premise that the Summer Language Program is founded on is a simple one- of all the tools of learning, language is the most important. It is the basis for all other learning. Many of the learning problems children have in school are traceable lo difficulties in language, in one form or another, and the child's cognitive development (that which involves awareness and judgment) is primarily dependent upon his ability to handle his language. While that premise may seem simple, the implementation of it is often difficult, especially in regular classrooms during the school year. Most teachers simply do not have enough free time to give the personalized instruction needed. The summer program supplies this need with small classes and a generous number of teacher aides and helpers. The curriculum, developed by Principal Evelyn Moore (Coördinator of Compensatory Programs for the Ann Arbor Schools) and Madeleine Coleman (a teacher in the Jones pre-school program and curriculum developer for the summer langauge school), is based to a larg.e extent upon the work of Jean Piaget, the Swiss psychologist, who is one of the leading investigators of the thought processs of chil-' dren, and whose theories have come to be widely accepted in the last few years. It is Piaget's contention that activity and direct experience play a great part in the learning of a child, and that the ability to use language is a direct outcome of this activity. The less school seems like school, the more eagerly the student will particípate (and, generally, the more he will learn). A walk in the woods, for instance, as the class in the top left picture are about to take, under the guidance of assistants Andrei Tyler, Edward Welch, and conservation teacher Bill Bryan, may seem to have little to do with classroom work (except, perhaps, for conservation classes), but One consequence of the use oí this theory has been the setting up in the language program of a great many "field trips" with small groups of children. These field trips are used as "experiences" to build upon in the language program. Of course, the field trips are not considered "school work" to the kids, and henee there is the added benefit of "educating" without really appearing so to the pupils.