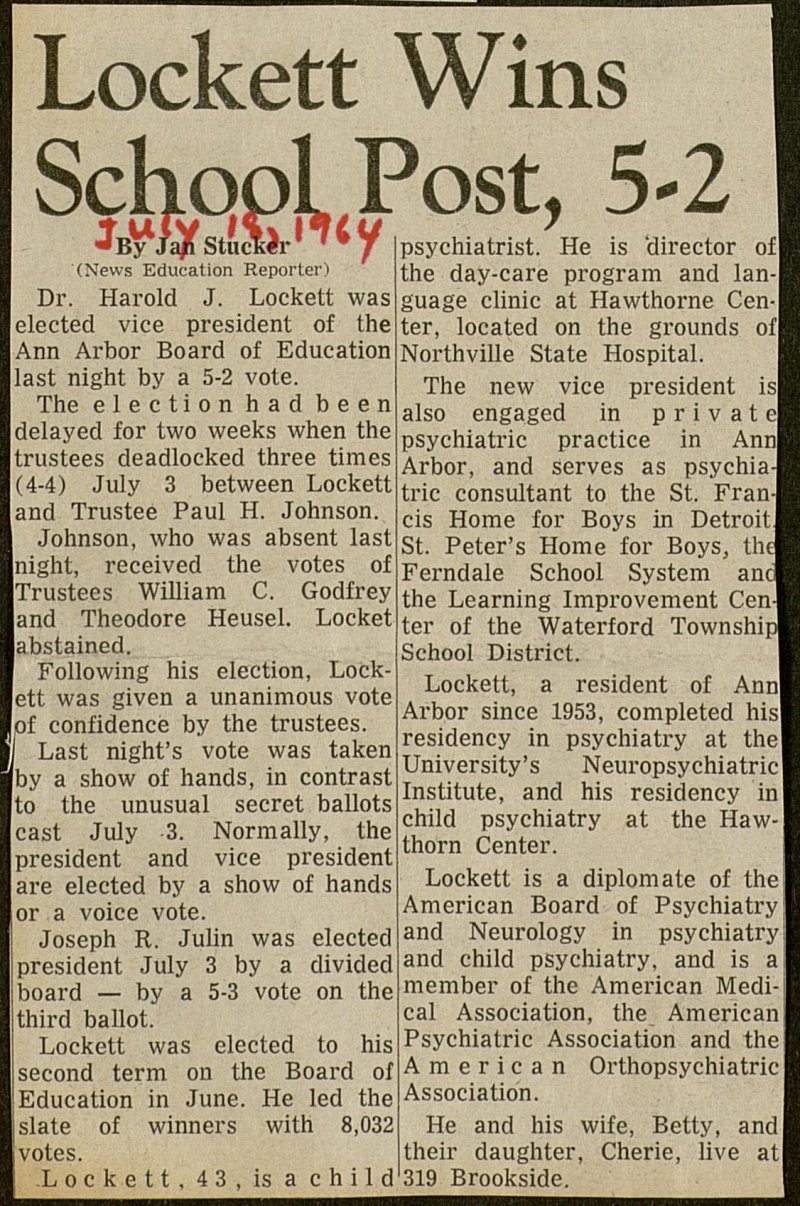 Dr. Harold J. Lockett was elected vice president of the Ann Arbor Board of Education last night by a 5-2 vote. The election had been delayed for two weeks when the trustees deadlocked three times (4-4) July 3 between Lockett and Trustee Paul H. Johnson. Johnson, who was absent last night, received the votes of Trustees William C. Godfrey and Theodore Heusel. Locket abstained. Following his election, Lockett was given a unanimous vote of confidence by the trustees. Last night's vote was taken by a show of hands, in contrast to the unusual secret ballots cast July 3. Normally, the president and vice president are elected by a show of hands or a voice vote. Joseph R. Julin was elected president July 3 by a divided board - by a 5-3 vote on the third ballot. Lockett was elected to his second term on the Board of Education in June. He led the slate of winners with 8,032 votes. Lockett, 43, is a child psychiatrist. He is 'director ofl the day-care program and lan-l guage clinic at Hawthorne Cen-I ter, located on the grounds ofl Northville State Hospital. The new vice president i si also engaged in private! psychiatrie practice in Annl Arbor, and serves as psychia-l trie consultant to the St. FranJ cis Home for Boys in Detroitl St. Peter's Home for Boys, thJ Ferndale School System ancl the Learning Improvement CenJ ter of the Waterford Townshipl School District. Lockett, a resident of Annl Arbor since 1953, completed hisl residency in psychiatry at the University's Neuropsychiatric Institute, and his residency in child psychiatry at the Hawthorn Center. Lockett is a diplómate of the' American Board of Psychiatry j and Neurology in psychiatry! and child psychiatry, and is al member of the American Medi-j cal Association, the American j Psychiatrie Association and the American Orthopsychiatric Association. He and his wife, Betty, and their daughter, Cherie, live at 319 Brookside. !