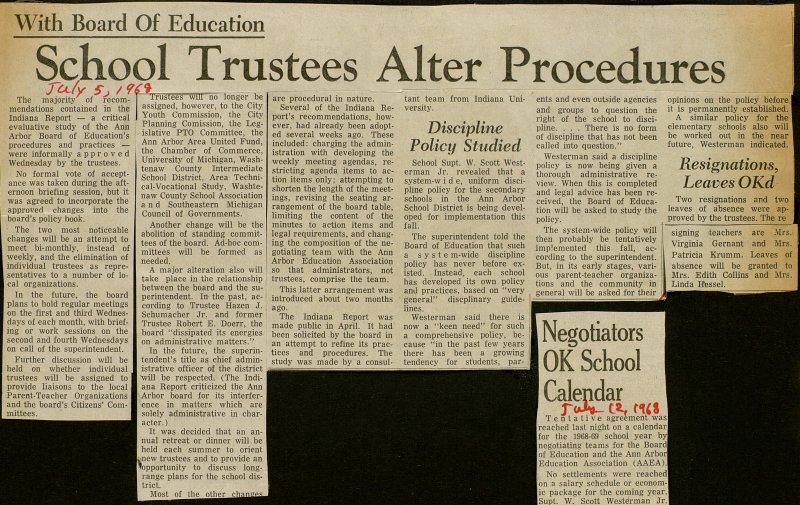 The majority of recommendations contained in the Indiana Report - a critical evaluative study of the Ann Arbor Board of Education's procedures and practices - were informally approved Wednesday by the trustees. No formal vote of acceptance was taken during the afternoon briefing session, but it was agreed to incorpórate the approved changes into the board's policy book. The two most noticeable changes will be an attempt to meet bi-monthly, instead of weekly, and the elimination of individual trustees as representatives to a number of local organizations. In the future, the board plans to hold regular meetings on the first and third Wednesdays of each month, with briefing or work sessions on the second and fourth Wednesdays on cali of the superintendent. Purther discussion will be held on whether individual trustees will be assigned to provide liaisons to the local Parent-Teacher Organizations and the board's Citizens' Committees. irustees wili no longer be assigned, however, to the City Youth Commission, the City Planning Comission, the Legislative PTO Committee, the Ann Arbor Area United Fund, the Chamber of Commerce, University of Michigan, Washtenaw County Intermedíate School District, Area Technical-Vocational Study, Washtenaw County School Association and Southeastern Michigan Council of Governments. Another change will be the abolition of standing committees of the board. Ad-hoc committees will be formed as needed. A major alteration also will take place in the relationship between the board and the superintendent. In the past, according to Trustee Hazen J. Schumacher Jr. and former Trustee Robert E. Doerr, the board "dissipated its energies on administrative matters." In the future, the superintendent's title as chief administrative officer of the district will be respected. (The Indiana Report criticized the Ann Arbor board for its interference in matters which are solely administrative in character.) It was decided that an annual retreat or dinner will be held each summer to oriënt Jiew trustees and to provide an 'opportunity to discuss longrange plans for the school district. Most oftheotherchaTiges. are procedural in nature. Several of the Indiana Report's recommendations, however, had already been adopted several weeks ago. These included: charging the administration with developing the weekly meeting agendas, restricting agenda items to action items only; attempting to shorten the length of the meetings, revising the seating arrangement of the board table, limiting the content of the minutes to action items and legal requirements, and changing the composition of the negotiating team with the Ann Arbor Education Association sö that administrators, not trustees, comprise the team. This latter arrangement was introduced about two months ago. The Indiana Report was made public in April. It had been solicited by the board in an attempt to refine its practices and procedures. The study was made by a tant team from Indiana University. Discipline Policy Studie d School Supt. W. Scott Westerman Jr. revealed that a system-w i d e, uniform discipline policy for the secondary schools in the Ann Arbor School District is being developed for implementation this fall. The superintendent told the Board of Education that such a s y s t e m-wide discipline policy has never before existed. . Instead, each school has developed its own policy and practices, based on "very general" discplinary guidelines. Westerman said there is now a "keen need" för such a comprehensive policy, because "in the past few years there has been a growing tendency for students, ents and even outside agencies and groups to question the right of the school to discipline. . . . There is no form of discipline that has not been called into question." Westerman said a discipline policy is now being given a thorough administrative review. When this is completed and legal advice has been received, the Board of Education will be asked to study the policy. The system-wide policy will then probably be tentatively imp'emented this fall, according to the superintendent. But, in its early stages, various parent-teacher organizations and the community in general will be asked for their opinions on the policy before I it is permanently established. I A similar policy for the I elementary schools also will I be worked out in the near I future, Westerman indicated. I Resignations, Leaves OKd Two resignations and two leaves of absence were approved by the trustees. The re j signing teachers are Mrs. Virginia Gernant and Mrs. Patricia Krumm. Leaves of absence will be granted to Mrs. Edith Collins and Mrs. Linda Hessel.