Class For Disturbed 'structured, But Not Rigid' 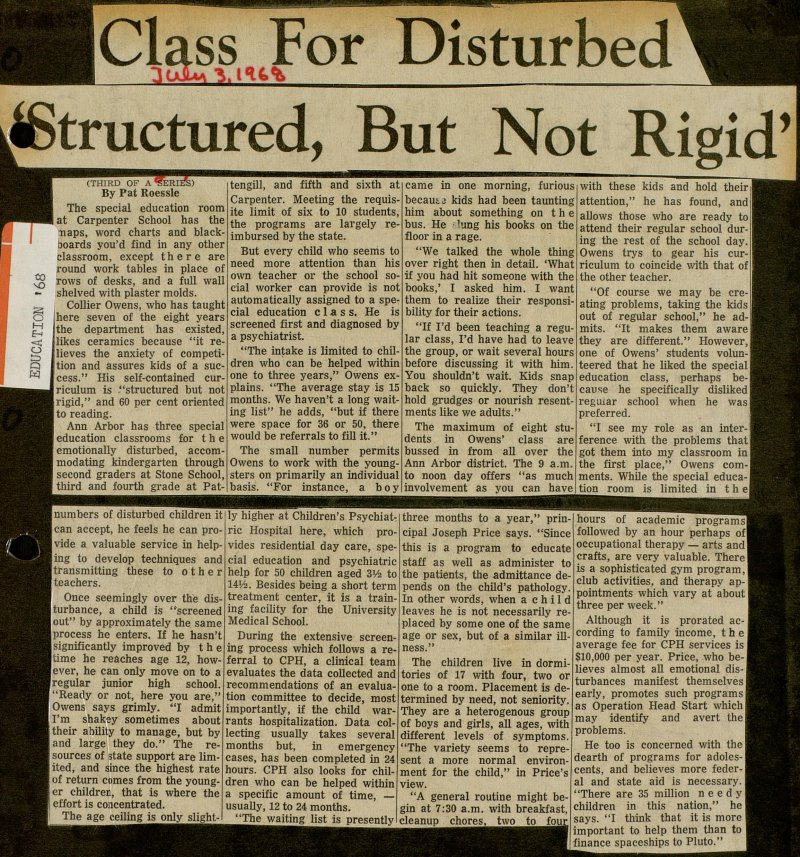 (THIRD OF AJERIES) The special education room at Carpenter School has the naps, word charts and blackboards you'd find in any other classroom, except there are round work tables in place of rows of desks, and a full wall shelved with piaster molds. Collier Owens, who has taught here seven of the eight years the department has existed, likes ceramics because "it relieves the anxiety of competition and assures kids of a success." His self-contained curriculum is ."structured but not rigid," and 60 per cent oriented to reading. Ann Arbor has three special education classrooms for t h e emotionally disturbed, accommodating kindergarten through second graders at Stone School, third and fourth grade at tengill, and fifth and sixth at Carpenter. Meeting the requisite limit of six to 10 students, the programs are largely reimbursed by the state. But every child who seems to need more attention than his own teacher or the school social worker can provide is not automatically assigned to a special education c 1 a s s. He is screened first and diagnosed by a psychiatrist. "The intake is limited to children who can be helped within one to three years," Owens explains. "The average stay is 15 months. We haven't a long waiting list" he adds, "but if there were space for 36 or 50, there would be referrals to fill it." The small number permits Owens to work with the youngsters on primarily an individual basis. "For instance, a boy came in one morning, furious becautj kids had been taunting him about something on t h e bus. He lung his books on the floor in a rage. "We talked the whole thing over right then in detail. 'What if you had hit someone with the books,' I asked him. I want them to realize their responsibility for their actions. "If I'd been teaching a regular class, I'd have had to leave the group, or wait several hours bef ore discussing it with him. You shouldn't wait. Kids snap back so quickly. They don't hold grudges or nourish resentments like we adults." The maximum of eight students in Owens' class are bussed in from all over the Ann Arbor district. The 9 a.m. to noon day offers "as much involvement as you can have with these kids and hold their attention," he has found, and allows those who are ready to attend their regular school during the rest of the school day. Owens trys to gear his curriculum to coincide with that of the other teacher. "Of course we may be creating problems, taking the kids out of regular school," he admits. "It makes them aware they are different." However, one of Owens' students volunteered that he liked the special education class, perhaps because he specifically disliked regaiar school when he was preferred. "I see my role as an inter-i ference with the problems that got them into my classroom in the first place," Owens comments. While the special education room is limited in the numbers of disturbed children il can accept, he feels he can provide a valuable service in helping to develop techniques and transmitting these to o t h e r teachers. Once seemingly over the disturbance, a child is "screened out" by approximately the same process he enters. If he hasn't significantly improved by the time he reacb.es age 12, however, he can only move on to a regular junior high school. "Ready or not, here you are," Owens says grimly. "I admit I'm shakey sometimes about their ability to manage, but by and large they do." The resources of state support are limited, and since the highest rate of return comes from the younger childret, that is where the effort is concentrated. The age ceiling is only ly higher at Children's Psychiat. ric Hospital here, which provides residential day care, special education and psychiatrie help for 50 children aged 3'2 to 14V2. Besides being a short term treatment center, it is a training facility for the University Medical School. During the extensive screening process which follows a referral to CPH, a clinical team evaluates the data collected and recommendations of an evaluation committee to decide, most importantly, if the child warrants hospitalization. Data collecting usually takes several months but, in emergency cases, has been completed in 24 hours. CPH also looks for children who can be helped within a specific amount of time, - usually, 12 to 24 months. The waiting list is presently three months to a year," principal Joseph Price says. "Since this is a program to edúcate staff as well as administer to the patients, the admittance depends on the child's pathology. In other words, when a c h i 1 d leaves he is not necessarily replaced by some one of the same age or sex, but of a similar illness." The children live in dormitories of 17 with four, two or one to a room. Placement is determined by need, not seniority. They are a heterogenous group of boys and girls, all ages, with different levéis of symptoms. "The variety seems to represent a more normal environment for the child," in Price's view. "A general routine might begin at 7:30 a.m. with breakfast, cleanup chores, two to four hours of academie programs followed by an hour perhaps of occupational therapy - arts and crafts, are very valuable. There is a sophisticated gym program, club activities, and therapy appointments which vary at about three per week." Although it is prorated according to family income, the average fee for CPH services is $10,000 per year. Price, who believes almost all emotional disturbances manifest themselves early, promotes such programs as Operation Head Start which may identify and avert the problems. He too is concerned with the dearth of programs for adolescents, and believes more federal and state aid is necessary. "There are 35 million n e e d y children in this nation," he says. "I think that it is more important to help them than to finance spaceships to Pluto."

The Story Of An Autistic &…

The Story Of An Autistic & Hyper-Active 11 Year Old Boy Called "KEVIN"?? The Yorkwoods Center. Boy"!! From On Houseing & Dorme Unit 1-B. Last Dorme Room # 6 & Years placed In & Live there On Unit 1-B. & Atended His Boarding School From In june Of 1970 to Again June Of 1971 When "KEVIN" The Yorkwood Center. Finely Graduated from There In June Of 1971 Finelly Went Back Home to Live for Good. & I Truly was That Very One Autistic & Hyper-Active 11 Year Old Yorkwoods Center. Boy Called "Kevin"
______________________________________________________
*"Yes Dear Sirs;
Yes All Because Of all Of Milti-Child Abuses & Neglets That Went thu with & Suffer From As one Of 11 Year Old Autistic & Hyper Active Boy Student's While Both In School & mostley While Living On Houseing Dorme Unit 1-B. Such As Physical & Mental & Medical & Yes even some Sex About by Both Staff & some Of Other Student's In The Dorme Whild Try Get My Sleep for school Mostley Medical Llike Spikeing My Food & Drink's & Bad Drugs & Hooch & Even Worse Of Radical Active Poison's too Even Mercery Stuff In some Of Food & Drinks & Vax,Shot's for School While I Was Both Living On Unit 1-B. & In School for That 1 Whole From In June Of 1970 to Again June Of 1971 Only + I also Was To Live something Like An "Harry Potter. Llike Life Styial - The Flying On Broom Like An Witch Of Warlock Because Humens Just Ever do that But I Was forced Do Witch & Warloc Craft & Worsup Saten & Make Drink Poson''s An Nother Words Again Spiked Food & Drinks All Againest Very Own Will & The Will Of Parents & Wost while I was In School Part Of The school Atentinng School & Had some P.J's & Under & Socks Stolen from Me right Out Dorme Room & Sold One The Black Markit. In The Bassment Of B-Building Of The Yespilanti State Nut Hospital A Place Called "B-STORE" & It was = to A 5 & 10 Cents Store & with Its Very Own Soda founton + It Even A Barba Shop & A First Class. Movie Theater & All Just Like Hogsmeed Village In The Harry Potter Movies & Books About & Who was The One & Stileing My Bed Close & Such? A Nasty Witch House Mom Staff Lady Named Mrs. Sue Hoouse. Madum Hooch More Like who Would Drink A 5th & 1'2 Bottol Of McMasters Scotch A Day + Change Smoke 7 & 1/2 Windston 100's King's A Day Even for while On Job There At Yorkwoods Center. & This Get So Drunked Up The e Get Mad Burn A Of Little Autistic Boys On For-Arms & Their Privit's To Just Hear then Scream. Beside Stile some Of Close too & Cuss Them At Times ! Could Priveley Like Tell Even More Just Really Happed to While I Was Out there In The Care At Yorkwoods Center. Sp. Eadd. Boarding / Yespilanti State Nut Hospital Campiss. Once On Platt Road Between Beamis & Willis Rd's In Yespilanti Michigan old ("York-Township') Michigan.s
& Now I Em Married for 14 Years Nearly & Now Live In Carmi IL At 205 W. Cherry St. 62821. Ph 1-618-382-3015. Call Me My E-Mails are jkbeaver59@outlook.com Or My Alt. E-mail Is johnkbeaver7@gmail.com
& P.S Now In Latter Years Iem Having Bad Health Probums Such As I Lost About 1/2 Of Tyride for Tumer About Size Of Great Frount + I Lost My Gall Bladder It Dined Inside Of Me & Had Removed & Iem A Brittlel Bad Diebetic & Have Noe Take 4 Insoin Shot A Day for It + My Hand & Body Nerve Trimmers Haver Now Gotton Much Worser Evin In My Sleep All Because 1 Year's Stay Out At Yorkwoods. Center. & Just All Child Abuses & Negets That I Had Really Suffered Whiale School & 24 House Our A Day Care On Unit 1-B At Yorkwoods Center Sp. Eadd Boarding School & Now Iem Trueley Sick Healthwise Because Of All "HELP"???: "KEVIN"
Mr.John,Kevin,Beaver. Nearley Age,60: