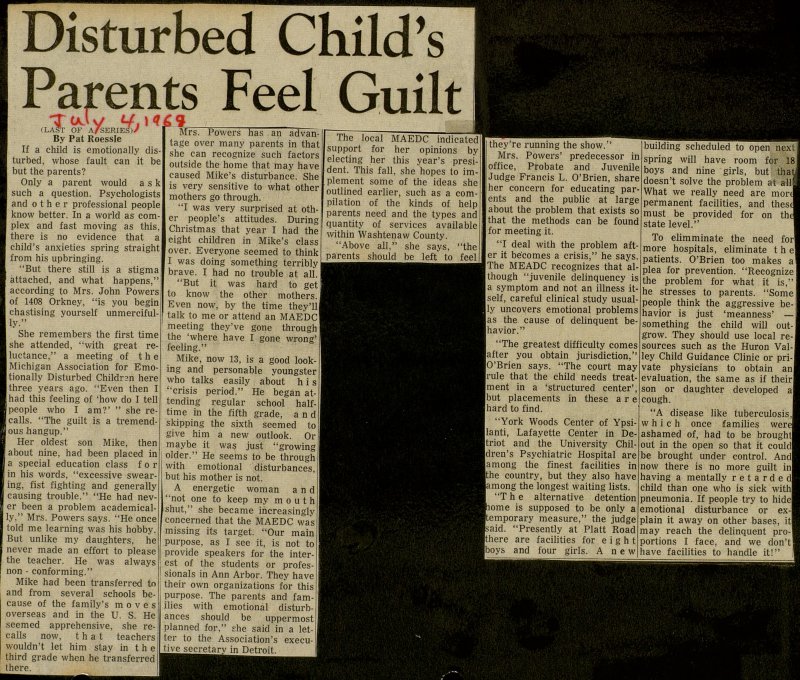 (LAST OF aTsERIES If a child is emotionally disturbed, whose fault can it be but the parents? Only a parent would a s k such a question. Psychologists and o t h e r professional people know better. In a world as complex and fast moving as this, there is no evidence that a child's anxieties spring straight from his upbringing. "But there still is a stigma attached, and what happens," according to Mrs. John Powers of 1408 Orkney, "is you begin chastising yourself unmercifully." She remembers the first time she attended, "with great reluctance," a meeting of the Michigan Association for Emotionally Disturbed Childr;n here three years ago. "Even then I had this feeling of 'how do I teil [people who I am?' " she recalls. "The guilt is a tremendous hangup." Her oldest son Mike, then about nine, had been placed in a special education class for in his words, "excessive swearing, fist fighting and generally causing trouble." "He had never been a problem academically," Mrs. Powers says. "He once told me learning was his hobby. But unlike my daughters, he never made an effort to please the teacher. He was always non - conforming." Mike had been transferred tn and from several schools because of the family's moves overseas and in the U. S. He seemed apprehensive, she recalis now, t h a t teachers wouldn't let him stay in t h e third grade when he transferred there. Mrs. Powers has an advantage over many parents in that she can recognize such factors outside the home that may have eaused Mike's disturbance. She is very sensitive to what other mothers go through. "I was very surprised at other people's attitudes. During Christmas that year I had the eight children in Mike's class over. Everyone seemed to think I was doing something terribly brave. I had no trouble at all. "But it was hard to get to know the other mothers. j Even now, by the time they'U talk to me or attend an MAEDC meeting they've gone through the 'where have I gone wrong' I feeling." Mike, now 13, is a good looking and personable youngster who talks easily about nis "crisis period." He began attending regular school halftime in the fifth grade, andl skipping the sixth seemed to give him a new outlook. Or maybe it was just "growing older." He seems to be through with emotional disturbances, but his mother is not. A energetic woman and "not one to keep my m o u t h shut," she became increasingly concerned that the MAEDC was missing its target. "Our main purpose, as I see it, is not tol provide speakers for the inter-l est of the students or I sionals in Ann Arbor. They have 1 their own organizations for this 1 jurpose. The parents and II ilies with emotional I anees should be uppermost I planned for," Lhe said in a I ter to the Association's execu-1 tive secretarv in Detroit The local MAEDC indicated support for her opinions by electing her this year's president. This fall, she hopes to implemcnt some of the ideas she outlined earlier, such as a compilation of the kinds of help parents need and the types and quantity of services available within Washtenaw County. "Above all," she says, "the parents should be left' to feel they're running the show." Mrs. Powers' predecessor in office, Probate and Juvenile Judge Francis L. O'Brien, share her concern for educating parents and the public at large about the problem that exists so that the methods can be found for meeting it. "I deal with the problem after it bëcomes a crisis," he says. The MEADC recognizes that although "juvenile delinquency is a symptom and not an illness itself, careful clinical study usually uncovers emotional problems as the cause of delinquent behavior." "The greatest difficulty comes after you obtain jurisdiction," O'Brien says. "The court may rule that the child needs treatment in a 'structured center', but placements in these are hard to find. "York Woods Center of Ypsilanti, Lafayette Center in Detriot and the University Children's Psychiatrie Hospital are among the finest facilities in the country, but they also have among the longest waiting lists. "T h e alternative detention home is supposed to be only a temporary measure," the judge said. "Presently at Platt Road there are facilities for e i g h t boys and four girls. A n e w building scheduled to open next spring will have room for 18 boys and nine girls, but that doesn't solve the problem at all What we really need are mord permanent facilities, and thesd must be provided for on thd state level." To elimminate the need for more hospitals, elimínate t h e patients. O'Brien too makes a plea for prevention. "Recognize the problem for what it is," he stresses to parents. "Some people think the aggressive behavior is just 'meanness' - something the child will outgrow. They should use local resources such as the Huron Valley Child Guidance Clinic or private physicians to obtain anl evaluation, the same as if their son or daughter developed a cough. "A disease like tuberculosis] w h i c h once families werel ashamed of, had to be broughtl Dut in the open so that it couldj be brought under control. Andl now there is no more guilt inl laving a mentally retarde dl :hild than one who is sick withl pneumonía. If people try to hidel ;motional disturbance or ex-J Dlain it away on other bases, itl nay reach the delinquent pro-l jortions I face, and we don't lave facilities to handle it!"