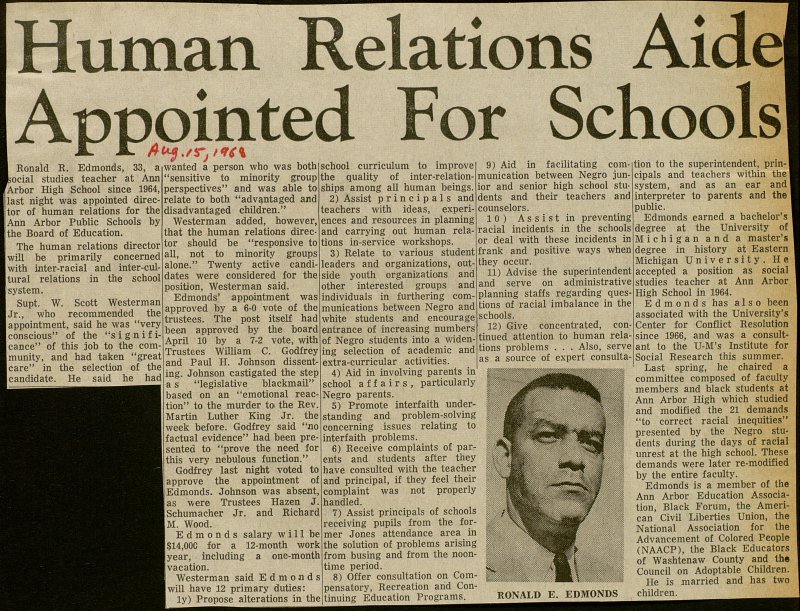 I Ronald R. Edmonds, 33, a feocial studies teacher at Ann Arbor High School since 1964, last night was appointed director of human relations for the Ann Arbor Public Schools by the Board of Education. The human relations director will be primarily concerned with inter-racial and inter-cultural relations in the school system. Supt. W. Scott Westerman Jr., who recommended the appointment, said he was "very conscious" of the "signifiI canee" of this job to the community, and had taken "great care" in the selection of the candidate. He said he had wanted a person who was both "sensitive to minority group perspectíves" and was able to relate to both "advantaged and disadvantaged children." Westerman added, however, that the human relations director should be "responsive to all, not to minority groups alone." Twenty active candidates were considered for the position, Westerman said. Edmonds' appointment was approved by a 6-0 vote of the trustees. The post itself had been approved by the board April 10 by a 7-2 vote, with Trustees William C. Godfrey and Paul H. Johnson dissenting. Johnson castigated the step a s "legislative blackmail" based on an "emotional reaction" to the murder to the Rev. Martin Luther King Jr. the week before. Godfrey said "no factual evidence" had been presented to "prove the need for this very nebulous function." Godfrey last night voted to approve the appointment of Edmonds. Johnson was absent, as were Trustees Hazen J. Schumacher Jr. and Richard M. Wood. Edmonds salary w i 1 1 be $14,00C for a 12-month work year, including a one-month vacation. Westerman said Edmonds will have 12 primary duties: ly) Propose alterations in the school curriculum to improve ;he quality of inter-relationships among all human beings. 2) Assist principáis and eachers with ideas, experiences and resources in planning and carrying out human relaions in-service workshops. 3) Relate to various student eaders and organizations, outside youth organizations and other interested groups and individuals in furthering communications between Negro and white students and encourage entrance of increasing numbers of Negro students into a widening selection of academie and extra-curricular activities. 4) Aid in involving parents in school a f f a i r s , particularly Negro parents. 5) Promote interfaith understanding and problem-solving concerning issues relating to interfaith problems. 6) Receive complaints of parents and students after they have consulted with the teacher and principal, if they feel their complaint was not properly handled. 7) Assist principáis of schools receiving pupils from the former Jones attendance area in the solution of problems arising from busing and from the noontime period. 8) Offer consultation on Compensatory, Recreation and Continuing Education Programs. 9) Aid in facilitating communication between Negro junior and senior high school students and their teachers and counselors. 10) Assistin preventing racial incidents in the schools or deal with these incidents in frank and positive ways when they occur. 11) Advise the superintendent and serve on administrative planning staffs regarding questions of racial imbalance in the schools. 12) Give concentrated, continued attention to human relations problems . . . Also, serve as a source of expert tion to the superintendent, prin- cipals and teachers within thel system, and as an ear and I interpreter to parents and the I public. I Edmonds earned a bachelor's I degree at the University of I Michigan and a master's degree in history at Eastern Michigan University. He accepted a position as social studies teacher at Ann Arbor High School in 1964. Edmonds has a 1 s o been associated with the University's Center for Conflict Resolution since 1966, and was a consultant to the U-M's Institute for Social Research this summer. Last spring, he chaired a committee composed of faculty members and black students at Ann Arbor High which studied and modified the 21 demands "to correct racial inequities" presented by the Negro students during the days of racial unrest at the high school. These demands were later re-modified by the entire faculty. Edmonds is a member of the Ann Arbor Education Association, Black Forum, the American Civil Liberties Union, the National Association for the Advancement of Colored People (NAACP), the Black Educators of Washtenaw County and the Council on Adoptable Children. He is married and has two children.