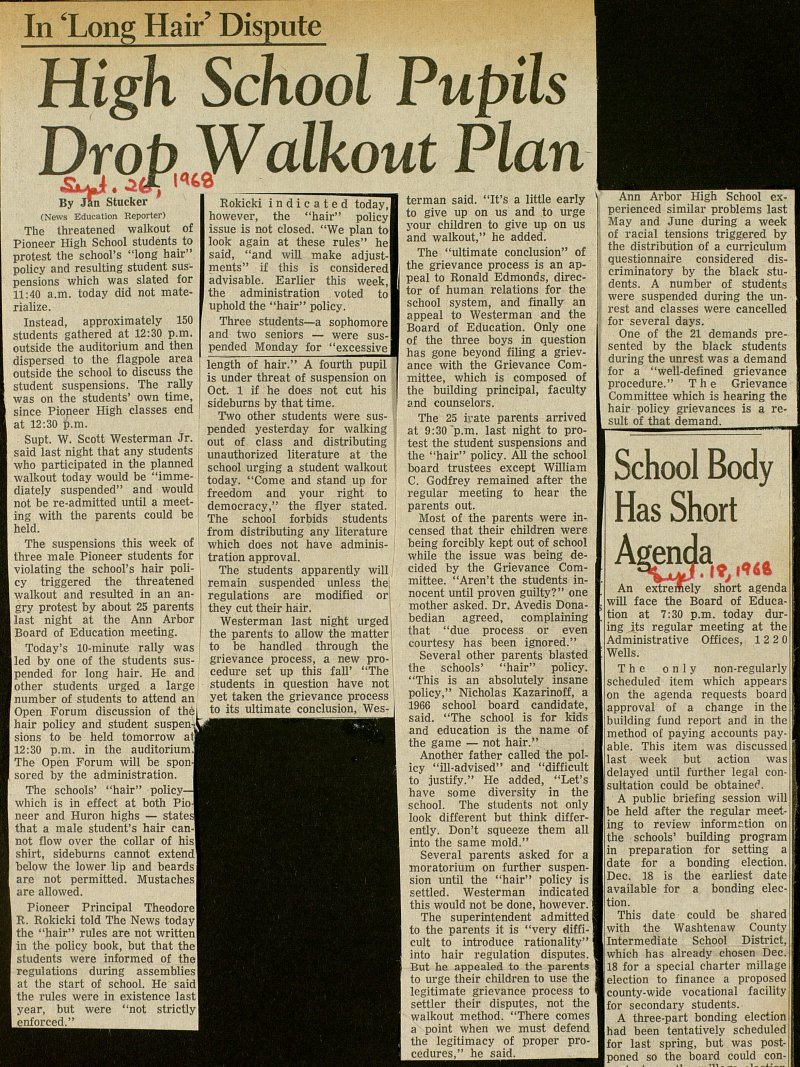 The threatened walkout of Pioneer High School students to protest the school's "long hair" policy and resulting student suspensions which was slated for 11:40 a.m. today did not materialize. Instead, approximately 150 students gathered at 12:30 p.m. outside the auditorium and then dispersed to the flagpole area outside the school to discuss the student suspensions. The rally was on the students' own time, since Pioneer High classes end at 12:30 p.m. Supt. W. Scott Westerman Jr. said last night that any students who participated in the planned walkout today would be "immediately suspended" and would not be re-admitted until a meeting with the parents could be held. The suspensions this week of three male Pioneer students for violating the school's hair policy triggered the threatened walkout and resulted in an angry protest by about 25 parents last night at the Ann Arbor Board of Education meeting. Today's 10-minute rally was led by one of the students suspended for long hair. He and other students urged a large number of students to attend an Open Forum discussion of thèi hair policy and student suspen-tj sions to be held tomorrow atl 12:30 p.m. in the auditorium! The Open Forum will be spon-l sored by the administration. I The schools' "hair" policy- I which is in effect at both Piol neer and Huron highs - statesl that a male student's hair can-l not flow over the collar of hisl shirt, sideburns cannot extendí below the lower lip and beardsl are not permitted. Mustachesj are allowed. Pioneer Principal Theodorel R. Rokicki told The News today the "hair" rules are not writtenl in the policy book, but that the students were informed of the regulations during assemblies at the start of school. He said the rules were in existence last year, but were "not strictly enforced." Rokicki indicated today, however, the "hair" policy issue is not closed. "We plan to look again at these rules" he said, "and wiE make adjustments" if this is considered advisable. Earlier this week, the administration voted to uphold the "hair" policy. Three students- a sophomore and two seniors - were suspended Monday for "excessive length of hair." A fourth pupil is under threat of suspension on Oct. 1 if he does not cut nis sideburns by that time. Two other students were suspended yesterday for walking out of class and distributing unauthorized literature at the school urging a student walkout today. "Come and stand up for freedom and your right to democracy," the flyer stated. The school forbids students from distributing any literature which does not have administration approval. The students apparently will remain suspended unless the regulations are modified or! they cut their háir. Westerman last night urged the parents to allow the matter to be handled through the grievance process, a new procedure set up this falT "The students in question have not yet taken the grievance process to its ultímate conclusión, terman said. "It's a little early to give up on us and to urge your children to give up on us and walkout," he added. The "ultímate conclusión" of the grievance process is an appeal to Ronald Edmonds, director of human relations for the school system, and finally an appeal to Westerman and the Board of Education. Only one of the three boys in question has gone beyond filing a grievance with the Grievance Committee, which is composed of the building principal, faculty and counselors. The 25 ii-ate parents arrived at 9:30 "p.m. last night to protest the student suspensions and the "hair" policy. All the school board trustees except William C. Godfrey remained after the regular meeting to hear the parents out. Most of the parents were incensed that their children were being forcibly kept out of school while the issue was being decided by the Grievance Committee. "Aren't the students innocent until proven guilty?" one mother asked. Dr. Avedis Donabedian agreed, complaining that "due process or even courtesy has been ignored." Several other parents blasted the schools' "hair" policy. "This is an absolutely insane policy," Nicholas Kazarinoff, a 1966 school board candidate, said. "The school is for kids and education is the name of the game - not hair." Another father called the policy "ill-advised" and "difficult to justify." He added, "Let's have some diversity in the school. The students not only look different but think differently. Don't squeeze them all into the same mold." Several parents asked for a moratorium on further suspension until the "hair" policy is settled. Westerman indicated this would not be done, however. The superintendent admitted to the parents it is "very difficult to introduce rationality" into hair regulation disputes. But he appealed to the parents to urge their children to use the legitímate grievance process to settler their disputes, not the walkout method. "There comes a point when we must defend the legitimacy of proper procedures," he said. Ann Arbor High School experienced similar problems last May and June during a week of racial tensions triggered by the distribution of a curriculum questionnaire considered discriminatory by the black students. A number of students were suspended during the unrest and classes were cancelled for several days. One of the 21 demands presented by the black students during the unrest was a demand for a "well-defined grievance procedure." The Grievance Committee which is hearing the hair policy grievances is a result of that demand.